UMass men’s basketball looking to get back on track 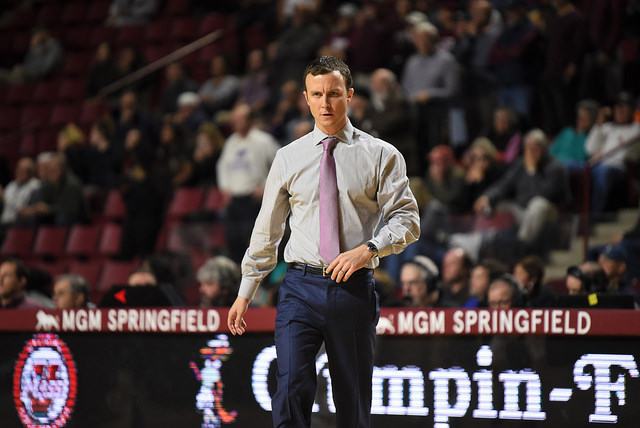 Coming off a sloppy 74-71 loss to Harvard Tuesday night, all eyes will be on the Massachusetts men’s basketball team as it looks to bounce back against Howard at the Mullins Center Friday night.

UMass (2-1) struggled all over the floor against a Harvard team missing its top two players, and the final margin belied how much better the Crimson played. Now, the Minutemen have had three days to turn it around before hosting Howard, which boasts its first 3-0 start since 1979-80.

“One of two things happen when you get smacked in the face,” coach Matt McCall said. “I think this is our first sign of adversity with this team. I think you can either feel sorry for yourself and play a victim role, or you can get back to work and really look yourself in the mirror and say, ‘Okay, I’ve got to get better, these are the areas I need to get better in, I want to get coached, I want to get taught, I want to get pushed.’ I have concern going into this game, calling it like it is, just where we’re at as a team right now and how we’re feeling going into the game.”

For the third straight game, UMass was sloppy on the defensive end, allowing Harvard to open up a 10-point lead near the end of the first half and maintain control of the game down the stretch. Defensive breakdowns also allowed UMass Lowell back into the game on opening night, as the Minutemen watched a 16-point lead cut to three before hanging on for the win.

“Our communication, it’s just kind of inconsistent right now,” sophomore Carl Pierre said. “Some possessions we talk a lot, some possessions we don’t talk enough, so I think we need to keep working on that, keep building on it.”

While not as big a name as Harvard, Howard comes in with a high-scoring offense led by guard R.J. Cole and forward Charles Williams. As a freshman last year, Cole averaged 23.7 points per game.

“Eventually, it’s a pride thing,” McCall said. “You have to be able to guard the basketball. A lot of times, it’s not a skill that can be taught, you just have to sit down and guard.”

While star junior Luwane Pipkins scored 36 points Tuesday night, he was one of only two players with double-digit points. The Minutemen offense fell completely on Pipkins, who almost willed them to a win regardless.

Pierre, projected to be the secondary scoring threat for UMass, had an especially rough night, shooting 0-5 from the floor and 0-3 from deep. McCall, who called Pierre “one of the most resilient guys on our team,” said Pierre’s struggles were more about UMass’ shot selection.

“We have to do a better job of finding him,” McCall said. “Again, this goes back to coaching and teaching these guys how to win. If I go down the lane and I jump off one leg and try to shoot some crazy shot when Carl Pierre is lifting and wide open on the wing, I have to make that play. That’s making the game easier for each other, that’s making the right play.”

The game against Howard continues a five-game homestand, which will conclude with a game against Arkansas-Pine Bluff Monday before the Minutemen fly to Las Vegas for two tournament games. Given the short turnarounds, UMass needs to shore things up quickly to keep pace with preseason expectations.

“With a young, inexperienced team, we’ve got to work through some of this doubt and really teach them and coach them how to win,” McCall said. “Bottom line is, no one on this team has. Transfers, freshmen, guys that are here, nobody’s won, so we have to learn how to win. The other night was a good test for us in regards to that, and we’re going to find out a lot about our team tomorrow night on how we respond.”