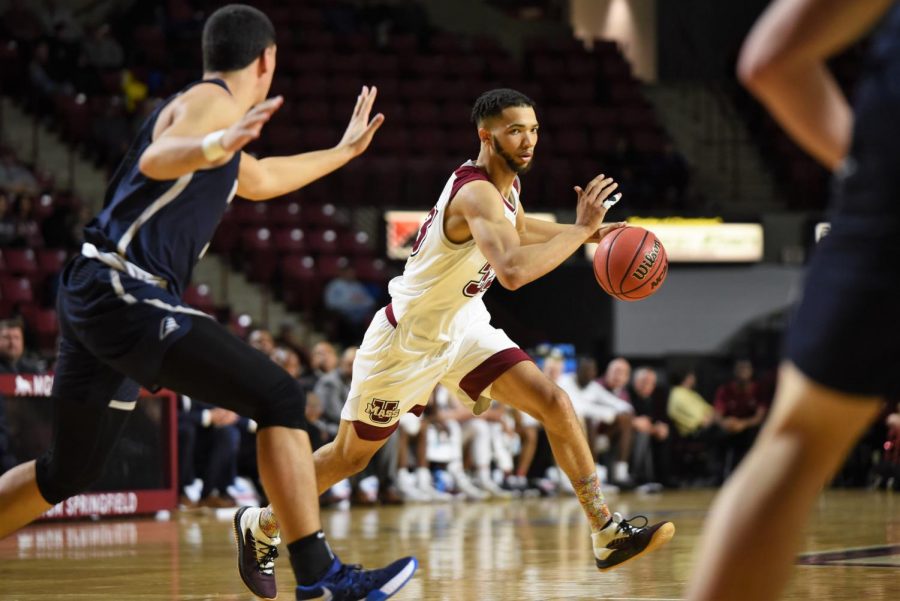 After two consecutive wins to start the season, the Massachusetts men’s basketball team will face one of its toughest non-conference opponents on Tuesday, taking on Harvard at the Mullins Center.

Game planning for a team like the Crimson (1-1) starts with their big man in the middle, Chris Lewis. The junior was selected to the All Ivy-League first team a season ago, and has scored 20 and 17 points in Harvard’s first two games this season.

The Minutemen (2-0) know they will have their hands full with containing the Harvard big man, making it an emphasis that he is not the one to beat them.

“Chris Lewis is arguably the best front court player we are going to play all year,” UMass coach Matt McCall said. “He’s capable of having huge nights on both ends of the floor. He’s so physical, so big, strong, jump hooks with his left and right hand, blocks shots, he does everything. We have to make sure we do a good job on him.”

UMass will head into the matchup coming off an impressive performance against New Hampshire in which the Minutemen shot 66 percent from the field and 52 percent from three. It was a balanced attack, with five different players scoring in double digits.

With the blowout win, UMass was able to play its whole roster and not give anyone extended minutes, which will allow them to be fresh on Tuesday.

While the Crimson are always a threat, they are heading to Amherst without their full arsenal of weapons. Bryce Aiken, who scored a career-high 30 points in last seasons matchup with the Minutemen, and reigning Ivy League player of the year Seth Towns are both expected to miss the game due to injuries.

Even still, McCall knows that Harvard is a deep and talented team, and is not taking the battered Crimson lightly.

“They’re a good basketball team,” McCall said. “Those guys are out, that’s one thing, but this is a very, very good team still. They found a way to win a lot of games, they were one game away from the NCAA tournament last year without Aiken. I think that goes to show you just how good of a team they are.”

UMass had its heart broken a year ago in Cambridge when the two teams met, as Aiken hit a buzzer-beating three pointer in overtime to give Harvard the victory.

It’s no surprise that the game came down to the wire, as in their last five matchups, each game has been decided by six or less points.

“I told our team today, that feeling in the locker room after our game last year was not fun,” McCall said. “Whether you were at the game or not it was not fun. It wasn’t a fun bus ride home. Let’s not waste an opportunity by not being ready to go. I think our guys are excited to play, I think they know what’s at stake in a game like this. Harvard’s been the standard in the state.”

This year’s Minuteman squad looks far different than the team the Crimson saw a year ago, and new players like Curtis Cobb are ecstatic about the opportunity to play in their first true rivalry game.

“I’m excited, especially being from Mass, I know how important it is, an in-state rivalry,” Cobb said. “Me and Jon [Laurent] actually took the trip there last year and we watched how they hit that buzzer-beater and we felt it just as much as they did out there, so we’re ready to go.”