UMass offense looks to find its stride against Central Connecticut

Minutewomen scored just 18 points in the first half against Towson 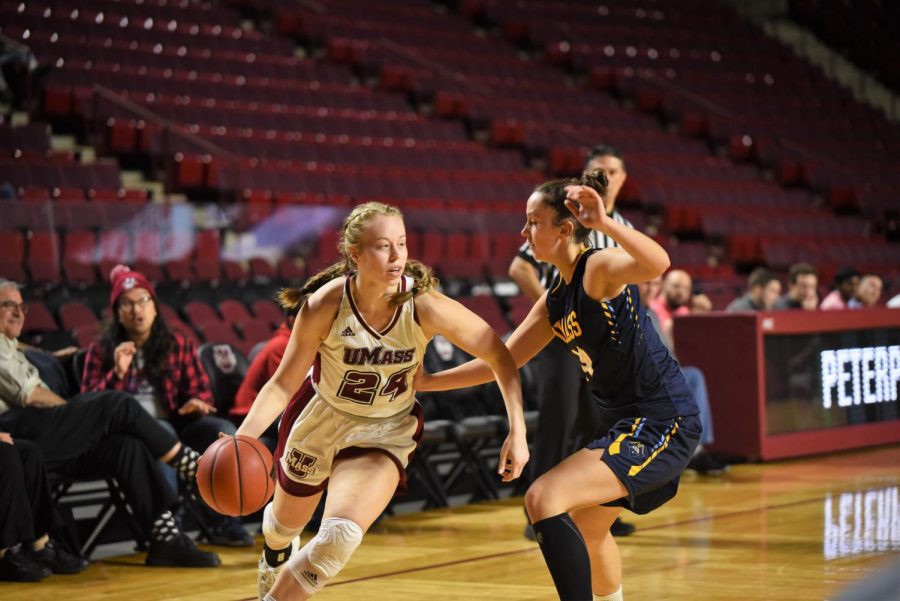 “You got to give Townson credit for what they did to us defensively,” UMass coach Tory Verdi said. “But I think we’ll definitely grow from this past experience.’

Although UMass struggled to find its offensive rhythm against Towson, Verdi is not concerned about his team’s ability to score. He feels its only a matter of time until they find success from behind the three-point arc.

“We did a really good job at collapsing the defense and kicking it out,” Verdi said, “and instead of knocking down the three, we missed it.”

The Blue Devils (0-3) head into Saturday’s game allowing 76.3 points per game, while the Minutewomen are averaging 65.5 through their first two contests.

The Minutewomen started slowly on Sunday, scoring just nine points in each of the first two quarters.

One reason for UMass’ slow start offensively has been junior Hailey Leidel’s inconsistency shooting the basketball. After leading the team in scoring a year ago, Leidel is averaging 12 points a game on the young season.

A preseason All-Atlantic 10 selection, Leidel has shot just 32.1 percent from the field and is 2-for-8 on three-pointers, well below her career 38.3 percent clip.

“Its not a problem,” Verdi said of Leidel’s shooting woes. “I expect her to come out here on Saturday and probably have one of the best games of her career. She’s the last one that I’m worried about.”

While Leidel has struggled early in the season, the Minutewomen’s most consistent offensive threat has been Bre Hampton-Bey. The sophomore is averaging 15.5 points and 3.5 assists through two games. Her strong start comes off a year in which the guard earned an Atlantic 10 All-Rookie Team selection.

“I think we have to collect ourselves and be good in practice,” Hampton-Bey said. “We just have to learn from our mistakes, if we play our offense and push the ball and attack in transition, I think we’ll be fine.”

UMass managed just 10 points off turnovers and six fast break points in its last game, deflections and steals being a point of emphasis from Verdi. Being able to push the pace of the game following turnovers is something the Minutewomen are hoping will change against a winless Central Connecticut squad.

A struggling Central Connecticut team could be just what UMass needs to bounce back offensively.