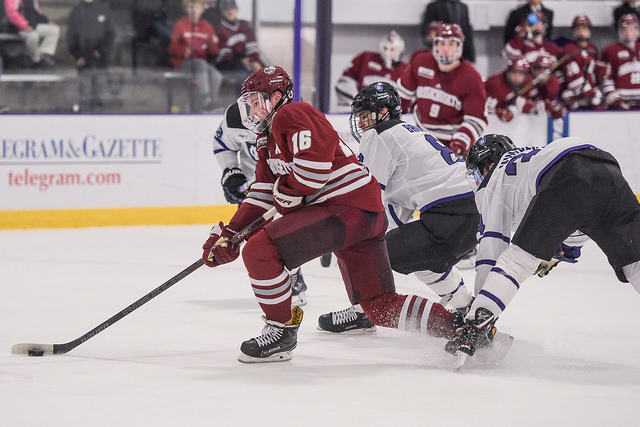 WORCESTER, Mass.–It’s the best start in almost 50 years, and the Minutemen keep on rolling.

“There’s no easy wins at this level and tonight I thought we played a good 60 minutes,” said UMass coach Greg Carvel. “You want it to be easy but it never is. Holy Cross played exactly how we thought they would, good speed up and down the ice and they competed hard.”

No. 4 UMass (9-1-0, 5-0-0 Hockey East Association) was more dominant than even the two-goal advantage suggests, as the Minutemen were fairly in control throughout, save for some nervy moments in the final period.

“Definitely it was a little hectic at some points, but I think we stayed poised and we handled it,” Kaiser said. “[Lindberg] our goalie played outstanding and backed us up a couple times, so it’s just everyone doing their part and making sure to take care of business.”

Chaffee continued his stellar sophomore season to get UMass started early, pouncing on a bad Holy Cross (1-7-1, 1-3-1 Atlantic Hockey Association) turnover in the offensive zone and slipping one past Crusader goaltender Erik Gordon to open the scoring at 6:55 of the first.

Holy Cross came out fast in the second, and only needed 38 seconds to level things as Jack Surowiec buried a rebound to make it 1-1. It was the lone blemish on Filip Lindberg’s record for the night, as the freshman netminder made 20 saves.

“Just a very up-and-down game, they pushed us really hard and we knew it was going to come,” said Makar. “But I think we weathered the storm at times, but at other times let them kind of get in our heads, but at the end of the day it’s a learning curve for our relatively young team.”

The Minutemen had a couple great chances in the second — John Leonard threw a beautiful between-the-legs pass out front from behind the cage, but Niko Hildenbrand fired it over — and with a 42-21 shot advantage on the night, expected to do a little more. The Crusaders did a nice job of keeping pucks from the net, with 20 total blocks on Friday.

“A lot of teams know we’re a very high-tempo offensive team,” Makar said, “and in the [offensive] zone we have a lot of moving components, but it’s however they want to defend it and I think they did a pretty good job today, but we still found ways to work around it.”

In the end, the Minutemen needed an unlikely duo to break the deadlock in the final frame.

Mario Ferraro threw one up the left boards to Kurt Keats, who gained the zone on a two-on-one with Kaiser before sliding it across to his linemate in the slot, and Kaiser ripped it over Gordon’s left shoulder to put UMass back ahead early in the third.

The Minutemen had other chances in the third, but tried to make a couple extra passes on some scoring chances that eventually passed them by.

“I thought their goalie was really good,” Carvel said. “We also saw late in the game we’re passing up chances to shoot pucks. We had odd-man rushes, we don’t even get shots on net. I think we should have shot pucks there.

“It was a good up-and-down the ice game. Both teams were trying to play fast north and south and we had some defensive zone break downs that gave them chances, particularly in the first period and one late in the third, but I thought our team was solid tonight.”

The fourth-liners put the Minutemen in control, and Makar did the rest, firing the puck the length of the sheet for the empty-netter with 22 seconds to play to ice the game.

The Minutemen return home on Sunday to host New Hampshire at 2 p.m.