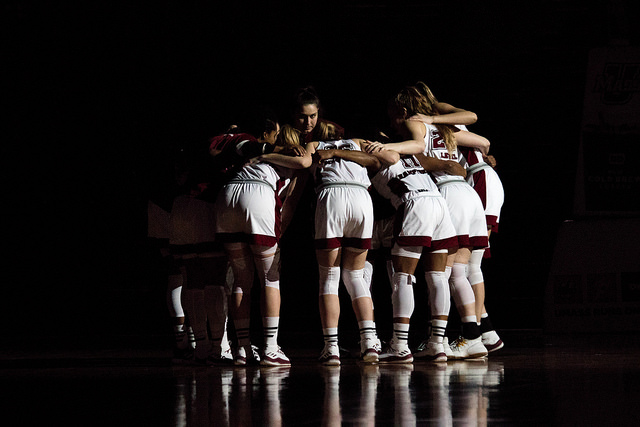 In all five of its wins this season, the UMass team (5-2) has had three or more players score in double figures, a trend they’ll look to continue versus the Fighting Hawks (1-3) on Wednesday.

“That’s what we need,” UMass coach Tory Verdi said about the diverse scoring effort. “Last year, a lot of times we were kind of one-dimensional, so we need that. We gotta score by committee.  It’s great to see Hailey [Leidel] getting some double-doubles. We need her to be in double figures, we need Bre Hampton-Bey to be in double figures and always someone else whether it’s Destiney [Philoxy], whether it’s Paige [McCormick], we need a little bit more offensive production.”

Both Leidel and Hampton-Bey have done their part on offense so far this season, tallying double digits in six of seven games. Additionally, center Anil Soysal has scored double-digits in four games, Philoxy and Jessica George twice each and McCormick once.

“It’s just nice to have somebody who’s [6-foot-5] who can duck in and finish around the rim,” Verdi said. “Our players are doing a really nice job of attacking the rim and drawing her defender over and dropping off passes to her. She can catch and finish. Obviously, we lost a lot with Maggie Mulligan leaving so we needed some post production and Anil’s given that to us.”

Though the UMass offense has been clicking so far this season, not all Minutewomen have found their offensive stride early in the season. Wing Genesis Rivera has yet to record a double-digit scoring effort this season after tallying 12 last season.

“[Genesis’s] minutes have been limited here recently,” Verdi said. “We’re hoping she gets back on the floor and continues to execute offensively for us. She continues to work hard in practice so hopefully she’ll be able to provide with a little bit more offensive production here tomorrow night.”

Though they haven’t needed her offensive prowess early on, a breakout for Rivera could add more scoring to an already potent UMass offensive attack.

The success of the offense has certainly taken a load off the backs of Hampton-Bey and Leidel so far this season. Though they lead the team in scoring, sharing the load on offense has allowed the duo to feel less pressure to score.

“I feel like for the past three years that’s kind of fell on my shoulders a lot,” said Leidel. “I definitely feel like that, or that I need to like step it up overall [when the offense isn’t functioning]. Just like encouraging other people too, so they can step it up too as well.”

Of course, both Leidel and Hampton-Bey aren’t fearful of the big moment. Each of the two have stepped up big in the past where the UMass offense didn’t show up, most recently being Leidel’s 28-point, 13 rebound performance against Texas Rio Grand Valley earlier this season.

“We were just kind of playing with them and then at the end of the game, I just kind of stepped it up and kind of like realized what I had to do to take care of the game,” said Leidel about her performance against UTRGV.

Leidel believes the opening of the game is indicative of how the UMass offense will perform throughout the contest.

“The first couple of possessions you can kind of tell the momentum of the game and where it’s at,” Leidel said. “I’ll just get a feel for how I’m playing and how my teammates are playing and then I’ll kind of go ahead from there to see what maybe I need to try and do more of or just kind of like go with the flow.”

The first few possessions in Wednesday’s matchup versus North Dakota may tell whether the UMass offensive stride will continue against the Fighting Hawks. Nevertheless, if the UMass offense does come out shaky, Leidel and Hampton-Bey are ready to take control.