Tournament pushes Minutewomen to 5-2 this season 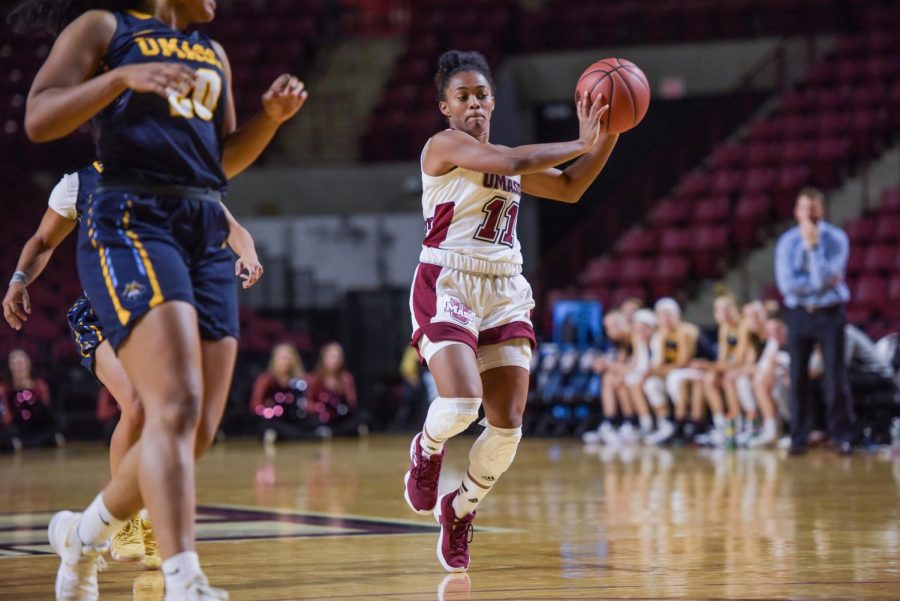 The Massachusetts women’s basketball team was able to find success over the weekend in the Brown University Turkey Tip-Off. Playing the likes of Bucknell, Brown and Fairfield, the Minutewomen (5-2) went 2-1 over the weekend.

Stout defense on Sunday pushes Minutewomen ahead of Fairfield

On Sunday, the Minutewomen defeated Fairfield by a score of 59-49. UMass was able to dominate the Stags (2-4) defensively, holding them to a poor 26.8 field goal percentage during the effort.

In the winning effort, captain Hailey Leidel earned herself a double-double with 17 points and 12 rebounds.

“She was able to knock down some good shots for us, and her ability to just go in and rebound for us is something that we need from her,” added Verdi. “Hopefully she can stay on this track for double-doubles.”

For their efforts throughout the tournament, both Leidel and Hampton-Bey were named to the All-Tournament team.

The Massachusetts offense was all but unstoppable on Saturday, as it was able to defeat Brown 90-61. Four of the five UMass starters were able to earn double-digits in the scoring column to push them past the Bears (4-4).

Leading the offensive charge with 18 points apiece, Hampton-Bey and Leidel shot a flaming 61.5 percent and 53.8 percent respectively. Anil Soysal also added 15 points on 70 percent shooting from the interior, helping the Minutewomen dominate the points in the paint effort 48-12. Captain Jessica George rounded out the starting scoring effort with 12 points of her own.

Off the bench, Destiney Philoxy added a bench-high nine points and dished out five assists.

Not to be lost in their potent offensive attack was the play of the Minutewomen defense. The tenacious defensive effort from UMass allowed them to force 19 turnovers.

“I think against Brown we were clicking on all cylinders defensively,” added Verdi. “They were throwing different things at us defensively and our players did a great job regardless of what defense they were in to continue to attack it and get high percentage shots.”

Opening up the Brown Turkey Tip-Off, the Massachusetts women’s basketball team was unable to defeat Bucknell, falling to the Bison (5-2) 77-58.

UMass fell behind early, trailing after the first quarter 28-11. The Minutewomen had no answer for the Bison, who shot a stellar 11-of-15 from the field during the opening frame.

Hampton-Bey lead the offensive charge for UMass, scoring 13 points on a solid 5-of-11 from the field. From the bench, Philoxy added 11 points of her own, but it wasn’t enough to push the Minutewomen on top.

The Bison shot 14-of-30 from behind the 3-point arc, allowing them to blow past the Minutewomen in the scoring column and control the pace of the game.

Not to be lost in the effort was UMass captain Hailey Leidel’s 1000th career point. Late in the fourth quarter, Leidel netted an and-one layup from the left block to push her career total over the millennium marker. Leidel is the 20th player in UMass history to eclipse this milestone.

Though they couldn’t come out on top in the tournament opener, Verdi looked at the loss as a learning experience for the young Minutewomen team.

“The way we were capable of playing, and for whatever reason we just looked a little bit lethargic and a little bit slow,” Verdi said about the effort against Bucknell. “We didn’t really have a ‘want-to.’ That’s uncharacteristic of us and we needed to have a little bit more energy. This team definitely brought that the next two nights.

“Great tournament for us for the fact that you play three games in three days. It teaches our players what postseason play is like and playing something like this definitely prepares them for what’s down the road.”

The Minutewomen will look to continue their momentum from the tournament into Wednesday’s matchup against North Dakota. Tip-off is set for 4:30 p.m. at the Mullins Center.

Dan McGee can be reached at [email protected]  and on Twitter @DMcGeeUMass.