Stickers and flyers were found in Herter, on lamp posts 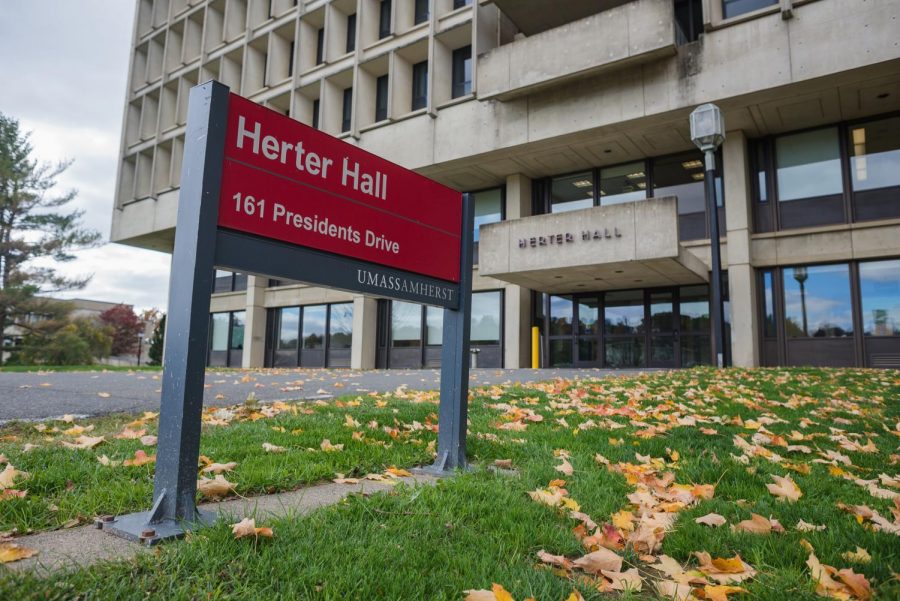 Several flyers and stickers for “Identity Evropa,” a white nationalist group designed to recruit college-aged men, were discovered across the University of Massachusetts on Wednesday morning.

Stickers were found displayed on lamp posts around the campus pond as well as posters hanging on bulletin boards on multiple floors of Herter Hall. “European roots American greatness” was written underneath the name “Identity Evropa.” A statue of Andrew Jackson in Jackson Square in New Orleans, Louisiana was also on the poster.

According to several photos from Identity Evropa’s official Twitter account, a staple of the group has been to set up flyers and posters across college campuses and major cities in America such as University of Rochester, Downtown Salt Lake City and University of Illinois.

The group, which was founded in 2016, is designated as a hate group by the Southern Poverty Law Center and described as an organization focused on “raising white racial consciousness, building [a] community based on shared racial identity and intellectualizing white supremacist ideology.”

UMass student Benjamin Wiley, a junior studying classics, said that his Greek class had noticed a flyer hanging in their classroom on the sixth floor of Herter Hall.

“I had Greek this morning, and I got to class about 15 minutes early,” Wiley said. “I was just sitting there, talking to someone else and I looked up on the poster board and I saw that there was an Identity Evropa poster… We took it to one of the floor administrators because we thought it was likely there were more.”

After his class, Wiley said he was sitting in the history department lounge on the sixth floor of Herter Hall when he noticed a second poster hanging on the board there.

“I took that one down and brought it to a different administrator on that floor,” Wiley said.

Later that day, Wiley said he was talking to his Italian professor on the third floor of Herter, where he was informed that professors had found more flyers across the building.

“I’ve read about [Identity Evropa] in the news a lot, they’re pretty active,” Wiley said. “I know they’re really widespread across the country and I know that they are active on college campuses.”

Sonya Epstein, a freshman studying social thought and political economy who uses they/them pronouns, said their writing teacher brought their class out to take a look at a sticker on a lamp post near the Integrative Learning Center.

“Since we’ve been talking a lot about activism and topics around that, my teacher, who is a graduate student, was telling us about this group because she saw their stickers around campus,” Epstein said. “She took us out of the classroom so we could see the stickers, and she explained to us what the group was.”

Epstein posted a photo of the sticker on the popular Facebook group “Overheard at UMass” in an attempt to warn other students about what was being displayed across campus.

“I had never heard of this group before, and I knew that if I had personally walked past one of those I wouldn’t have given it a second glance because I didn’t know what it was,” Epstein said. “I just want people to be aware of what is happening on their campus, I want people to know who they are.”

Epstein, who lives in Melville Hall, the site of a racist incident last September, said that they found the flyers and stickers “horrifying.”

“There hasn’t been that much action being taken by the administration to counteract this and make the campus safe for everyone,” Epstein said. “It’s gotten to the point where it’s hate speech and it isn’t okay in any shape or form…it makes me upset and angry.”

History Department Chair Brian Ogilvie said that he was not sure when exactly the posters were hung up in Herter Hall, but that they were spread around the building. In addition to the posters on the sixth and third floor, another poster was found on the fifth floor and four were found in first and second floor classrooms.

“No one noticed them yesterday, so a good guess is that they went up either last night or this morning,” Ogilvie said.

Ogilvie said that he and other administrators had contacted Anna Branch, associate chancellor for equity and inclusion about the incident.

“We are currently leaving to [Branch] the decision on the proper way to handle this,” Ogilvie said. “I think Dr. Branch is in the position to determine what should be done about this in regard to working with campus leadership.

“Personally I think that it’s sickening that people are trying to spread this message of white supremacy and hate. It’s nothing that we want to be associated with. If any students are concerned about seeing this, they should go and talk to their professors about this.”

“The University denounces these acts of hate and intimidation,” Ed Blaguszewski, executive director of strategic communications at UMass, said in a statement. “University of Massachusetts Police were notified and are investigating the matter.”

This story has been updated to include a statement from the University. It was also updated to reflect the correct pronouns of a person quoted.