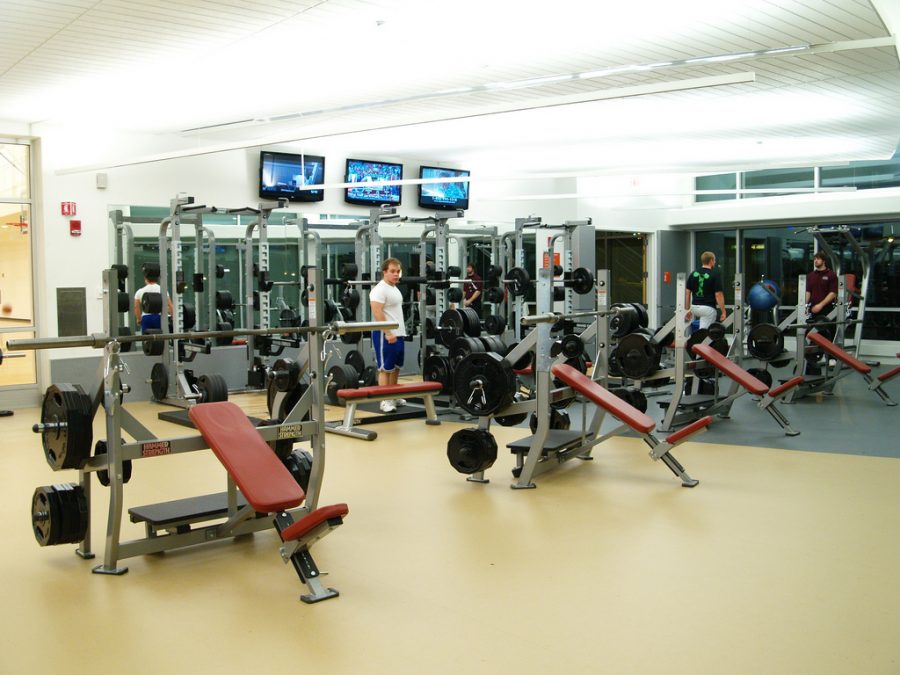 Some readers know and have expressed this exasperated sentiment many times before. To serve 30,000 undergraduate and graduate students, not to mention faculty, staff, and locals, the UMass Recreation Center has only three sets of the equipment required to perform a couple very popular strength training exercises associated with powerlifting: particularly squats and deadlifts that build powerful glutes and thighs. Lauded for their benefits, these leg-focused workouts generally keep all of the University’s squat racks occupied throughout the average day and often prompt queues of men hoping to get a pump in after or even between classes.

Though there are more supplies available and more options if you want to work other muscles, the weight room as a whole can get overcrowded at peak times. This section of the gym, separated from the cardio machines and stretching spaces, is noticeably dominated by men. I used to refer to the entire weight training area of the gym as “the boys’ room” and refused to venture inside.

I was all but sedentary in high school. In college, I began taking Zumba classes and doing trusty treadmill and low-impact, mostly cardio and ab focused workouts with new girlfriends who had some experience. Eventually, I gained confidence in my physical ability to do more, but I could barely imagine doing it in the feared “boys’ room.” My home YMCA had a women’s weight room populated mostly by the middle-aged and elderly women that allowed me to try weight lifting away from the gaze of men during breaks.

I was lucky to have a close male friend very well acquainted with gym culture and squat racks. He easily ambled up to current users to inquire about how many reps were left so we could work out together when I returned to the UMass weight rooms.

When I finally mustered up the courage to go without him, I quickly discovered the secret. If I went at 6 a.m. when the gym opened, the squat racks were magically cleared of waiting men. It wasn’t completely empty, but there was almost never a line. I no longer had to fear spectators and I certainly wasn’t the only girl.

Now I recognize many of the other morning regulars. I’ve started to sense that there’s a turnover in the crowd. From what I’ve seen lately, more and more girls are showing up and claiming racks, especially in the morning. Not only that, but many are lifting extremely heavy weights. I notice the same thing in the weight room. I see girls crushing bicep day and destroying the bench press when I look around. I can’t be sure if this is a real change or my own biased expectation while these women have always been present, but it is reassuring nonetheless.

Entering the workout world is intimidating, especially for women, and gaining independence often comes through having a partner in the beginning. A major part of this has to do with the necessity of competition for space and for equipment, as well as the social pressures for women to avoid bulkiness or visible strength.

Social media may be a huge help in encouraging women to venture to the weightlifting side of the gym, allowing women to see others in the strength training world.

It is important to note though that many fitness influencers are not qualified to offer such training. Users should prioritize safety and ask gym personnel or trainers, who will answer your questions for free, to ensure proper form.

Besides overall social pressures, men can sometimes also be guilty of unknowingly discouraging women by implying that the space is not theirs, even if that is not their intention.

I’ll paint the picture. As per usual, the three squat racks are filled, populated by more than eight people, as is not uncommon. Of those, maybe there is one woman who is perhaps just beginning her planned workout. Or maybe she doesn’t have one and simply wants to push until she’s ready to stop. Regardless, there is an overwhelming tendency of newcomers to first approach the woman rather than the men to ask the dreaded “how many sets left?” This can feel like a reminder that this is not our space, implying the men are more deserving and have ownership over the equipment.

I understand the question of bias. I’ll admit I have not conducted a true statistical analysis, but through observation and hearing from many female and male gym-goers alike, it’s a noticeable trend.

The growing numbers of women with the confidence to engage in whatever physical activity suits them regardless of stereotype or association is encouraging. I would love to empower women to try out different types of exercise that offer broad benefits to individuals’ physical and mental health. Weight training in particular can promote overall heart and bone health, reduce cancer risk, and often increase confidence as you watch yourself grow in lifting ability. But I acknowledge the undercurrent of barriers simply to entering the room and encourage those already in it to make it welcoming. I promise you, whatever you expect, no one is watching your workout for anything more than ideas for their own.

Emma Waldman can be reached at [email protected]