About 30 people attended the lighting 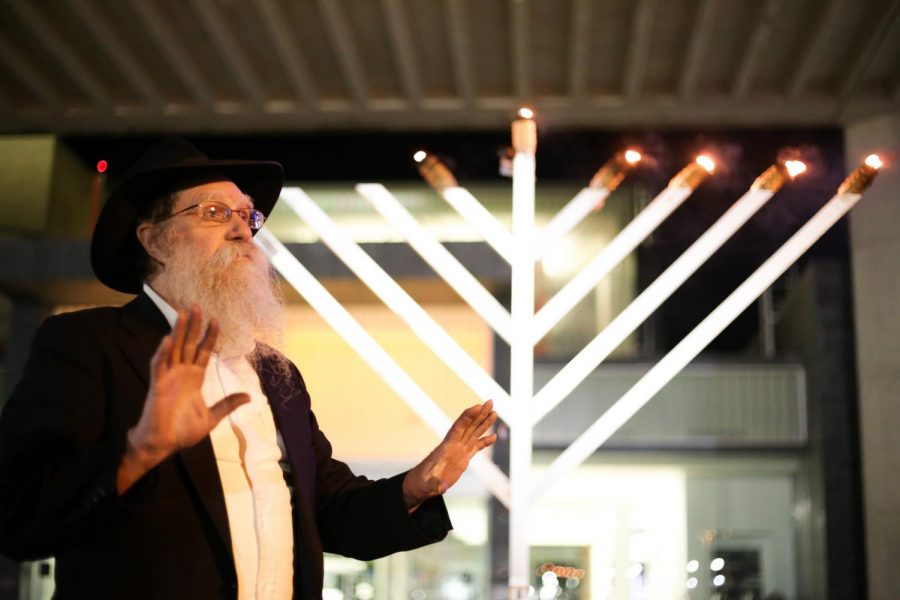 On the fifth day of Hanukkah, a crowd of about 30 people gathered outside of the Fine Arts Center at the University of Massachusetts Thursday evening for a lighting of the menorah.

The event was hosted by Rabbi Chaim Adelman, co-director of the Chabad House at Amherst. During the lighting, Adelman led the audience in song and prayer as Joe Frank, a senior marketing major and psychology minor at UMass, lit five of the eight candles.

Preceding the lighting, Adelman gave a brief history of Hanukkah and why the menorah is lit, explaining how about 2,000 years, during the second temple period, the Greeks were persecuting the Jewish people until a small group of Jews resisted adopting Greek traditions and culture and successfully defeated the Greek forces. Following the fight, the Jewish people found a small amount of undefiled oil to light a menorah in their temple.

“They put [the oil in], it takes eight days to make new oil, until they go to the place and they make it a special way,” Adelman said. “They put it in the menorah and miraculously it burned for eight days. That is why we have eight branches on the menorah.”

During the lighting, the audience sang Hebrew prayers followed by a reciting of a prayer in English that recalled the lighting of the menorah and emphasized the religious nature of the act.

Food and refreshments were also served, including doughnuts, chocolate coins and hot cider.

Frank, in organizing the event, was fortunate they were able to have the event on such short notice.

“We had to get the outdoor event land use request for this spot from the University and that normally takes two weeks to do that, and we reached out to them about two days ago, and they were able to put it through in about 24 hours,” Frank said.

Adelman felt the ceremony represented a universal message of the freedom of individuals to practice their religion and thus, felt it was crucial to have the ceremony on public property.

“This country has provided us with freedom of religion, to practice our faith fully openly, and that’s why we seek to do it on public property,” Adelman said. “We want the public property, the government, in this case UMass, to affirm that we are capable and able, that they support us in our desire to express ourselves Jewishly.”

The event was held by the Chabad House, which provides many services for Jewish students at UMass, including educational opportunities, services during Shabbat on Friday night and Saturday day and volunteer programs, such as Helping Hands. The program is run by Yocheved Adelman, the co-director of the Chabad House, and involves Jewish and non-Jewish students providing aid for elderly citizens in the community.

The event was also hosted by UMass Hillel, which looks to “empower students through the vitality of Jewish life to cultivate purposeful, healthy lives and relationships that better our community and world,” their mission statement reads.

In her closing statements, Yocheved Adelman took note of a “Dignity & Respect Sign” that hung on the walls of the FAC, and felt the sign contrasted with the motto of the Greeks 2,000 years ago, which she claimed was “might makes right.”

She went on to emphasize the contrast between the world under the Greeks and the world today represented by the sign.

Editor’s Note: Joe Frank is a columnist and photographer for the Massachusetts Daily Collegian.