Hailey Leidel finding her stride for the Minutewomen

Leidel has rebounded since rough outing at Northeastern 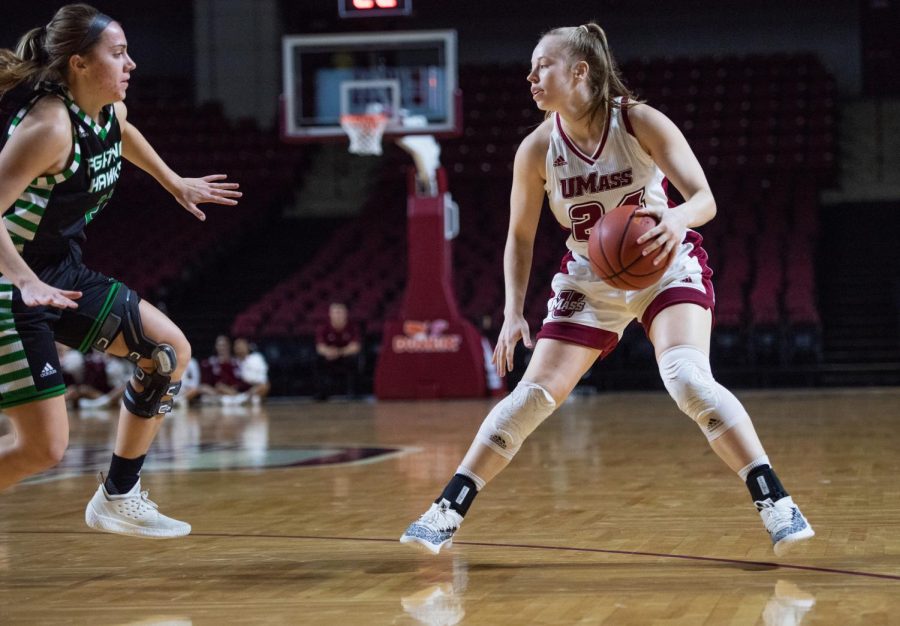 For the Massachusetts’ women’s basketball team, Leidel’s clutch-factor from beyond the arc was a key factor in their 66-55 victory Wednesday night over Boston University.

“We just started running a lot of sets because they went zone and that’s my favorite since I’m a shooter,” said Leidel. “That honestly opened me up a lot. We ran a couple of sets that were designed to get me open and we just executed, and it all worked out.”

UMass head coach Tory Verdi talked about her lethalness as a scorer for the Minutewomen (7-4) after the game.

“She’s shooting the ball really well for us,” said Verdi. “The fact that she scored 15 points from three – we need that point production from her. She’s been doing a really great job of rebounding the ball for us as well, I think she had four offensive rebounds. We need those second chance points. But I really like her effort in those regards and she’s playing 38 minutes a game.”

Wednesday night’s offensive outburst was her second straight 20-point game, as she garnered 20 in the Minutwomen’s last outing in a 71-59 win against Incarnate Word (0-10). It appears as if it’s no coincidence that this hot streak is occurring when it is for Leidel.

Two games prior to the one against BU, the Minutewomen dropped a heartbreaker to undefeated Northeastern (8-0). They lost 53-52 on a buzzer-beater three from guard Shannon Todd.

But for the Minutewomen, the most underwhelming result of that game was Leidel’s production: four points off of a 1-6 day from the field and 0-4 from beyond the arc. For UMass’ leading scorer, the game sparked a desire to never let it happen again.

“I feel like if I would’ve played better against Northeastern, we would’ve come out with the win,” said the Michigan native. “Obviously it was a team loss but I kind of felt responsible. I came back that night and shot and then I came back the next day and shot and then the next day and shot. So just not doing my best, you just have to get back to your work habit and that’s what I did. I’ve been practicing much better and just staying focused and stressing my game.”

Since then, Leidel has been the straw that stirs the drink for the Minutewomen.

“She’s doing a great job for us the last couple games and we need her to continue to be offensively aggressive for us,” said Verdi.

UMass can only hope that her scoring prowess carries her through the rest of the season.

On the topic of scoring, guard Jessica George put up big numbers for the Minutewomen in the first half, as she scored 16 in the first half, 14 of which came in the first quarter. She finished the game with 18 – a new career high. Prior to Wednesday night, her career-high was 16 points.

It’s telling that she topped it in the first half.

“Jess had a great game,” said the coach. “She came out, she was ultra-aggressive, she was knocking down threes. She shot 50 percent from three-point range. That point production helps us. I thought that was her best offensive game.”

George shot 80 percent (4-5) from three-point range in the first quarter, which was the main reason for the Minutewomen heading into the second quarter up 20-13.

“I just stayed motivated, stayed focused,” said George. “I shot really well throughout practice, so I think that just led into the game tonight and I don’t know. I guess I was just hot.”

Was there anything she did or felt that was different before the game?

“I think it’s just a mindset thing,” said George. “I tell myself every time to just come out, play hard, give it all I got, and it just shows on the floor.”

With Philoxy sidelined from a hand injury sustained in practice last week, junior guard Vashnie Perry got a big chance to step up as a floor general.

Perry scored seven points with four rebounds and five assists over 22 minutes logged. Her play caught the attention of the man in charge of her minutes.

“Vash played over 22 minutes,” Verdi said. “We needed her to play. She scored seven points and we need that from her. That fact that Bre (Hampton-Bey) was in foul trouble and she had limited play, Vash came in and did an unbelievable job for us today.”

Her teammates shared praise for her as well.

“She knows what she needs to do, and she knows what she can do,” said Leidel. “All she needs to do is come off the bench. She’s a huge energy player for us, she’s great on defense, she’s a great talker on defense and offense and she’s really good at getting people in their spots. Her coming in and doing what she did tonight was perfect in that it’s exactly what we need from her.”

Philoxy’s injury is day-to-day and UMass believes she’ll be back next week.