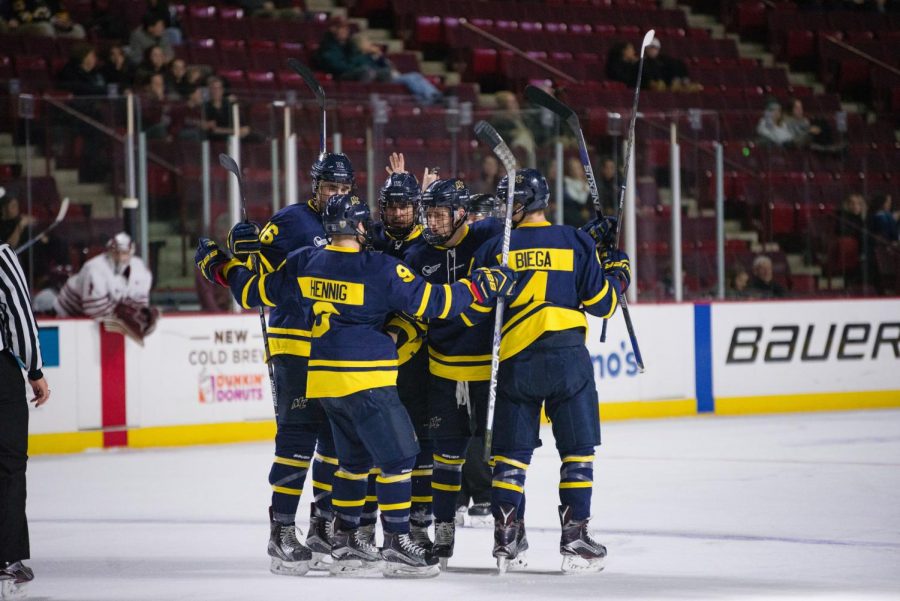 It was a blowout Friday night at Matthews Arena as Northeastern dominated Merrimack with a convincing 9-1 win.

Northeastern had an explosive first period, scoring five out of the eventual nine goals that the Huskies would get past the Warriors (4-10-1, 2-6-0 HEA). The first two came within the first four minutes of the period, leaving Merrimack with an early deficit they would never be able to recover from.

The retaliation soon came from Warrior sophomore Patrick Kramer to cut the deficit to 2-1 in the sixth minute of the game.

From there, the Huskies swept the Warriors with seven unanswered goals.

Solow scored a pair in the span of 1:42 before senior Brandon Hawkins landed a third 15 seconds after, putting the Huskies up 5-1.

The offense continued to dominate, as Solow completed the hat trick with a shorthanded marker five minutes into the second period, followed by another short-hander off the stick of Picking on a breakaway with six minutes to play in the middle frame. Five minutes later, Picking put up another off of a power play and Hawkins closed it out with his second in the third.

The teams will meet again on Dec. 8 at Lawler Rink. The puck is set to drop at 7 p.m.

UML put up the first point of the game in the seventh minute, which was left unanswered by the Engineers until the end of the first period. The River Hawk’s goal was scored by freshman Jon McDonald unassisted after RPI goalie Owen Savory left the net on a delayed penalty call.

It was not until the end of the second period that UML was able to gain a vital lead over the Engineers. Connor Wilson pushed the River Hawks ahead of the Engineers 3-2 with a one-timer off a cross slot pass from Mattias Goransson with a little over one minute left to play in the middle frame.

UML kept the ball rolling with two more unanswered goals in the third. Ryan Lohin tallied another at 7:29 in the third with another feed from Goransson on the left point.

Both Lohin and Goransson managed to put up two points each. Goransson had two assists, and Lohin one goal and an assist. Lohin also had a game-high 11 shots on goal.

Chris Schultz sealed the deal for the River Hawks, putting the team up 5-2 over the Engineers late in the third.

Tyler Wall started in net, posting 18 saves for UML. This was Wall’s 10th start in the net, and his fifth win overall with the River Hawks.

UMass Lowell is scheduled to battle with Boston University next in a home-and-home series.

Grace Sherwood can be reached at [email protected]