Matt Murray goes perfect in first half of season

With win Tuesday night, netminder posted an 11-0-0 record through first half 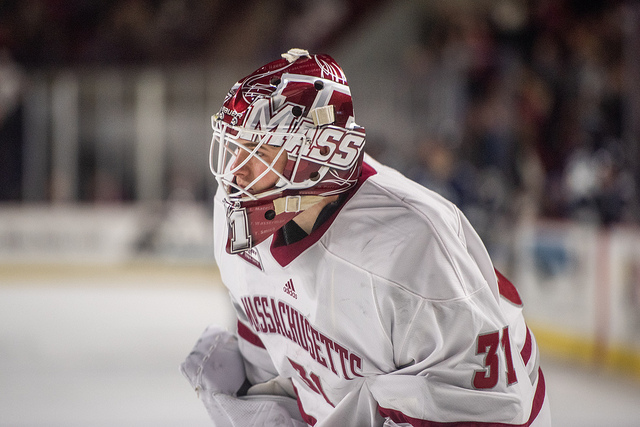 Three months, 11 teams, and not one loss for Matt Murray.

The sophomore is the first Minuteman to go undefeated in the first half of the season in the program’s Division I era. Murray has averaged 25 saves per game, showing an elite level of poise between the pipes each night he’s given the opportunity.

“What a semester for him, 11-0,” coach Greg Carvel said after Tuesday’s win, “you couldn’t have dreamt that at the beginning of the year. We challenged him in September and we’ve pushed him and he’s responded glowingly.”

From posting a season-high 35 saves against then-No. 1 ranked Ohio State, holding Providence’s No. 3 ranked offense in Hockey East to a weekend total of four goals and only giving up one goal against a tenacious Quinnipiac squad last weekend, Murray has been dialed in since October.

Murray stands at the top of the conference in winning percentage with a whopping 11-0-0 record, Cayden Primeau of Northeastern is the closest netminder behind him and he has three blemishes on his record.

Tied for the highest winning percentage in the entire NCAA with Mathias Israelsson of Minnesota State and Andrew Shortridge of Quinnipiac, Murray has put together one of the most impressive starts in Division I hockey, especially considering the teams he has played against.

The 6-foot-1 goaltender has faced three top-10 ranked opponents in Ohio State, Quinnipiac and Providence. He’s given up just four goals one time this season (UConn), coming in the same game the Minutemen had their highest scoring game this year. Otherwise, he’s let up three goals once (OSU) and the rest of the season has been a one or two goal slip.

“It’s something I’m pretty happy about,” Murray said of going undefeated first semester, “I feel like my level of play has been acceptable. I’ve had tremendous help from the guys in front of me, they make my job very easy and that’s lead to our success as well.

“Personally, I feel like I’ve been seeing pucks well and finding things through traffic.”

Carvel noted how even in games like Tuesday, where Murray isn’t contested as much as usual, he is still likely to come up with “big saves to keep the limit on the other team.” Consistency is something the three-year coach mentions often and it’s easy to see how much Murray has embodied that term.

Yale came into Tuesday’s matchup riding a six-game unbeaten streak, averaging four goals per game in the last five opponents it’s faced–Murray held the Bulldogs to half that.

“I think it’s gotten to the point where excellence is a habit for us, it’s not just something that we just happen to stumble upon,” Murray said. “We’ve worked extremely hard to get to this level and it’s great to see everybody getting rewarded.”

Mollie Walker can be reached at [email protected] and followed on Twitter @MWalker 2019.