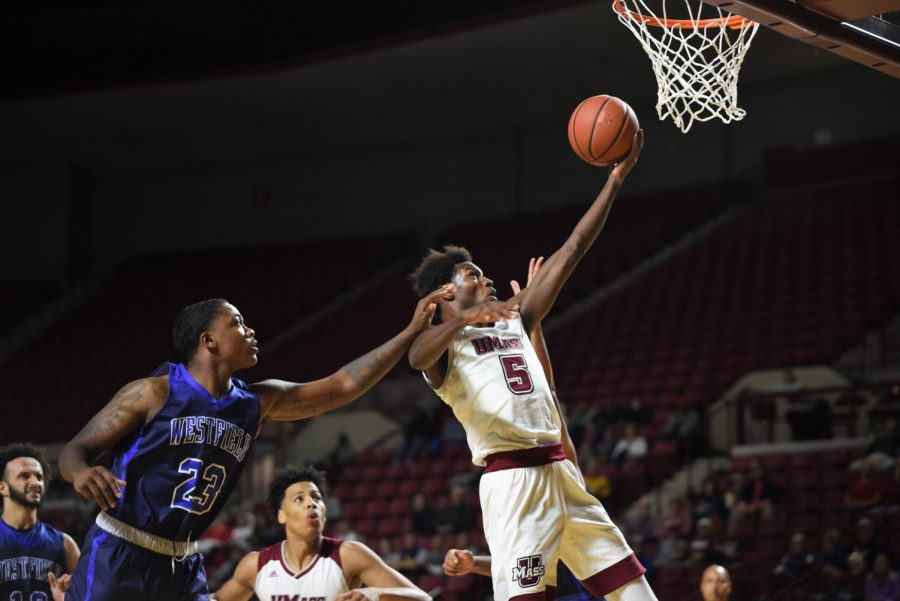 With 20 minutes to go before tip-off against Providence on Friday, the Massachusetts men’s basketball team announced that one of its best defenders, forward Jonathan Laurent, had tweaked his knee and wouldn’t start. Coming off a loss to Holy Cross where Laurent was one of the only players who didn’t struggle, the UMass defense looked to be in for a long night.

In his place, the Minutemen turned to freshman Samba Diallo, who shined in his first career start and helped revitalize a struggling UMass defense.

“For me, when I learned that I was going to start, it was a chance for me to show what I really can do, and really help the team to get whatever we need,” Diallo said. “I’m hoping, whatever coach needs me to do, I’m always ready to do it. So, feels good.”

Diallo saw just nine minutes in the first half as UMass stumbled out of the gate, giving up 50 first-half points and falling into an 18-point hole by halftime. In the second half, as the Minutemen tightened up on defense, Diallo played 18 of 20 minutes.

Appearing solely in relief of Laurent, Diallo, who McCall described before the year as raw but talented, hadn’t seen more than 20 minutes in a game before Friday. Over those first nine games, however, his game made noticeable strides.

“Defensively, early on in the year, he kept coming out of his stance, and guys were going around him,” coach Matt McCall said. “I think late in the game, it may have been [Alpha] Diallo, he was on him, he stayed in his stance the whole possession. The guy couldn’t go around him because Samba’s so long. When we recruited him, the thing we really, really liked about him was his ferociousness and his competitiveness, and that came out tonight in 27 minutes.”

On the final possession, as Providence’s Alpha Diallo drove for a final shot to try to win it, Samba Diallo read the play and pivoted to prevent a potential open-look three like the ones UMass gave up so often in the first half.

“I was right there, I was on the help, and then he just went down the baseline,” Diallo said. “So I didn’t want to let him reverse it on the corner, so I ran right to the corner to stop the shot from there. That’s why he didn’t pass it.”

Diallo contributed across the board, finishing with seven points, 10 rebounds and a steal, without turning the ball over. His points, rebounds, and minutes were personal bests. Throughout the game, his presence gave the Minutemen a spark that they desperately needed.

“Obviously, with Jonathan Laurent being out, I think our staff felt really comfortable starting Samba,” McCall said. “He brings an entirely different life to our program. Talk about a player who’s been through an enormous amount. I was at the game his senior year in AAU when he tore his ACL, and to see where he is now, and the progression that he’s made, but [especially] the energy he brings.”

That energy was crucial for a UMass team that has been searching for an identity for much of the season. A languid stretch against Holy Cross turned a nine-point lead after halftime into a nine-point deficit and an eventual four-point loss. Against Providence, with every excuse to fold, the Minutemen finally found their resolve and played hard the whole way.

“I talked a lot about it at the half,” McCall said, “that when you have the opportunity now to play, make the most of it, and play as hard as you possibly can, and Samba was terrific for us defensively and gave us an unbelievable lift there.”

For Diallo, it was likely the biggest win of his fledgling college career, and he knew how much it could change things for the team going forward.

“It means a lot,” Diallo said. “It means a lot going down. Now we know what we’re capable of. So we just got to bring it every night, and we’re going to be fine.”