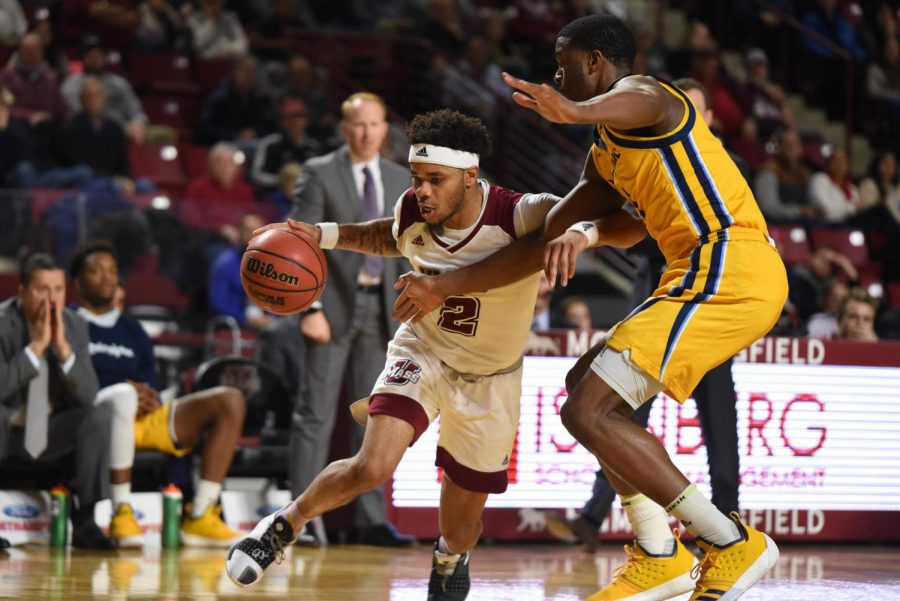 After holding a 10-point lead at the half, the Massachusetts men’s basketball team struggled to get its offense going in the second half of action, ultimately falling to Temple 65-63.

The Minutemen (6-5) had a chance to tie the game late, as Luwane Pipkins ran the clock down and got off a potential game tying three-pointer with 13 seconds left, but missed. Freshman Sy Chatman corralled the offensive rebound and put it up for a score, cutting the Owls (8-2) lead to one.

UMass was then forced to play the foul game. Pipkins fouled Temple’s Shizz Alston Jr., who went to the line and drained both free throws. Keon Clergeot was fouled on the ensuing Minutemen possession, going to the line where he too knocked down both shots at the charity strike to make it a one-point game with five seconds left.

The foul game continued after UMass couldn’t force a turnover, sending Alston Jr. back to the line, where he made the first but missed the second, giving the Minutemen one last shot.

But as was the case with the majority of the second half, where UMass turned the ball over 12 times, Pipkins lost control of the ball and Alston Jr. stole it away to give Temple the victory.

“The game got away from us in the second half there,” UMass coach Matt McCall said after the game on the WEEI radio broadcast. “Really with turnovers. They turned up the pressure a little bit and we didn’t respond the right way at all in that situation. It wasn’t one guy; it was a collection of guys with the turnovers in the second half.

“We could never get into a flow offensively in the second half. They really turned up the heat there. I thought that ultimately that’s what cost us the game.”

Alston Jr. was the game’s leading scorer, dropping 31 points. Quinton Rose was the other Owl in double-figures with 14 points. Pipkins, Clergeot and Jonathan Laurent led the Minutemen, each scoring 12 points.

UMass suffered an injury early in the game, with center Rashaan Holloway going down with a leg injury. He did not return to the game.

Temple’s success on the defensive end in the second half was due to  its tenacity and will. The Owls competed on every possession, not giving the Minutemen anything easy on the offensive end of the floor.

“Especially with Luwane they were being physical, they were denying him,” McCall said on the WEEI postgame broadcast. “We just kept two handlers, trying to initiate offense with him off the ball was a struggle for us and trying to get it back to him and run some pick and rolls. You have to give Temple credit. They turned up the heat defensively and it had a huge impact on our offense in the second half.”

After showing his ablity as a shooter Friday against Providence, Carl Pierre struggled for UMass against the Owls, going 1-7 from downtown and scoring just eight points. Curtis Cobb, another reliable scorer, gave the Minutemen just four points.

While it was a tough loss, McCall wants his team to look forward and understand that their last few games have helped them grow as a squad.

“I told our team in the locker room after, as disappointed as we are that we didn’t win the basketball game, they’re nuts if they don’t think we’ve gotten better and improved over the last two to three weeks,” McCall said.  “That’s the goal and we have to continue to move in the right direction.”