Fine has a plan for change 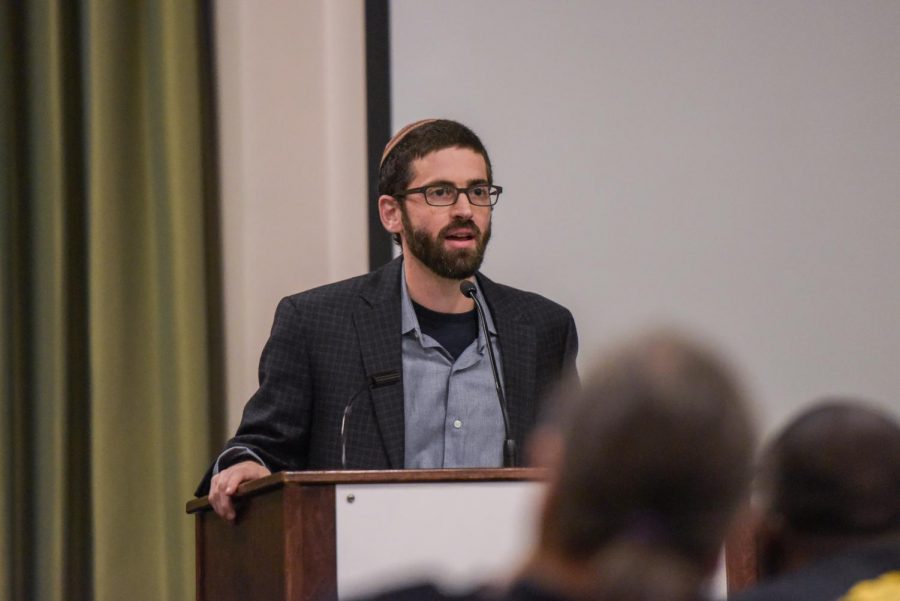 Step inside the doors of the University of Massachusetts Hillel House and you may see the magazine rack first, displaying publications such as “Together,” “Forward” and “Shalom” – that’s “peace” in Hebrew.

Turn around, take in your surroundings and you will notice the couches, the chairs and the table by the door, which has some posters and cards on it. One poster says “Honor Differences. See the Humanity in Everyone.” Another lists the number of a 24-hour crisis hotline for victims of sexual assault and violence.

You used to be able to just walk through Hillel’s entrance into this unassuming yet welcoming room, which is about the size of a large living room. But those days have passed. The doors to the center of UMass’ Jewish community are now locked, and visitors must press a buzzer the door to be let it.

This was inevitable and going to happen anyways, but gut-wrenching and unprecedented events have a way of speeding up change. When I walked into Hillel, I buzzed in and told the voice on the other end of the speaker that I was there to see Rabbi Aaron Fine, Hillel’s executive director.

It can be scary time for American Jews. A month-and-a-half after a gunman stormed the Tree of Life synagogue in Pittsburgh shouting “All Jews must die” and claimed 11 lives Oct. 27, many in the community remain on edge. The thought of “this could have been my temple” isn’t an uncommon one.

In no uncertain terms, there has never been a deadlier attack on American Jews. The collective community has never had to grapple with the reality it faced five weeks ago.

“It’s incredibly sad. I’m not shocked that it happened in a synagogue,” said Fine.

And how could he be shocked? “This is what they had long been fearing,” the Washington Post’s Joe Heim and Samantha Schmidt wrote following the attack. As Neo-Nazi’s marched through the streets of Charlottesville, clad in white polo shirts, carrying tiki torches, chanting “Jews will not replace us,” as swastikas and slurs popped up on college campuses and as Jewish headstones were toppled in graveyards across the country, they knew.

Of the over 1,700 victims of religious hate crimes in 2017, Jews made up nearly 60 percent of the victims, despite making up less than three percent  of the religious population of the U.S. Nationally, hate crimes rose by 17 percent that year, according to the FBI.

Many people, Fine said, can picture being attacked in a synagogue and relate their anger and fear to that sense. For them, “it’s very visceral. Like, ‘oh, I can imagine myself being in synagogue and somebody coming in and shooting people.’”

For others, himself included, “it’s more about the climate of hatred this took place within. For me, personally, that’s the most….” His idea falls off, as he seeks to describe just how he feels about the current state of the nation.

“This has taken place in a country in which hate is being flamed,” Fine continued. He believes that political and media leaders express explicit antisemitism, anti-immigrant sentiment, and other types of bigotry, along with dog whistles that mask their true meanings. “So that, to me, is what is most scary about it. The fact that there was a shooting is not shocking to me.”

Students and staff at Hillel varied in their reactions to the shooting and expressed a range of emotions in the weeks following, as would be the case with any group of people after a tragic event.

Speaking out against racism, antisemitism and homophobia has been a common theme for the University this fall. Multiple times since September, the UMass community has received an email addressing an offensive incident.

However, many incidents have not generated an email from the school, including three last week, when two swastikas and one piece of homophobic graffiti were drawn or carved into separate locations within Baker Hall. One of the swastikas appeared on a Hanukkah sign on an RA’s door.

Fine mentioned that he sometimes feels bad for the University; students want a response and meaningful action, but the school may not have the ability to stop all potential acts.

“It’s a challenge. Because people want somebody else to solve their problem,” he said. “I’m not saying they don’t have responsibility – they do – but it’s on all of us to try and create the campus in a world that is what it should be.”

With hate crimes on the rise across the country, Jewish communities are forced to reconcile their freedom to pray with their safety. At High Holiday services, an armed police officer outside the synagogue door is a common sight.

A year-and-a-half ago, Hillel faced the safety question with a visit from a security consultant. Out of that visit emerged the need to put an extra barrier between the building and an intruder, hence the buzzer at the entrance. The Pittsburgh shooting increased the speed with which that came about.

“I think it’s the nature of the Jewish community that we have awareness that we are a potential target, so we have security on the High Holidays,” Fine said. “It seems crazy, right? To have a police officer standing there when you’re there having a prayer service, but that’s been the reality of the Jewish community for many years.”

A locked door can be the difference in stopping someone who seeks to do harm, but what Fine ultimately sees is a way to prevent there from being a perpetrator at all.

Concretely, he believes that the United States gun laws are insufficient and that the nation seems incapable of changing them, even in the wake of daily reminders.

More abstractly, but far from naïvely, he is leading Hillel on a mission to unite UMass’ often separate groups.

“You’re always going to have racists and people who are ignorant and I’m not sure there’s a way to ever get rid of that,” Fine said. “But there is a way to build stronger community, in particular on a college campus.”

After homophobic graffiti was found in a residential hall, a Hillel representative contacted the Stonewall Center, UMass’ LGBTQ resource center, to offer support. Following the attack in Pittsburgh, the thought was returned from a different ally, the Muslim Students Association, whose president spoke at a vigil remembering Pittsburgh’s victims.

Seizing on this opportunity, Hillel partnered with the Muslim Students Association last year for a joint meal between students of both faiths, allowing them to come together over kosher and halal food, an event that will continue this year.

Will diplomacy – reaching out, uniting people past their differences – work in this case? According to Fine it might just be the answer.

“We have to be smart and not naïve and take measures that will protect our communities,” Fine said. “But I would say that to me the biggest key in the long term is for people to create ways for people to get to know and understand people who are different than themselves.”

“Too often we’re siloed in our particular communities and when people don’t know each other it’s very easy to be susceptible to bias,” he said.

After Pittsburgh, the university community came together at a vigil in the Student Union. “The university was really great in reaching out to us right away asking how they could help,” Fine said. Students honored those killed and included a Black man and woman killed at a supermarket in Louisville, KY that week in a suspected terror attack.

Chancellor Kumble Subbaswamy spoke, as did Alon Confino of the Institute for Holocaust, Genocide and Memorial Studies. Ahmad Hamssa, co-president of the Muslim Student Association, spoke, and noted that Hillel had supported the MSA after Islamophobic graffiti was discovered on a faculty’s door.

The turnout was high, which surprised Fine. If one of the few concrete steps that the collective University can take after an event like Pittsburgh is to offer support, than this achieved that.

At the vigil, he mentioned his son, who he said was already beginning to understand the dangers of the world. Because of this, Fine had chosen not to talk his son about Pittsburgh.

The unfortunate reality that many American Jews know is that an attack like Pittsburgh was going to happen at some point. There’s enough hate and enough weapons available that it’s not uncommon to wonder what may happen each time you go into a temple.

To idly sit by while he has a platform to effect change is not Fine’s style. “We’re not going to let people who have very narrow minded, hate-filled, or ignorant views define who we are as a campus or define who were are as human beings,” he said.