‘I have no faith in your leadership.’ 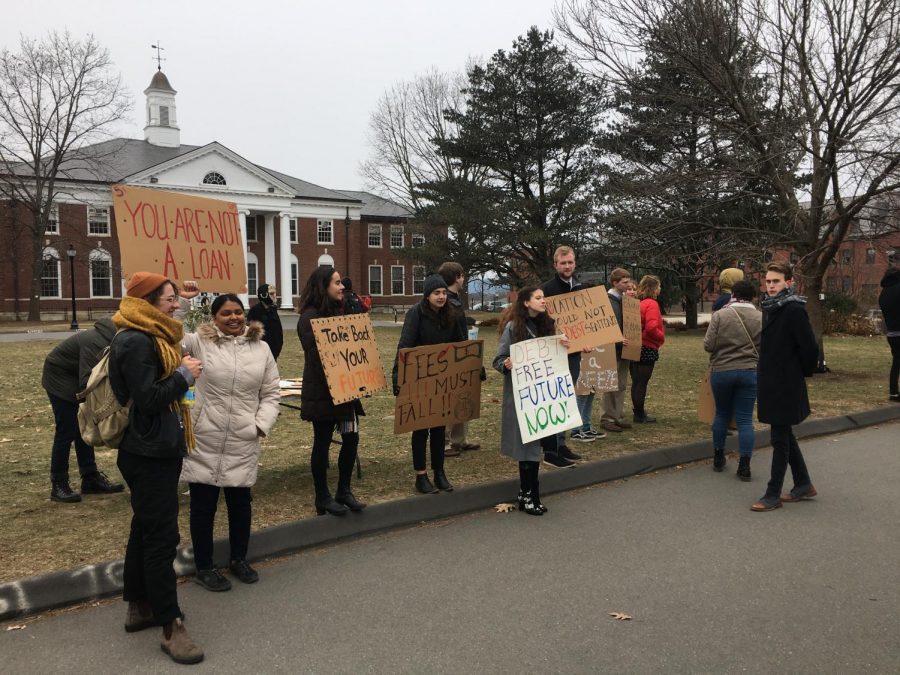 By Michael Connors and John Buday

Several student activists from the University of Massachusetts rallied outside the Old Chapel on a frigid Thursday morning, calling for the Board of Trustees to freeze increasing student tuition rates and fees for future academic years.

The event held by the Center for Education Policy and Advocacy began at 10 a.m. when students entered the Old Chapel to speak at the beginning of the Board of Trustees meeting.

Chairman of the Board of Trustees Robert Manning opened the meeting by noting that his own research had shed light on some of the previous issues higher education has faced.

“Enrollment is declining, discount is escalating quite substantially, graduation rates are falling, and there are many, many, many higher education institutions, both private and public, that are going to go out of business in this country in the next five years,” Manning said.

“We don’t have a student debt crisis in this country, what we have is a graduation crisis,” Manning added.

After UMass Amherst Student Trustee Jiya Nair and President of the UMass System Marty Meehan’s opening remarks, Erik Plowden, a freshman political science and social thought and political economy major, spoke to the trustees about the burden college debt has on students.

“You have a very unique platform, one which you can use to lobby our legislators alongside us in order to hold them responsible for the security of our finances,” Plowden said. “You can abdicate responsibility and allow student debts to mount higher and higher or you can make real efforts to [address] an already building crisis.”

During his speech, Plowden said students were willing to work with the board to come up with solutions for the debt crisis. Blythe White, another freshman STPEC major, then crossed a divider separating the audience and the trustees, to hand over an actual olive branch, a symbol of peace, to President Meehan.

After the rest of the public comments, Student Government Association President Timmy Sullivan rebuked Manning’s earlier comments with a spontaneous and fiery statement at the microphone.

The board did not recognize Sullivan as a speaker and instead, underneath a drowning chorus of applause from student activists in the audience, continued with their planned agenda.

The UMass chapter of Students for a Free Tibet also stood silently in the back of the room, holding signs asking the board to end the partnership between UMass Boston and the Confucius Institute, an exchange organization run by the Chinese government.

Students with CEPA then exited the meeting, moving to the Goodell Lawn to share testimonies of their own struggles with student debt. They dropped written statements of financial struggles into a box of olive branches which CEPA plans to deliver to incoming state legislators.

Chants such as “fees must fall” and “when we fight, we win,” were led by James Cordero, lead campaign and advocacy coordinator of CEPA.

“We want more public statements from Marty Meehan and members of the board about specific policies that the state could pass to make this a more affordable institution,” Cordero said in a separate interview.

Plowden, who was standing outside holding a sign which read “education is a human right,” said students were not only looking for a tuition freeze, but also an eventual decrease in tuition and debt cancellation altogether.

“People will ask about a magic money tree or whatever it is, asking where is it all going to come from,” Plowden said. “But it’s important to note that just initially, off the bat, our public education is underfunded in the state that it is right now. It’s not even that we’re asking for more. We’re asking for the bare minimum, and then to work from there.”

Cordero explained there was still much students could do to become involved in the campaign against decreasing student debt.

“Advocacy Day [is] on March 21, we would love to have members of the board or Marty Meehan himself come out with us and talk to legislature,” Cordero said. “Our voices are very powerful, absolutely I agree, but when legislators see our voices coordinating with administrative voices, it creates a more powerful and cohesive message, and we would love to have that partnership.”