Llamas, muses and aliens, oh my! 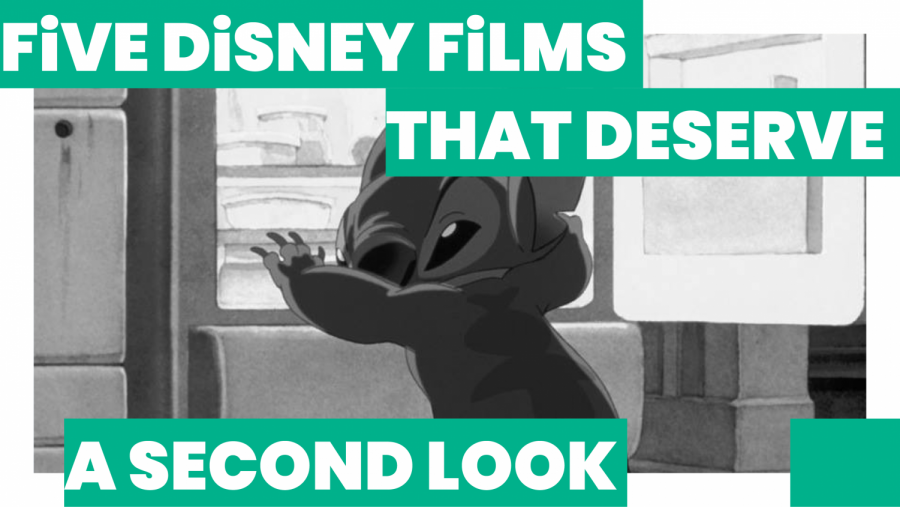 As we gear up for the new versions of “Mulan” and “Aladdin,” once again being brought to the big screen with a live-action touch, some people can’t help but long for the good old nostalgic days of Disney. While there are lots of movies to think about and reminisce over, it seems as though some really good movies are being left out of the conversation. While there isn’t time to discuss or watch every Disney movie ever, here are the top five underrated Disney movies and three reasons to watch them.

Kuzco is a very charismatic narrator to a story about his misfortune caused by, let’s face it, his own selfish personality. In the beginning he invites the audience to see how he got to be a llama all alone in the pouring rain, implying that it wasn’t his fault at all. He’s obviously not as clueless or useless as his intro implies, but he definitely has an issue with taking any sort of blame. Eventually, when the audience is brought back to the point at which they first met, he cuts off his own narration, because the audience no longer believes Kuzco to be a blameless victim.

It’s possible that Disney has never created a more narcissistic character than Kuzco….and yet you can’t help but love it. Seriously, he starts off as an entitled, pompous jerk who only invites Pacha to his palace so he can take over his land to build a water park . . . for himself. Despite this, his sarcastic, somewhat haughty attitude is interesting and entertaining to watch. Animal transformation stories like these are literal motifs for the transformation of one’s personality. After being a llama and only having Pacha to depend on to help him survive outside the palace, and therefore developing an actual relationship with someone for once, Kuzco becomes a more laid-back, selfless person. We love a transformative king.

A llama? He’s supposed to be dead! Yzma is one of the most iconic Disney villainesses out there, although she isn’t the only one with a gray-lavender skin tone and a black and purple color scheme (cough-cough, Ursula cough-cough). Sure, she’s actively trying to kill Kuzco the entire movie, but having a good outfit while doing so is something to applaud. She’s cruel, mean and calculated but she still makes time to put together fabulous outfits as she hunts down Kuzco. In the end, she’s turned into a cat, so it’s really hard to take her threats seriously.

Megara, or Meg, is an interesting “damsel in distress” for the time at which this movie is made. In fact, she’s never really in distress at all until the end of the movie, and makes it very clear that she can take care of herself. She doesn’t immediately fall for Hercules after he “rescues” her or after most of his heroic acts. Her snarky, sarcastic outlook on life is what makes her an interesting character to watch (if you can’t tell by now, this writer loves sarcasm). Her best line hands down from the movie is: “Well you know how men are. They think ‘no’ means ‘yes’ and ‘get lost’ means, ‘take me I’m yours.’”

Five fabulous black women narrating the story of one of the greatest Greek heroes of all time through song? Are you kidding? Of course, this is one of the biggest reasons to watch this movie and should be reason enough, but . . .

Love is the most powerful magic of all

In all honesty, “Hercules” does something that most people wouldn’t do for their Tinder matches: he puts his life on the line for Meg and, when rewarded with the power of the gods, gives up living in Olympus in order to be with Meg. Sure, he definitely could’ve compromised to be with Meg and continued to be a god (because let’s not pretend that Disney didn’t absolutely scrub Zeus’s playboy personality in order for this to be family-friendly) afterwards, but the point still stands that he made sacrifices in the end because he truly loved her. Cue the fake gagging and carry on for the other movies.

All of the adult jokes

This was probably one of the most inappropriate movies this writer has ever seen as a child. That scene with Chel and Tulio messing around was a bit too obvious, and as you get older you realize exactly what it is they were doing. There’s really no way around some of these jokes, and as a college kid they’re just what makes the movie all the more worth it to watch.

Being mistaken for two gods while having an argument at the same time a volcano is threatening to erupt is one thing, but to more or less keep it up throughout the whole movie is a whole other level. The only people who truly suspect them are Chel and Tzekel-Kan, the latter of which does everything in his power to prove Tulio and Miguel aren’t gods and probably get them executed. Even before ending up in El Dorado, Tulio and Miguel were nothing more than mere Spanish hustlers, and yet they somehow escaped execution and possible enslavement. Seriously, on the boat they are literally told they will end up on Spanish sugar plantations and will most likely die there. Dark . . . but still a fun movie!

The lush setting of El Dorado, a city filled to the brim with gold, is cinematically stunning. Not only that, but the colorful culture of the people is just as fun to watch as that of the Peruvian culture of “Emperor’s New Groove.” It speaks to pre-colonial Mayan culture in a way that tries to understand what that life was like before colonization.

An interesting plot point of “Lilo & Stitch” is that Lilo and Nani are under the threat of being separated by social services due to the fact that Nani is struggling to take care of Lilo since their parents died. Lilo struggles with a deep loneliness that she only knows how to express by acting out, and Nani struggles to control this behavior, especially when it threatens their situation even more. The appearance of Stitch helps Lilo to feel less lonely, and even though initially he definitely makes things worse, in the end he’s what helps bring their family together again.

“Ohana means family, and family means nobody gets left behind” is the powerful message repeated throughout the movie that causes the audience to understand why Lilo is so attached to Stitch, but also touched the hearts of, well, everyone. Everyone has family issues, and even if they aren’t as extreme as the threat of separation or the death of parents, anyone can relate to the deep bonds of family, and how that bond is something people should be able to depend on no matter what it is they go through. In Lilo’s case, it’s sticking by Stitch even though everyone else sees him as a destructive monster. She wanted him, and the rest is history.

Stitch is an extremely destructive ball of blue fluff that literally crashes into Lilo’s life in such a way that helps both of them grow as characters. His initial purpose in life is to destroy, but Lilo is the only being that shows him love and affection in such a way where he learns to reciprocate it. He uses his knack for destruction to save Lilo, and although he loves and genuinely cares for her, he realizes his presence is too chaotic for her life, and is willing to go to galactic prison to save her grief. But because this is a Disney movie, everyone else realizes that Lilo is good for Stitch and being “exiled” to Earth is better than a lonely experience on some asteroid.

Nobody can tell this writer they didn’t cry when Goob was getting passed over to be adopted, or when Lewis had the chance to find out who his mother was and didn’t take it. Even before this, Lewis is just a bright, young kid who tries over and over to be a successful inventor while also trying, and failing, to be adopted. You can’t help but feel for him, however in the end, he fixes the future, both for himself and Goob, so they both get the lives they deserve. *Fake single tear emerges*

Whenever sci-fi movies attempt to depict what the Earth would look like in the future, it’s usually to some grand scale of hoverboards, trains that loop through skyscrapers at sonic speeds and flying cars. If 2037 looks anything like it does in the movie, maybe the future isn’t going to be as bad as we all think it will be. “Meet the Robinsons” helps the audience, for at least a little while, imagine what the future would look like if we were making rapid technological advancements. It speaks to the usual childlike image of this more efficient, more fun world that lots of people create in their head.

Another fun movie about family

If “Lilo & Stitch” is about sticking by family no matter what, then “Meet the Robinsons” really speaks to the theme that you kind of make your family what it is. Lewis ends up marrying Franny, a girl obsessed with frogs, and has all these fun, quirky family members that he never would’ve had had he not been adopted. Even to this point, when given the chance to meet his mother, to show her the wonderful person he’s become so that maybe she’ll change her mind about leaving him, he gives that up. Being with his mother means he might not have his future family who truly loves him, so instead of looking back and trying to change the past, all he can do is look forward to the future because he knows in the end he’ll end up loved.

All of these movies are available now on either Netflix or Hulu.

Darianna Young can be reached at [email protected]