UMass looks to limit turnovers ahead of BU clash 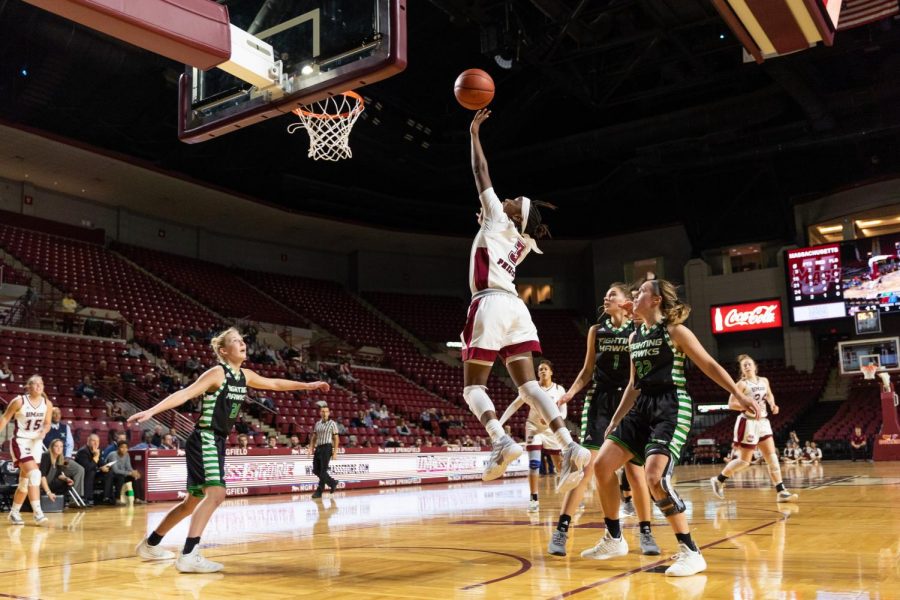 The Minutewomen (6-4) played well in the first half of their game against Incarnate Word but sloppy play in the second half allowed the Cardinals back into the game.

Not turning the ball over like it did against Incarnate Word will be key to UMass’ chances at coming away with a victory against the visiting Terriers (4-3).

“We’re turning the ball over at a high rate, more than I’d like to,” coach Tory Verdi said. “But our goal is to come in and play and compete for 40 minutes and be the hardest working team out there.”

Against Incarnate Word, the Minutewomen turned the ball over 21 times, allowing 20 of the Cardinals’ 59 points to come off turnovers.

“We were really careless with the ball,” sophomore guard Paige McCormick said. “So, we just really got to focus on taking care of that and we’ll be fine.”

Another issue UMass hopes to avoid on Wednesday is failing to stay focused for the entirety of the game. A lack of focus and consistency last time out for the Minutewomen is something the team can learn from against a stronger Boston University side.

“I really liked how we came out in the first half [against Incarnate Word], I thought we did a really good job at executing offensively. We were pretty meticulous, and I was extremely happy with that,” Verdi said. “I was not happy, especially with the last eight minutes of the fourth period where, I just felt a lack of focus or perhaps we thought the game was over.”

That sentiment was shared by Verdi’s players who also felt that the team’s focus, especially down the stretch lacked.

“We just got to keep our focus. I think that’s the main thing,” McCormick said. “We can’t worry about what the scoreboard says and just keep our focus, keep our energy up. The intensity has got to stay high and as long as we do those things, we should be good.”

The solution Verdi offered for the lack of focus? Everyone being on the same page.

“Regardless of who is game, especially when we sub, our bench players need to come in with great focus and understand what we’re trying to get done,” Verdi said. “Everyone just needs to be on the same page. We got a lot of moving parts because of injuries and then all of a sudden we get some players healthy who now enter the lineup, so those guys need to understand what we’re trying to do on both sides of the ball.”

Senior Hailey Leidel echoed her coach’s message, saying, “Everyone needs to be aware that it’s a 40-minute game and even if we go into the locker room and we’re up at halftime, that doesn’t mean you can let up.”

Though a matchup against Boston University offers the Minutewomen chance to play at home against another Massachusetts-based squad, they insist they’re preparing for it just as they would any other game.

“It’s never just another game.” Leidel said. “Every game is big to us, so it’s another big game.”

Verdi shared the feelings of his junior captain, stressing that his team would not approach the game any differently.

“For us, it’s just the next game on our schedule,” Verdi said, “and we’ve always prepared that way, regardless of our opponent. We want to play well in front of our fan base and limit our turnovers.”

Tip-off Wednesday at the Mullins Center is set for 7 p.m.