Minutewomen outscored Terriers 20-7 in the third 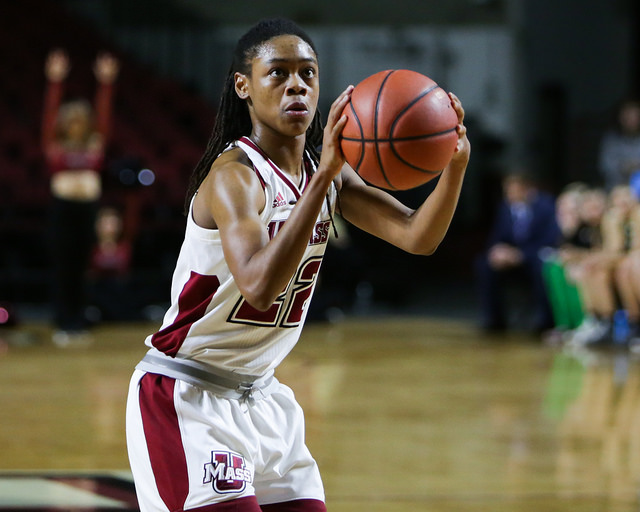 The Massachusetts women’s basketball team got the better of in-state foe Boston University with a 66-55 win Wednesday night.

“We came out in the third period and we took over,” coach Tory Verdi said. “They only scored seven points that quarter.”

The Minutewomen shot the ball well in the third, making eight of their 14 shots to stake UMass to a 56-37 advantage heading into the fourth quarter.

Early in the game, the Minutewomen’s main source of offense came courtesy of Jessica George. George scored 14 of her career-high 18 points in the first quarter.

“Jessica George did an unbelievable job for us knocking down shots,” Verdi said.

George opened the game shooting 4 for 4 on 3-point attempts, opening an early 20-13 first-quarter lead for the Minutewomen.

“I stayed motivated, stayed focused,” George said of her offensive success. “I shot the ball really well in practice, so I think that just led into the game tonight. I guess I was just hot.”

Not to be outdone by her fellow captain, junior Hailey Leidel led UMass in scoring with 21 points. On top of her scoring output, Leidel also contributed four assists and three steals.

Leidel’s 21 points came mostly on the back of a hot shooting stretch in the second half, going 5-9 from the field and 4-8 from three-point range.

The Minutewomen defense caused problems for the visiting Terriers, forcing 19 turnovers and turning those turnovers into 22 points. Knowing that Boston University was prone to turning over the ball, UMass added some full-court press to their usual 2-3 zone defense.

“We want to give our opponent some different looks, we don’t want our opponent to get comfortable,” Verdi said. “It was good early in the first period. I would have liked to throw a little bit more at them in the second half, but we were in foul trouble.”

Strong 3-point shooting helped propel the Minutewomen past the Terriers, as they shot 34.6 percent from beyond the arc. Leidel and George led the way for UMass from deep as the pair went a combined 9-20 from outside.

“We got a couple [three-pointers] in transition,” Leidel said. “When they go zone, we knew their zone was not really aggressive, so we knew that if we filled in the right spots, which coach Verdi communicated to us, we knew we would get open looks.”

After heading into the final quarter up 19 points, the Minutewomen allowed Boston University to get back into the game. The Terriers closed the game on a 10-2 run.

“We’re searching for 40 minutes of basketball here,” Verdi said. “At times we were really good, but we have to make sure that we’re a little bit more consistent down the stretch.”

Boston University rode its starting five throughout, as the group played all but 20 minutes of the contest and the bench failed to score a single point.

Terrier guard Lauren Spearman repeatedly burned the Minutewomen from deep, hitting on four of her five attempts from beyond the three-point line.

Bre Hampton-Bey, UMass’ second-leading scorer, struggled to find a rhythm offensively after finding herself in foul trouble early in the second quarter. The sophomore guard tallied just six points and two assists on the night.

The Minutewomen will take the court next on Sunday on the road against Siena with a chance to win their third straight game. Tip-off is set for 2 p.m.