Walker: Minutemen finally have the skill-level and talent to execute Carvel’s game plan

With a couple of appearances on SportsCenter already this season, UMass is showing time and time again why it’s a fun team to watch 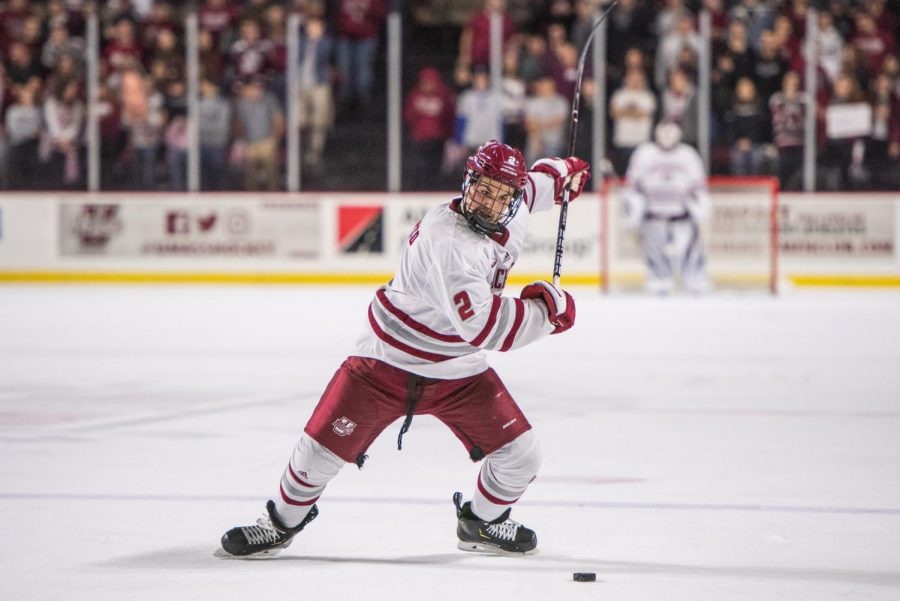 Jack Arena, the men’s ice hockey coach at Amherst College since 1983, often comes to watch the Massachusetts hockey team practice as he works to improve his own Division III program.

About a month ago, Arena came up to coach Greg Carvel following a normal practice.

“You guys are skilled,” Arena stated.

“You think so?” Carvel responded.

A couple weeks later, Carvel began to see it, too.

“I was watching practice like, ‘Jeez, we’re pretty damn skilled, we have a pretty good team,’” Carvel said after practice on Tuesday. “I am more and more appreciating the team. They’re a good group of kids, I say this all the time, they’re so consistent.”

Despite having the highest winning percentage in all of NCAA Division I hockey, standing at a perfect 7-0-0 in Hockey East play and earning a No. 1 national ranking, it’s not just the success that’s fixating a spotlight on the Minutemen.

This team is fun to watch.

As a senior at UMass, I’ve been attending hockey games since my freshman year when John Micheletto was still head coach. “Fans,” if you could call them that, wouldn’t make it past the first period before getting bored and heading for the exit signs.

When the team did score, it was most likely credited to a lucky bounce or the fact that four players had their stick on the puck and managed to force it through.

Goals didn’t come easy, but they did come sloppy.

Whether that was a result of the culture surrounding the program at the time or the actual players that made up the team, it is not the case with this 2018-19 squad.

Brett Boeing, who joined the team after Christmas break of the 2016-17 season, described the difference between the team he joined then compared to now as “night and day.” And in my opinion, that’s an understatement.

“They bring the same thing every night and to me that’s a great sign,” Carvel said of the Minutemen’s compete level. “They play hard, they play right. Our kids don’t dive, they don’t do all that gamesmanship stuff, they just got out and compete and play hard.

“And we have good hockey players too.”

For the sake of timeliness let’s focus on the UConn game. Seven goals counted as the most the Minutemen have scored since the 2014-15 season when they blew past American International 7-1 to end a three-game losing streak.

Besides Marc Del Gaizo’s SportsCenter top-five goal and Niko Hildenbrand’s empty netter at the end, the other five weren’t half-bad either. Jacob Pritchard’s third period tally that gave the Minutemen a 5-3 lead was a perfect example of elite instinct and skill.

Most players from that 2015-16 team would’ve made the cut to the crease, gotten John Leonard’s sharp pass and – instead of holding onto it for the extra second and bringing the puck to the other side like the St. Lawrence transfer executed – wouldn’t have been able to have slowed his momentum and probably would’ve skated past the net.

Marc Del Gaizo’s picture-perfect goal against the Huskies was at least the second time that UMass appeared on SportsCenter this season and Amherst hasn’t even had a real snowfall yet. When you think about how many Division I hockey games are played in a week, to emerge out of all of those with one of the most technical and visually pleasing goals is nothing short of impressive.

“Since I’ve been here, [in] my first year, Steven Iacobellis was on SportsCenter Top-10 and last year, we had Cale [Makar] and [Leonard], and this year we’ve had a couple,” Carvel said. “When those things happen it’s pretty special, those have to be really nice goals.

“Those are things that you don’t coach, you don’t teach, you just appreciate,” he added.

Sitting at the top of the Mullins Center last Friday night, it occurred to me that the UMass student body may have officially bought into this team. Over 7,100 fans came out to the Mullins Center, a record attendance since 2012, before the Minutemen were even announced as No. 1 in the nation.

On the outside it may seem like the statistics and on-paper credentials are what is selling tickets and getting students to come to the Mullins Center on their Friday and Saturday nights, but it’s not. Those things definitely help, but the new-found talent and elite skill coming from this UMass team is what makes it for real.

“We can’t let [the ranking] be a distraction in any way,” Carvel said, “I honestly won’t enjoy it unless we beat a very good Quinnipiac team twice this weekend.

“If we’re No. 1 for a day, or less than a week, maybe we don’t deserve it. We’ll be tested fully by Quinnipiac,” Carvel said.