Walker: Sizing up the second half of UMass hockey’s 2018-19 season 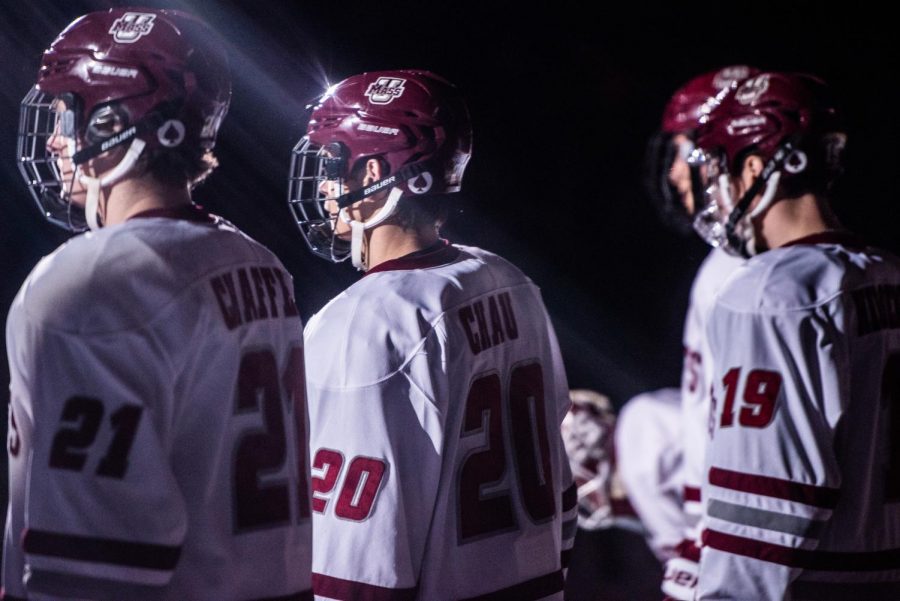 So rankings in the first half of the season don’t mean anything, right?

But from October to mid-December the No. 2 Massachusetts hockey team did something right and whatever it was, people are starting to pay attention. So much so that, to me, it’s worth mentioning.

It’s undeniable that there is still so much more hockey to be played in the 2018-19 season, and it’s fair for critics to claim that what has occurred in Amherst this year will be subdued if the compete-level starting in January diminishes in any way.

I decided to look ahead and size-up the Minutemen’s second half of the season as well as map out where I think they stand with their future competition.

UMass welcomes No. 11 Northeastern three weeks into January for what I believe will be the marquee matchup of the second half. Right behind the Minutemen in the Hockey East standings with their sole loss and tie coming at the hands of Boston University, the Huskies have been a force in the conference.

Northeastern edges out UMass for the fourth-ranked scoring offense in the NCAA, averaging 4.00 goals per game. And as for the defensive side, 2017 NHL Draft pick Cayden Primeau sits in a four-way tie for the seventh-best winning percentage in Division I hockey (.750). He’s started every game this season.

Defeating the same team twice is difficult, but three times is a different story. The Minutemen venture back to Rhode Island on Feb. 23 to face Providence after nearly escaping the last two contests with one-goal wins. The No. 10 ranked Friars will not accept a loss for a third time.

Providence slots in right behind UMass with the sixth-ranked scoring margin (1.69) while also sporting a tie with powerhouse Minnesota Duluth for the No. 5 scoring defense in the country (1.88). Matt Murray posted just under 30 saves each night and back-to-back late third period goals to anchor the Minutemen in overcoming Providence earlier this season.

Don’t nod them off

UMass faces Vermont for the first time since advancing from the opening round of the Hockey East Tournament after a 3-1 series win over the Catamounts last season. Even though it currently sits in dead last of the Hockey East standings, Vermont gave UMass a tough time last year.

Yes, the Minutemen took last year’s season series 3-1-1, but the scores don’t indicate how hard the Catamounts played each game. This season, approximately 31 percent of UMass’ goals have come on the power play and Vermont currently has the fourth-ranked penalty kill percentage in college hockey (.894).

It’s no secret that BU and Boston College haven’t had the seasons its legacies live up to thus far, but to not take advantage of the two notorious powerhouses that are struggling would be frustrating.

The Terriers are allowing an average of over three goals per game (3.07) so far this season, which doesn’t look great but doesn’t mean goals will come easily. For BC, the Minutemen better be ready for David Cotton. The 2015 NHL Draft pick leads the NCAA in goals per game (.79).

UConn forced UMass to trail after the first period for one of the only times all season, and it will have two more opportunities to finish what it almost ignited on Nov. 30. The Huskies travel back to the Mullins Center on Feb. 21 before the Minutemen round out the regular season in Hartford on March 8.

Four goals from UConn counted as the most scored against UMass all season, even though the Minutemen’s seven goals were also the most they’ve tallied all season, as well. But I can confidently say that UMass cannot sleep on UConn.

UMass Lowell is first on the second-half season calendar – the first home game of 2019. It wouldn’t be surprising if the Minutemen needed a period or so to get their legs back under them after this three-week break. But taking too long to get re-acclimated could be detrimental to starting the year on the right foot.

If UMass can put itself on the power play, then it might be able to cash in enough to make up for having to work out kinks and getting back into game shape, should that disadvantage arise. The River Hawks have a fairly low penalty kill percentage and are allowing an average of 2.44 goals per game.

Coming out of the break strong will really set the tone for the Minutemen’s rest of the year. Securing the first two games will dictate whether or not UMass has momentum coming into its first series of the second semester.

UMass travels to American International College the next day after facing the River Hawks to matchup with a solid .500 team right now. Locking down those two games is something most are expecting the Minutemen to accomplish, but also an opportunity that critics see for them to falter.

The weekend against Maine, just one week after a home-and-home series with Northeastern, will be tough. The set with Northeastern will take a toll regardless of who comes out in the win column. Remaining healthy and strong after such a series will be a test, especially on the road.

The Black Bears haven’t put together a flashy season, despite splitting with UMass Lowell and BU in those series as well as a one-goal loss to No. 4 Minnesota Duluth. But Maine will be welcoming a bruised UMass, a major opportunity.

The regular season winds down with a rematch at Merrimack on Feb. 28. The Minutemen lit up the scoresheet with a combined nine goals against the Warriors in the early season series but cut it a little close while in North Andover coming from behind in the third period.

If the Lawler Rink atmosphere is what keeps Merrimack in the game, then UMass better be ready to do some tuning out.

The third and final contest with Maine is scheduled for the Saturday after the Thursday contest with Merrimack. It’s currently scheduled to be Senior Night, which could serve as some added incentive to secure a win. Also considering playoff predictions will be in full swing at this time.

Given the fact that UMass has convincingly dominated Hockey East in the first half, I only see daunting competition in Northeastern and Providence. Given the curbed success in Boston, the Minutemen have an opportunity to be the best hockey team in Massachusetts – an opportunity that hasn’t come around often.

But it all comes down UMass’ ability to maintain its momentum and consistent level of play.

I know there are a lot of people ready to watch the Minutemen go back to old habits, but there are also those who think this is only the beginning.