An ensemble of electrifying performances recreate the magic of Queen 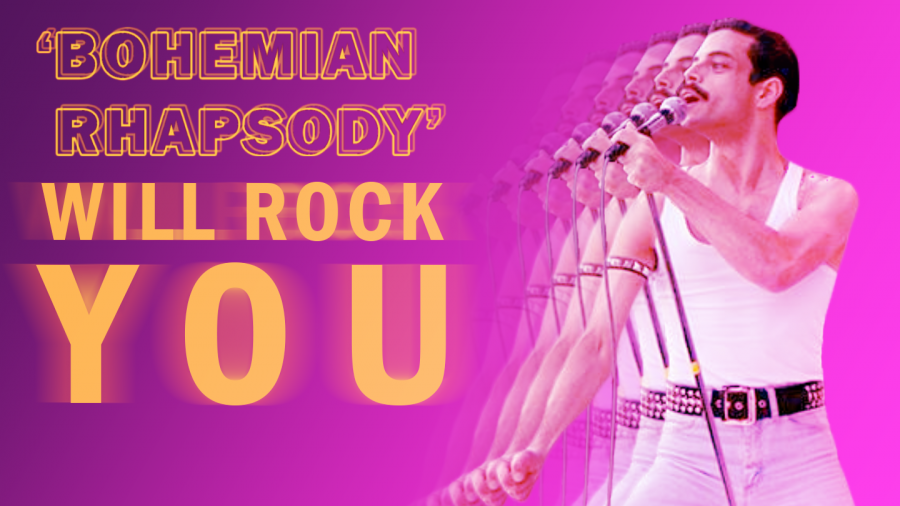 When most people think Queen, epic rock ‘n’ roll comes to mind. That is exactly what Bohemian Rhapsody offers to its audiences. It is an electrifying biopic of the rock royalty group, mainly following the band’s lead singer, Freddie Mercury (Rami Malek). It takes the audience through Queen’s rise to success, and how Mercury battles to find fulfillment and love in the lonely life of a rock star. The film addresses the adversity Mercury faced from always feeling like a “misfit” in the world, including the racism involved with being an Indian from Zanzibar living in London, and his struggle to come to terms with his sexuality. In an intimate scene in the film between Mercury and his ex-lover, Mary Austin (Lucy Boynton), he reveals that he only truly feels himself when he is with her and when is performing on stage in front of thousands of people.

Though the film focuses on Mercury’s story, it also emphasizes the importance of the band’s comradeship in creating the legendary hits we all know and love. The actors beautifully exhibit the chemistry the band had and how their bond made Queen truly special. It disputes the commonly believed myth that Mercury wrote all Queen’s hits, and it shows how each member of the band, Freddie Mercury, Brian May (Gwilym Lee), Roger Taylor (Ben Hardy) and John Deacon (Joseph Mazzello) contributed to their musical genius. Working alongside Brian May and Roger Taylor as consultants on the film, they were able to accurately portray which band members wrote which songs.

Though initially the film did not seem likely to be a frontrunner for awards, it has nonetheless gone on to win Best Drama Motion Picture Best Actor in a Drama Motion Picture for Malek at the Golden Globes. It has even received Academy Award nominations for Best Picture and Best Actor for Malek’s portrayal of the rock legend. Many people were against the film even prior to its release because the original director Bryan Singer was accused of sexual assault part way through the filming process and was replaced by Dexter Fletcher. This definitely put a damper on the film’s success before the film was even complete. In addition to the controversy over the director, many of the well-known critics (from the New York Times, Variety etc.) were underwhelmed by the film and gave it poor reviews. However, despite these setbacks, people still went out to see the film and it earned a total of 122.5 million internationally on its opening weekend.

If you are looking for a film that exposes or explores the more problematic aspects of Mercury’s life — such as his promiscuity and his long decline to his premature death, after his legendary appearance at Live Aid, where the film ends — you will be disappointed. Bohemian Rhapsody is clearly not intended to be a fact-based documentary of Mercury’s life; it is a thrilling rock ‘n’ roll experience. Some reviewers have criticized the film for skipping from “aha” moment to “aha” moment and not going into much depth on any given moment. But, in this style, the film manages to convey the exhilarating electricity of Queen, as they created, and re-created, their very own unique sound (combining, for instance, rock and classic opera in the song that gives the film its title). Malek captures the charisma of Mercury when he was at his absolute best, on stage and in his element. As he says at one point, “when I go out there, I know I am doing what I was born to do.”

The performance sequences are the most enjoyable parts of the film; the actors’ commitment to their rock ‘n’ roll personas lights up the whole screen with classic glam-rock. Along with the stunning set and fabulous costume designs, the film really captures the essence of Queen’s aesthetic. The whole cast had stellar performances, however Malek really stands out in his role. With the iconic Mercury teeth and the outrageous, flashy costumes designed by Julian Day, he undergoes a complete transformation into the glam rock star.

As previously mentioned, the film worked directly with Brian May and Roger Taylor, who ensured that the story of Queen and Mercury was done justice. Some suspect that the darker moments of Mercury’s life were tampered down because of May and Taylor’s involvement. Based on what the public knows of Mercury’s private life, the narrative could have been more unruly. However, it is likely the two band members wanted to make sure Mercury was honored in this film rather than brought to shame. They wanted to showcase his genius and how the band’s music influenced the world.

Though the film is centered around the power of the music, it is not completely devoid of showing the more difficult parts of Mercury’s life. It acknowledges his longing for love as he deals with accepting his sexuality and battling to find meaningful relationships and it alludes to his promiscuity and drug use during his time in Munich. However, the film does not dwell on these darker moments in Mercury’s life, rather it shows how he overcomes them and finds love and a sense of belonging in others.

The most endearing and well-developed relationship in the film is between Freddie and his lifelong best friend, Mary Austin. She was the inspiration for Mercury’s song “Love of my Life,” and even after he came out as bisexual, she continued to be his closest companion. Boynton and Malek’s on-screen chemistry tastefully portrays the bond between these two individuals and how they maintained a genuine love for each other throughout their lives.

The film culminates with a recreation of “the greatest live rock performance of all time:” Queen’s performance at the Live Aid concert in London 1985. The actors’ playing the band members capture the essence of rock ‘n’ roll in this performance. Mercury was known to have never had any formal dance training and he just moved however he wanted to. Malek channeled Mercury when filming the Live Aid sequence. He did not have choreographed moves and he let his body control his movements. Malek’s spirit in the Live Aid recreation is electrifying and his performance is uncannily evocative of Mercury.

Bohemian Rhapsody is a two-hour film devoted to the story, albeit a partial and airbrushed one, of one of the most legendary musical groups of all time. Viewers who accept the movie on its own terms are likely to leave feeling uplifted. What makes the film, however, is Rami Malek’s shockingly accurate and energized performance as Mercury. At times, it is difficult to distinguish images of the real Mercury from the actor.