Comeback attempt cut short in No. 2 UMass’ 4-3 loss to Maine 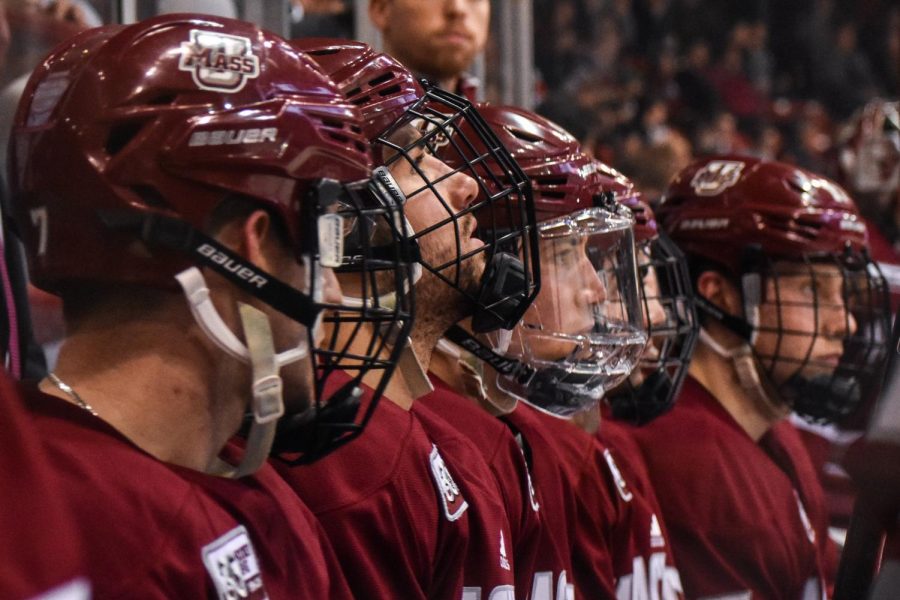 A furious third-period rally wasn’t enough for the Massachusetts hockey team Saturday night in a 4-3 loss to Maine at Alfond Arena.

“I thought we were awesome in the third period,” coach Greg Carvel said. “It was a wild, wild, west game out there. Some games are bad wins, but I consider this a good loss.”

Jeremy Swayman was stellar in net for Maine after a shaky performance Friday night, as the sophomore stopped 53 of UMass’ 56 shots, including a penalty-shot opportunity from John Leonard in the second period.

“They make it difficult to take away his eyes,” Carvel said. “They’re a big, strong team.”

The Minutemen’s 56 shots were the most in a game since UMass’ 4-3 five-overtime win against Notre Dame in the 2015 Hockey East playoffs.

The Black Bears netted three power play goals in the second period, two coming after they were awarded a five-minute major man advantage on a contact-to-the-head penalty from Jake Gaudet, giving Maine its three-goal cushion that ultimately proved too steep for the Minutemen to overcome.

“Two of their goals were shots from the point that were screened, which is an area we aren’t great at [defending],” Carvel said. “They did a nice job getting bodies to the front.”

A little under halfway through the first period, Maine scored the game’s first goal following a clean faceoff win from the Black Bears in the offensive zone. Emil Westerlund tucked a shot past Murray, putting the home team up 1-0 at 7:31.

UMass tied the game on a Leonard snap shot in the high slot after a good look from Pritchard at 16:03.

Leonard received a penalty shot in the second period, but Swayman stoned him, setting the tone for a Black Bears onslaught in the middle frame.

Alexis Binner and Eduards Tralmaks tallied the two goals on the major penalty by Gaudet before Brady Keeper rounded off the trifecta on an Oliver Chau penalty later in the period, putting Maine up 4-1.

The Minutemen were unsuccessful on three previous power play chances until Pritchard scored on the man advantage in the third period. The graduate transfer’s second goal in as many games cut the deficit to 4-2.

Less than two minutes later, Chaffee followed Pritchard’s lead with a goal of his own, bringing UMass right back into it at 4-3. The marker counted as a shorthanded strike and upped Chaffee’s goal total to 15.

Maine was hanging on for dear life from then on as the Minutemen were all around the offensive zone, putting shot after shot on Swayman.

Pritchard had the best chance to tie it after swiping the loose puck through a Black Bear defender, granting him open ice from the hashmarks in, but Swayman shut the door.

Pritchard and Chaffee each finished with multi-point nights (goal and assist) while Cale Makar contributed a team-high nine shots on goal in the loss.