Greasy goals will No. 1 UMass past No. 8 Northeastern

All six goals scored on rebounds and net-front jams 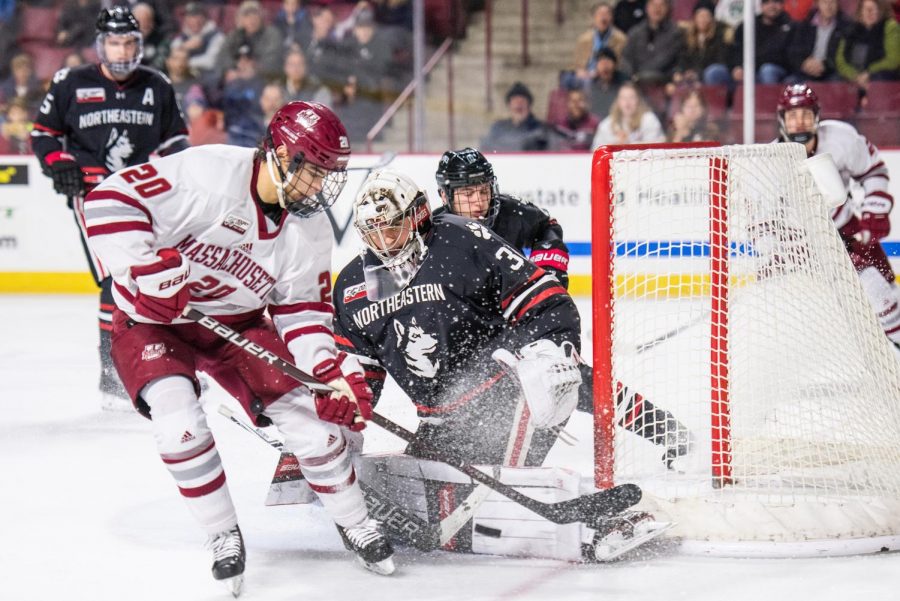 When the Massachusetts hockey team opened the second half of its season with sub-par showings on Jan. 4-5, No. 1 UMass coach Greg Carvel emphasized the group’s need to ‘start adding the ugly goals’.

Spurred by a trio of hard-nosed, first-period goals, UMass put a stranglehold on No. 8 Northeastern out of the gate and never looked back en route to a 6-1 win and two critical points in Hockey East standings.

“I thought that was as well as we’ve played all year,” Carvel said after the Minutemen improved to 5-2 in top-10 affairs. “We made the game extremely difficult with our positioning and I thought we dominated the game. Outside of [getting a little unraveled at the end there], we executed our game plan very well.”

Just as it did for the UVM series, UMass took the ice with a concerted effort to find greasy goals; and Mario Ferraro gave the Minutemen the jump they were looking for just 90 seconds into the first period.

After the defenseman entered the offensive zone and unleashed a shot on Cayden Primeau (17 saves), Kurt Keats, using his 5-foot-8 frame, found positioning and tipped home Ferraro’s shot to make it 1-0.

Energized by a lead under two minutes into the big-time showdown, UMass continued skating hard and earned another gritty goal. This time, graduate transfer Jacob Pritchard found himself in the dirty area.

Holding the puck behind the Northeastern net, Pritchard tried to deke his way past Primeau with a wraparound attempt, but the netminder denied it. On Pritchard’s second effort, he slammed it home.

“We made it tough for [Primeau] on the first two,” Carvel said of taking away his eyes. “To do that early, because we’ve had games where we’ve played well and we’ve made it a little too easy for the goalie to keep his team in the game, but tonight it was a lot different. Those two goals set the tone.”

Four minutes after Pritchard doubled the advantage just under ten minutes into the action, the Minutemen found yet another greasy goal. This time, Brett Boeing was the benefactor of hard work.

After Cale Makar connected with Boeing on a precise pass up the seam, the senior took the puck in stride and unleashed a backhander on Primeau. Just like Pritchard’s goal, he stuck with it and scored.

“We just came out with a lot of energy and we knew it was going to be a tough, skilled game,” Makar said after the dominant victory. “We knew that we wanted to outwork them and play to our strengths in just being hard in the offensive end and especially the defensive zone, and I think we did that very well.”

Oliver Chau, Bobby Trivigno, and Philip Lagunov also scored goals in the dirty areas throughout the rest of the game, but in the aftermath of an explosive first period, Carvel found what he’s been looking for.

“We played very disciplined and we scored a lot of goals around the net, which is a great sign for me,” he said. “I think all six goals were rebounds or pucks banging around the net. At the beginning of the year that wasn’t necessarily a part of our game, but in a game that I think a lot of people were focusing on us to see what we would do, we were extremely good.”