Graduate transfer from St. Lawrence is No. 5 among Division I scorers 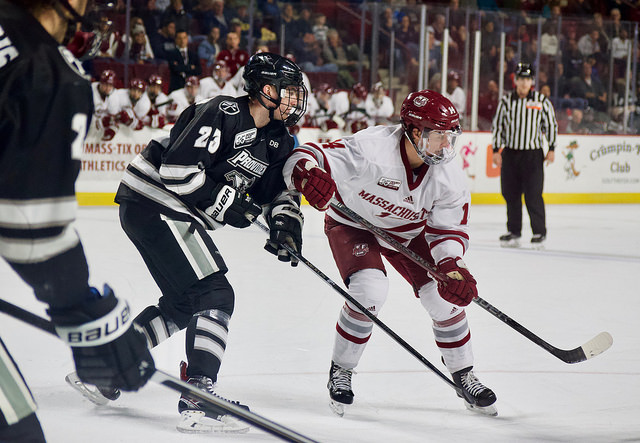 As it geared up for the 2018-19 regular season, the Massachusetts hockey team found a secret weapon.

Lost in the mix of another high-profile freshman class, No. 2 UMass quietly went out and acquired the skillset of graduate transfer Jacob Pritchard, from St. Lawrence, to bolster its already-promising lineup.

Although the forward didn’t completely fly under the radar entering the new season, expectations for Pritchard as a late-summer acquisition weren’t very high. In the shadows, however, Minutemen (19-5-0, 11-3-0 Hockey East Association) coach Greg Carvel knew the type of player he was about to introduce.

“I was right,” Carvel said with a laugh, recalling the decision to bring in one of his former players to the program. “He’s a really gifted offensive player and he’s been such a huge addition. He’s scored big goals, he’s made big plays — just a huge asset. I think the coaching staff had an idea of how good he could be, but obviously, on the outside, you wouldn’t have guessed that we’d be able to add someone like that.”

Through 24 games, the Macomb, Michigan native, who has yet to miss an outing, has recorded 31 points on 12 goals and 19 assists, becoming a force to be reckoned with on UMass’ second line in the process.

Spurred by his explosiveness with the puck, Pritchard sits fifth among all Division I scorers. He’s registered a trio of game-winning goals and 10 multi-point outings in four months as a Minuteman.

“There’s a lot of graduate transfers, but there aren’t many of them that have this big of an effect on a team,” Carvel said. “It’s a credit to Jake. I thought he got off to a bit of a slow start, he was learning how to play our style and get comfortable with it, but once he did that — he’s been just very consistent.”

Although a top-five scorer at the highest collegiate level, Pritchard credited his teammates for the success.

“I think it shows a lot for the team if you have guys that are doing well statistically,” Pritchard said after practice Tuesday. “It shows that you have a good culture, you have a good team and that everyone’s doing the right thing to get those guys the opportunities to put up points.”

Paired with John Leonard and Philip Lagunov on the second line, Pritchard has helped the duo bolster the foundation they built during last season’s record turnaround, adding a veteran voice along the way.

“I like playing with those guys a lot,” he said. “They’re both really intelligent, really smart hockey players. They’re able to get the puck in skilled positions and they make a lot of skill plays that most players can’t make.”

Aside from his production on even strength, the transfer really gets to work on the UMass power play.

Alongside Leonard, Mitchell Chaffee, Cale Makar and Marc Del Gaizo on the Minutemen’s primary man-advantage unit, Pritchard has recorded 19 of his 31 points on a league-leading seven power-play goals.

“I play with really good players on that power play,” he said, once again crediting his career-high numbers to the players around him. “I’m the guy that’s closest to the net so maybe I get a little bit luckier to get some more points, but it all starts with them to score goals. I’d say I’m just fortunate.”

Carvel was a bit more direct when explaining what makes the forward a power-play menace.

“He has the poise to make plays,” the third-year coach said. “His stick stills and his offensive mind are very elite for this level. He’s got great speed too, but I think the biggest thing is that he has the poise to get the puck on the goal line. He just settles down our power play when he gets the puck on his stick.”

After winning just eight games with St. Lawrence before reuniting with Carvel at UMass, Pritchard is playing in a different world. Unfortunately for the Minutemen, their secret weapon is no longer secret.