UMass remains winless in A-10 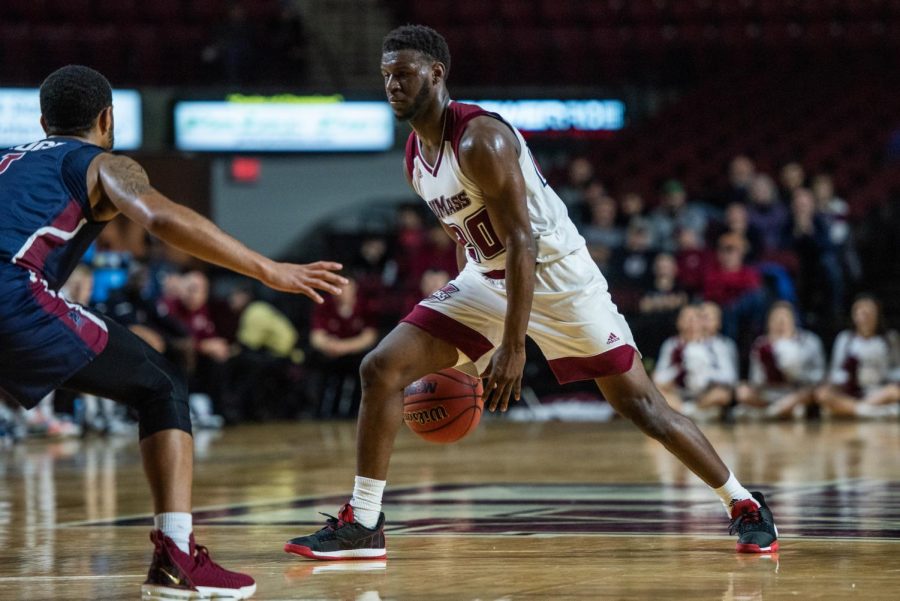 For the second time in as many games, the Massachusetts men’s basketball entered as heavy road underdogs, kept it tight late, but couldn’t quite get over the line.

“We’ve got to find a way to get to the free throw line more, 21 to four is a huge discrepancy,” said UMass coach Matt McCall. “Give them a lot of credit — we outrebounded them, I thought we guarded them really well in the second half, just didn’t get the stop we needed right there when the game was tied.”

After falling into an early 8-0 hole, the Minutemen clawed their way back into the game and trailed just 38-33 at the half despite 14 first-half points from Josh Cunningham and another 11 points from Davis, who shot a scorching 6-of-8 from 3-point range on the day.

Keon Clergeot — held without a point in the first half — put a big spark into the Minutemen out of the break, scoring UMass’ first 10 points of the second half and quickly bringing the visitors back within two.

Clergeot was excellent on Sunday, not only with his early second-half outburst but with his defense and hustle plays on both ends.

“I thought [Clergeot] was great,” McCall said. “Keon, the one thing about him is that he always brings terrific energy no matter what, and I’m really proud of the effort that he gave there. That’s why he’s in the starting lineup — he’s about the right things and wants to play and compete at a high, high level, and he’s going to continue to grow and be a big part of this program going forward.”

After struggling from the field in the first half, Carl Pierre drilled three triples in just over five minutes to keep UMass in it midway through the second half as the 3-pointers finally started to fall — the Minutemen were 7-of-13 from 3-point land in the second half, after started the game 3-of-12.

The Flyers, however, continued to hit shot after shot from behind the arc, as a team that had hit threes at a 31.8 percent clip on the season buried them at a 57.9 percent rate on Sunday.

UMass buckled down defensively late, and tied the game multiple times in the final few minutes. Luwane Pipkins, en route to an excellent 19-point, eight-rebound, seven-assist performance, jumped a pass for an easy fast-break layup to tie the score at 65-65 with 3:07 to play.

Two minutes later, Rashaan Holloway caught an inbounds pass, bowled over Dayton’s Ryan Mikesell, and laid it in to tie things again at 67-67 — Holloway was extremely efficient on Sunday, finishing with 10 points on 5-of-5 from the floor.

While the Flyers were stifled from the floor late — UMass held them without a field goal for over eight minutes late in the second half — they kept getting to the line and kept hitting their free throws, before Crutcher hit the eventual dagger with a minute to play. The Minutemen had been going over screens to defend the perimeter all afternoon, but the one time Clergeot got stuck underneath, Crutcher took advantage.

“Got to give them credit,” McCall said. “Keon went under on one pick-and-roll and Jalen Crutcher, great player, buried a three right in our grill, and you’ve got to give them a lot of credit.”

UMass still had chances late, but the final offensive possessions came up empty.

“I mean we shot four free throws to their 21, that’s a huge discrepancy right there,” McCall said. “I’ll have to watch the tape and see why we weren’t getting fouled or getting to the free throw line, but again another game that came down to the wire, and gave ourselves some chances and some opportunities there.”

Down three with 42 seconds left, Samba Diallo went hard to the rim and pushed his layup well long, not quite the opportunity or the ballhandler McCall would’ve liked with the game in the balance.

“Did a really, really poor job of executing down the stretch,” McCall said. “Called a play there, was trying to get Samba to throw it ahead and get a slip and drive the slip, but we never really got to that.”

Pipkins had a decent look late, but missed a deep three to seal a tough loss after a great effort on the road.

Now 0-3 in conference play, the Minutemen will look for their first conference win when George Mason visits Amherst on Wednesday.