No. 1 UMass goes right to work against No. 8 Northeastern 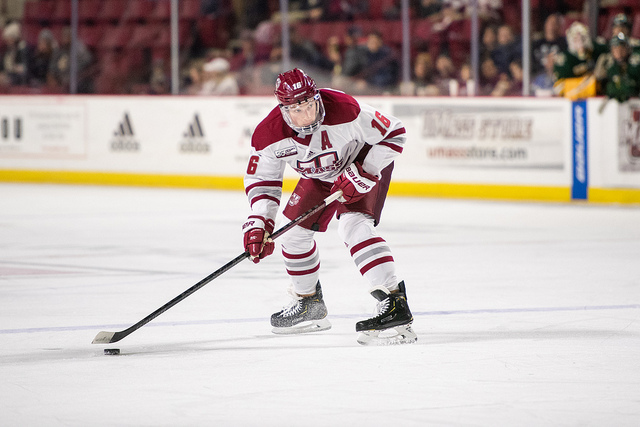 All good things come in pairs.

For the second time this season the Massachusetts hockey team is the cream of the college hockey crop. UMass (17-3-0, 9-1-0 Hockey East Association) made its way to the top of the USCHO poll once again on Monday, earning 35 first-place votes as the new No. 1 team, leapfrogging No. 2 St. Cloud State.

The Minutemen were previously atop the rankings on Dec. 3.

A weekend sweep past Vermont punched UMass’ ticket as the top-ranked squad, beating the Catamounts 4-1 and 5-1 at the Mullins Center.

Much like their first time around, the Minutemen will immediately be put to the test with a home-and-home with No. 8 Northeastern this weekend. UMass squared off with then-No. 8 Quinnipiac Dec. 7-8 and split the set with the Bobcats.

The Huskies (14-4-1, 8-2-1 HEA) sit one point behind the Minutemen for first place in Hockey East and enter the showdown after taking two-of-two against Maine in Orono.

“I think they are the most similar to us,” coach Greg Carvel said about Northeastern’s makeup. “They have an extremely skilled backend and are very similar to what we are. It’ll come down to who plays harder.”

Carvel likened this upcoming matchup to that with Quinnipiac in early January. The third-year bench boss feels his team is going to have to bring its A-game, especially with the No. 1 ranking providing bulletin-board material for the Huskies.

“It’s absolutely a target for other teams,” Carvel said. “We used that [motivation] against Ohio State. It’s the second time we’ve had this ranking. The first time, we didn’t have it very long but hopefully we do better this time.”

Northeastern’s ability to score with relative ease—3.58 goals per game—combined with its stingy defense—2.00 goals allowed per game—will make it a tough assignment for the Minutemen to ace.

Grant Jozefek has 19 points on 10 goals and nine assists as the Huskies’ top point-getter with Brandon Hawkins, Tyler Madden and Jeremy Davies closely behind with 18 points. Zack Solow’s 11 goals leads the team.

Cayden Primeau assumes starting goaltending duties for Northeastern. His .923 save percentage and 2.22 goals-against average slot in at fourth-best in Hockey East. The sophomore netminder recently returned from the World Junior Championships in Vancouver where he backstopped Team USA to the Silver Medal.

Matt Murray was stellar against the Catamounts and will get at least one game against the Huskies. Filip Lindberg returned from the World Juniors this weekend where he won a Gold Medal with Team Finland, but Carvel didn’t say whether or not he’ll see time in the net.

Murray, as he has done virtually all season, holds the top stats in Hockey East with a .933 save percentage and a 1.74 goals-against average, as well as a 14-1-0 record.

“I think you’re going to see the best out of both teams,” Carvel said. “Both want to prove something to each other.”

Northeastern ended UMass’ season last year in the quarterfinal round of the Hockey East playoffs however Carvel said since both teams are different, he doesn’t think about the revenge aspect at all.

Puck drop for Friday night’s game at Mullins is set for 7 p.m.