No. 2 UMass kicks off Hockey East campaign against Vermont 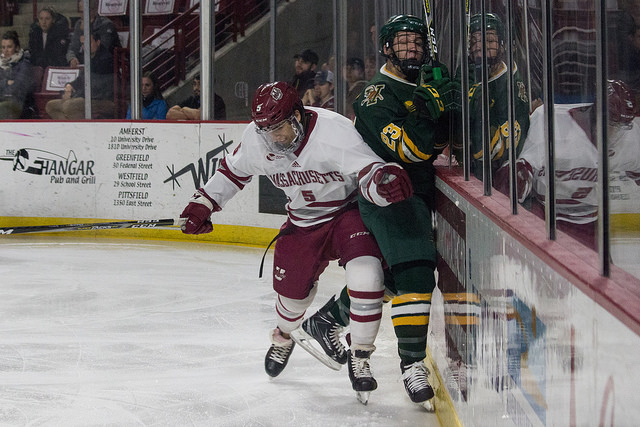 After posting a 15-3-0 overall record through its first 18 games of the regular season, the Massachusetts hockey team is set to embark on the Hockey East Association portion of its 2018-19 schedule.

Following a weekend split with UML, No. 2 UMass’ only league loss, and AIC to open the second half, the Minutemen (15-3-0, 7-1-0 HEA) begin their final, grueling stretch with a home series against Vermont.

UMass edged the Catamounts (8-9-1, 1-6-1 HEA) in the first round of the Hockey East playoffs last season, its first playoff series win in Amherst in 11 years, and this will be their first meeting since.

The Minutemen enter the series tied atop the Hockey East standings, while UVM sits in last place.

“I actually think they’re playing quite differently,” Minuteman coach Greg Carvel said after practice Tuesday. “From what I’ve seen, last year I remember their defensemen being a little more aggressive in the offensive zone, it looks like they’re playing a little more passive now and waiting for teams to make mistakes and counteract. So, a slight change, but for the most part they’re still a very similar team.”

The Catamounts are led in scoring by a pair of high-powered sophomores, Max Kaufman and Alex Esposito. With 12 and 10 points through 13 games, respectively, the duo showcase the skills to score.

In the aftermath of a mediocre start to the second half last weekend, however, UMass is more worried about improving its own game, rather than focusing on what Vermont brings to the table, Carvel said.

“I think Friday against Lowell we were rusty, and we weren’t our usual selves,” he explained. “But I thought Saturday we looked more like our old selves, a little more tenacious, harder on the puck, and did a better job of getting pucks to the net. It’s tough when you don’t play for three and a half weeks. You can’t emulate in practice the compete level necessary. You have to do it against other players.”

“Unfortunately, that’s part of a break, you fall off from your game, but I think we found it back Saturday and learned a lesson Friday night,” Carvel added. “I’m confident that we’ll be ready to go this weekend.”

As UMass enters conference play, John Leonard leads the league in scoring with 15 points on four goals and 11 assists through eight Hockey East affairs. Sophomore Mitchell Chaffee sits at No. 3 with 13 points on five goals, while graduate transfer Jacob Pritchard trails closely behind with 11 points on five goals in league action.

In Friday’s home loss, none of the top scorers registered on the scoring sheet. In Saturday’s 6-1 pounding of AIC in Springfield, the trio led the charge with six points and they all scored.

To continue building on the improvements that began to unfold in the bounce-back win, the trio of Leonard, Chaffee, and Pritchard will have to show up, along with another key element, Carvel said.

“What we found this week against Lowell is that we didn’t get to the net very well and that we didn’t get enough pucks on net,” he said. “We need to start scoring the ugly goals, rebound goals, jams, deflections, and finding ways to score goals against teams that play well defensively because you run into that a lot of the time. That’s one area where, as a staff, we really think we need to get better.”

The Minutemen will face a familiar foe in junior UVM netminder, Stefanos Lekkas, as they look to continue to rediscover their stride. In 18 games, Lekkas is 8-9-1 with a save percentage of .935.

Currently tied atop the Hockey East standings with Boston College (14 points), UMass’ opening weekend against the Catamounts provides a solid opportunity to continue refining its game and to garner some crucial league points heading into an important Jan. 18-19 series showdown with No. 12 Northeastern.

“The season takes on a different angle when it’s all Hockey East games the rest of the way,” Carvel said. “Ultimately we want to finish high in our league and try to win a championship. The only way we can do that is to play well in the league and hopefully earn home ice in the playoffs — that’s a huge advantage. So, that’s our focus; to finish in the top four. We’ll just take it game by game, opponent by opponent.”

The race to the finish starts on Friday and Saturday at the Mullins Center. Puck drop at 7 p.m.