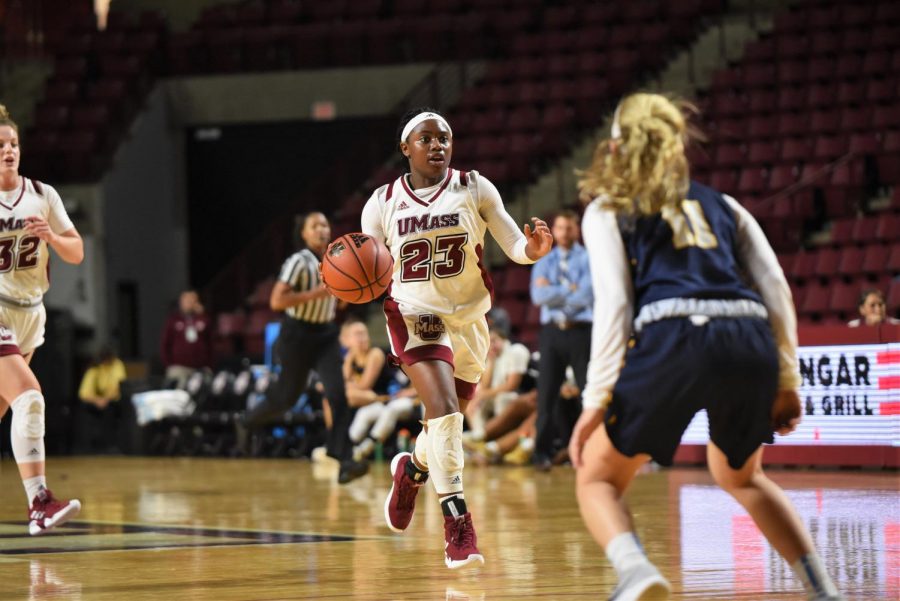 Following a disappointing 70-52 loss to George Mason on Wednesday, the Massachusetts women’s basketball team came out firing on all cylinders and secured a 70-58 victory at Davidson on Sunday.

“I thought that, number one, we competed for 40 minutes, which we had to do,” said coach Tory Verdi. “The first half was back-and-forth. We executed and they did too. In the second half I just think we did a great job of knocking down some shots, knocking down some threes. They pressured us, we did a great job of attacking their pressure and because they were gambling and sending two to the ball, we made the extra pass and got open shots.”

Junior guard Vashnie Perry tied her career high with 18 points in the winning effort, a tally she hadn’t reached since her first career start for the Minutewomen (11-8, 3-2 Atlantic 10) against St. Bonaventure last season.

“I think right now we’re figuring our identity out and getting a little bit more structured as far as rotations go,” Verdi said. “People are falling into certain spots. [Vashnie Perry] has done a great job being a leader for us on the floor at the point guard position, getting the ball to her teammates, getting us through sets. Obviously, there was a direct reflection of that here today.”

Hailey Leidel also aided the Minutewomen scoring attack, adding 15 points and a team-high seven rebounds in the victory. Genesis Rivera rounded out the double-digit scorers for the Minutewomen on the day, tallying a season-high 12 points.

“I thought that [Genesis Rivera] came in and did a great job for us offensively,” said Verdi. “She knocked down some big shots for us. Vashnie Perry did a great job here today, probably the best game of her career and at UMass. Just facilitating, taking care of the basketball and getting everybody involved.”

Despite leading by only a point heading into half-time, the Minutewomen were able to shift into second-gear in the second half. Making the most of an inefficient 31.3 field goal percentage from the Wildcats (10-8, 4-1 A-10), UMass was able to stretch the lead throughout the second half.

Some of the success of the Minutewomen scoring attack can be credited to their second unit. A source of energy, the UMass reserves were able to outscore Davidson’s bench by 22 points.

The UMass defense also impressed Sunday. The Minutewomen confused the Wildcats by mixing up defensive sets throughout the game, forcing 15 turnovers in the win.

“I think we did a great job of mixing up our defenses, just keeping them out of their comfort zone,” said Verdi. “They were always trying to figure out what set we were in. They came out of timeouts thinking we were in one defense and we’d be playing another. They couldn’t really run or execute some sets. We just kept them on their heels, switching things up was beneficial for us.”

The Minutewomen were able to control the attack of junior Justine Lyon, who came in averaging 12.7 points per game but managed only three points on 1-for-5 shooting from the field against UMass.

“I thought we did a great job on [Justine Lyon],” Verdi continued. “She’s a scoring guard and she’s been in the league the last couple of years, we just did a great job of staying in front of her and not letting her get easy baskets.”

After starting 2-2 in conference play this season after a series of up and down games, the Minutewomen may have made a statement in handing Davidson its first Atlantic 10 loss of the season. For the Minutewomen to continue this success, Verdi has been preaching one thing all season: consistency.

“I told them that if we play like this, we’ll put ourselves in a position to where we can be a top four team in the conference, meaning we can play for a championship,” Verdi said. “We just have to figure out how to be consistent. With this team, it just varies day to day. We have to figure out how to be more consistent, but when we do, I think we can go on a run and do something special.”