Sixth annual Women of Isenberg Conference expected to sell out, open to all students

The conference will be held on Feb. 23 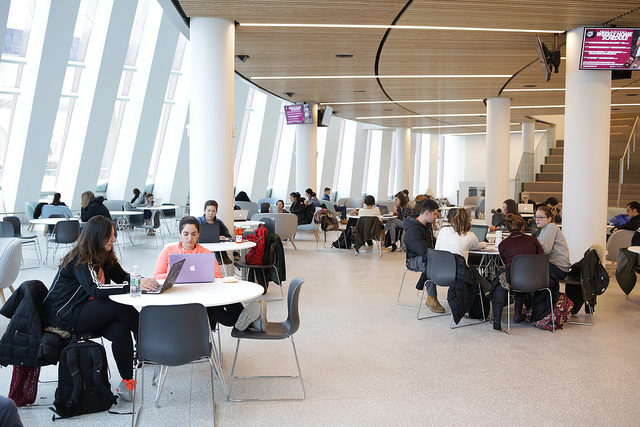 Six years ago, the Women of Isenberg Conference was created to connect current students and alumnae. The student-run event saw 124 attendees and one corporate sponsor, Target.

Today, the conference remains entirely student-run, and its growth in attendees has accumulated to 255 percent. In 2018, the event sold out for the first time and this year’s event is expected to sell out its 440 tickets again.

The WOI Conference will be held on Feb. 23 from 7:30 a.m. to 3:20 p.m. This year’s keynote address is by Diane Isenberg, founder and director of Ceniarth and the daughter of Eugene Isenberg, whom the Isenberg School of Management is named after.

“Our biggest initiative is making it available to all [University of Massachusetts] students because it’s professional development,” said Katelyn May, an operations committee member. “It’s not centered toward business students, it’s really just skills everybody entering the workforce needs to have: networking, building your brand, learning about diversity and inclusion, all that type of stuff.”

There will be three breakout sessions where attendees have the choice to go to two out of the 10 panel discussions and one of the five workshops offered. A luncheon presentation and a career reception are also on the day’s itinerary.

In an effort to show that the conference is working to represent all identities, WOI launched their ‘More Than’ campaign this year.

“The ‘More Than’ campaign was basically initiated because when we have our registers sign up on the website to participate in the conference, we require them to write a ‘more than’ statement and the statement is in the structure of ‘I am __, but I am also __,” said Samantha Boardman, vice president of marketing.

“So for me, I could say, ‘I am a twin, but I am also an individual.’ And the purpose of this is to overcome stereotypes and common perceptions people are often faced with,” the marketing and public health senior said.

Also for the first time this year, every speaker was hand-picked by WOI planning team, headed by President of Women of Isenberg Mackenzie Wise, as opposed to having speakers apply online like in previous years.

“I think that it’s really improved the quality of our speakers and the diversity aspect too,” said May, a finance and communication junior.

Tina Giorgio, president and CEO of ICBA Bancard, Inc., Catherine Carlson, senior vice president of corporate partnerships and premium activation of the Orlando Magic basketball team and Shalini Bahl, founder and Mindfulness Consultant at Know Your Mind, are set to attend. A full list of speakers can be found on the WOI website.

The career reception in the latter half of the day will give students a chance to give their resumes, exchange business cards and talk to corporate sponsors present about opportunities that are available. Some of this year’s corporate sponsors include DCU, United Technologies, TJX, EatonVance and PricewaterhouseCoopers.

“The corporate sponsors are awesome because they really are there to meet our students and they believe in the mission of the conference and so they see these really driven students early on a Saturday morning and know that they are the kind of people they want to talk to,” Boardman said.

Women for UMass Amherst is also working with the conference this year by offering ticket waivers to a handful of UMass students who may not be able to afford a ticket. To apply, students can complete a Google Form and WFUM will cover the $25 cost of admittance.

Haley Chupka, operations committee member and junior operations and information management major, became involved with the WOI planning team after joining the Isenberg Women in Business Club, which helped create the conference, and attending last year’s conference. Her favorite part of the Conference was the public speaking workshop, which is being offered again this year.

“This was just so different from anything else I’ve ever been to, at any conference. I really took away so many skills that I still use today,” Chupka said.

Tickets will be available for purchase in the Campus Center, the Isenberg Atrium and online until they are sold out.