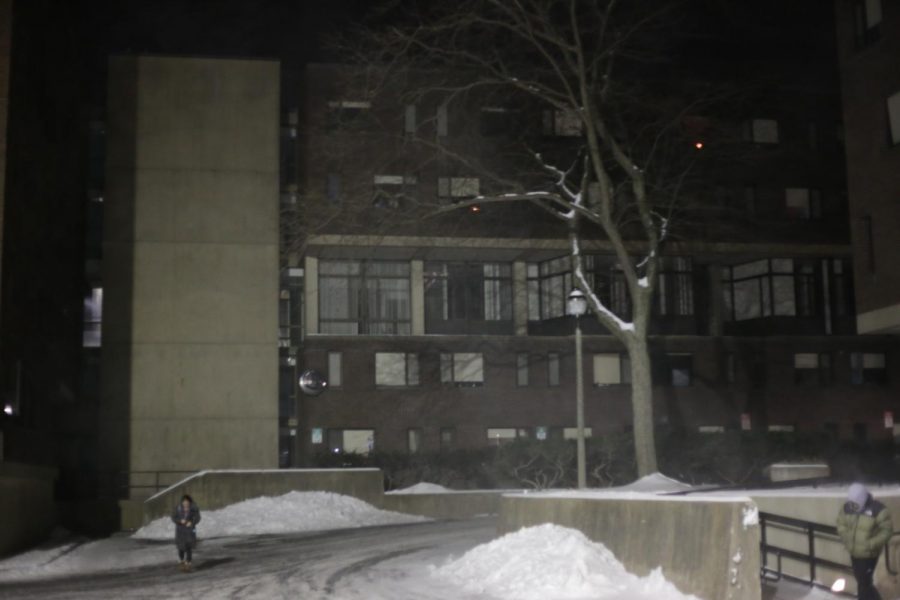 Several buildings in the Southwest Residential Area, including the Hampshire Dining Commons, at the University of Massachusetts lost power on Wednesday amidst snow squall warnings in the Amherst area.

The power went out shortly after 5:30 p.m. Wednesday night and wasn’t restored until after 7 p.m.

“We heard the wind first,” said senior Xavier Sanchez-Felix, a resident of Coolidge Tower. The lights went out in the common room where he was studying, leaving the area pitch black until a few emergency lights came on. Since the elevators were inoperable, he took the stairs down from his ninth-floor dorm room.

Freshman Brittany DeBarros, a resident of Kennedy Tower, was lying on her bed when things went dark. “I thought it was just me, so I went to go flip my lights on,” she said, adding that she didn’t realize the whole tower was without power until she saw the hallway had gone dark too.

At Hampshire DC, employees were forced to write down student ID numbers on a sheet of paper to account for meal swipes.

“I was doing salad bar, but they wouldn’t let me go into the freezer because they didn’t want the cold to escape,” said Rubee Sandhu, a UMass senior who works as kitchen prep for Hampshire DC. Though not nearly as crowded as usual during the dinner rush, some students still dined under the glow of a few scattered lights and exit signs.

“We were cleaning tables for a while, but now we’re just kind of sitting here waiting for further instruction,” said Sandhu’s coworker Lily Coppinger, also a senior.

Chicken & Co. in the Southwest area also suffered from the outages.

“We had to throw away all of our fried food,” said UMass sophomore and employee Caroline Wienkamp. “Five pounds of chicken, three pounds of French fries.”

Some students were worried about losing heat, with temperatures expected to dip below zero degrees in the early hours Thursday.

“The lobby was just as cold as the outside when we left,” said freshman Matthew Evans of Kennedy Tower, adding that with limited laptop and phone batteries, he was concerned about completing class assignments. “Class isn’t going to be cancelled for us, but we still have our homework due. It’s not our fault we lost power.”

At approximately 7:10 p.m., UMass Facilities and Campus Services stated in an email that “crews are on scene and actively working to restore power in the southwest area of campus. Affected buildings have heat and emergency lighting. Card access to the residential halls continue to work. Additional updates will be provided.”

Power appeared to have been restored to many of the buildings by 7:20 p.m. At 8:37 p.m., an email alert was sent to all UMass community members stating that power was officially restored in Southwest.

David Geddes can be reached at [email protected]