The finished project will include a promenade, a repurposed ballroom and a media center 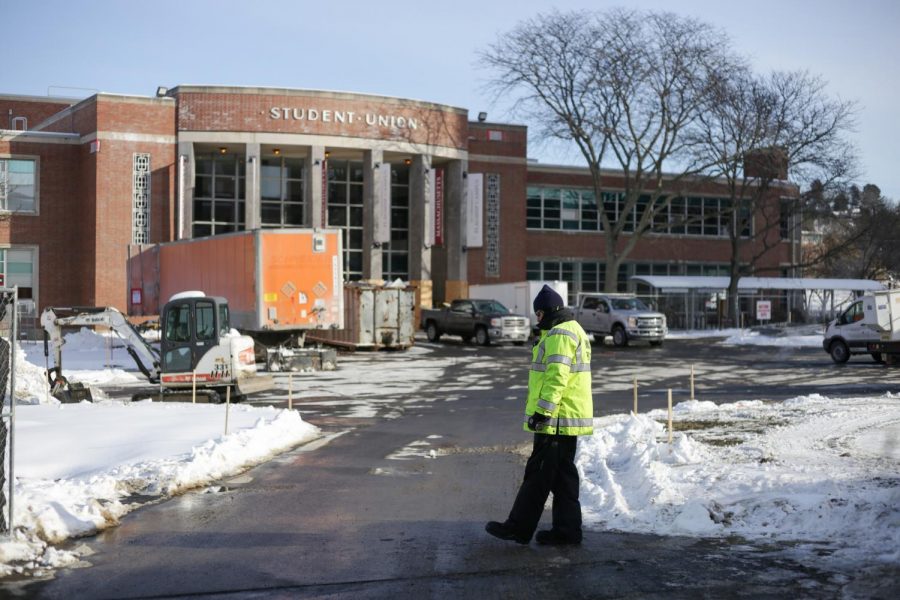 The Student Union at the University of Massachusetts has begun its $62 million renovation project, prompting the big question: What’s going to change?

Coming back to campus, students were surprised to notice not only giant construction vehicles surrounding the Student Union, but a metal fence partly blocking off the building as well. According to an email from Campus Pulse, students will have to use temporary walkways located on the south and west sides of the site to get around the building. Additionally, construction vehicle traffic will occur via Hicks Way with a Main Gate in the northwest corner.

Students will also have to be mindful of daily construction taking place from 7 a.m. to 3 p.m. on the construction vehicle route.

“I first [thought], I don’t like it,” said Young June Cho, a junior psychology major. “I don’t find [the construction] necessary, I find it [un]necessary and the construction is really disturbing to me because it is in the center of campus. And most students walk through there and it’s making the time longer for students to get to classroom.”

Alternate walkways, vehicles and the site fence will remain until fall 2020, when the renovations are estimated to be completed.

Bicycles that are still set on racks of the Student Union can be collected at the Main Gate from 7 a.m. to 3 p.m. Bicycles remaining after January 25, will be collected to Tillson Farm.

While students are walking around the building, construction workers will be working almost a full year-and-a-half to bring brand new features to the 62-year-old building.

One of the biggest changes that students can expect to see in the fall of 2020 is a “Main Street style” promenade, according to the UMass Building and Construction website. Part of the Student Union’s main level will be dedicated to the Main Street style promenade. It will include People’s Market, which will be on the south side of the building. The Student Organization Resource Center, the Student Government Association, the Center for Education Policy and Advocacy and Student Bridges will all have a shared space overlooking the promenade. The promenade will also have space for a new student business, said Mary Dettloff, deputy director of News and Media Relations, in an email statement.

Dettloff also said the indoor walkway located on the lower level of the student union will include Earth Foods and Campus Print and Copy.

Other changes include a new entry and outdoor plaza, along with a streamlined connection to the Lincoln Campus Center. Walking into the Student Union from the main west entrance, there will be another set of stairs connecting the two buildings, thus eliminating the back service hallway Detloff explained.

The ballroom will be repurposed as a divisible multipurpose room for small functions and events. The room will include an audio/video system and heating and cooling improvements.

A student media center, which will be located on the lower level, will be built to serve all three major independent campus news organizations: The Massachusetts Daily Collegian, UVC-TV 19 and WMUA. Funding for the spaces will come from the University itself, along with a small rise in student activity fees.

The renovation came after a vote in December 2017 to increase the student activities fee in exchange for updated the Student Union, which has not been updated since its opening in 1957.

Anthony Vitale, president of the Student Government Association, said “there were about 1,000 votes for ‘no’ to the referendum question and about 1,200 votes for ‘yes,’” in a previous Collegian article.

Alvin Buyinza can be reached at [email protected] and followed on Twitter @ abuyinza_news.