Cold from deep, but effective nonetheless 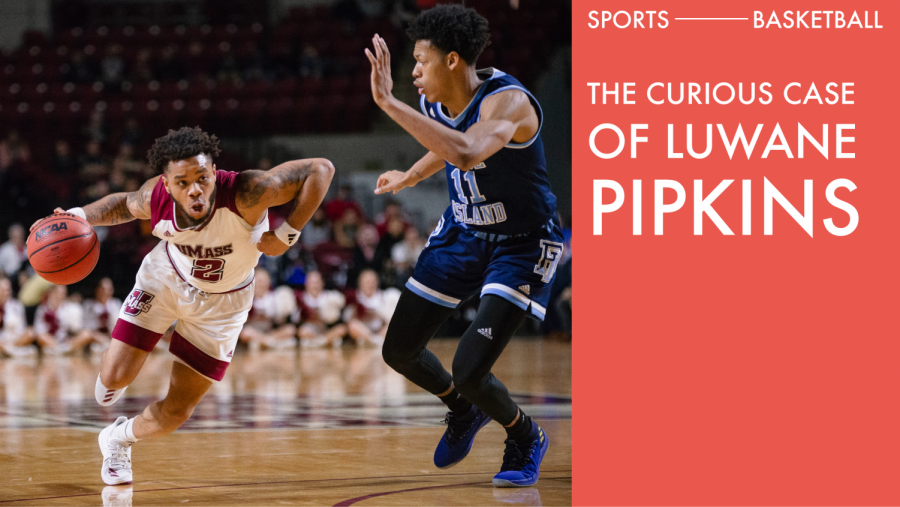 This column’s title is a probably a dead giveaway that at least one of these players is Luwane Pipkins, and anyone who’s closely observed the Massachusetts men’s basketball team both this season and last can probably guess that “Player A” is Pipkins in 2017-18, and “Player B” is Pipkins in 2018-19.

Sunday’s win over Rhode Island was an important one for UMass to get back on track, but it was also a bit of a microcosm of Pipkins’ season as a whole — the shots aren’t falling, but he finds a way to be effective.

The two numbers that jump out immediately from those statlines are probably the shooting percentages: how does a guy go from hitting 43 percent of his shots and nearly the same clip from three, to seeing his field goal percentage dip so significantly and his 3-point stroke just about crater?

Such was Pipkins’ Sunday afternoon — the junior missed his first 10 shots and finished the game 2-of-14 from the field and 0-of-4 from 3-point range, including one that missed so wide left that it only caught a piece of the backboard.

It’s been that sort of year for Pipkins. In the five-game stretch between the win over Providence in early December to a last-second loss to Saint Louis on Jan. 9, Pipkins was a paltry 3-of-34 from deep, an extremely rough 8.8 percent clip. Over that same stretch, he was 30-of-89 — 33.7 percent — from the floor overall.

Pipkins’ shooting struggles are bizarre, really. All of this from a guy who developed a reputation last season as one of the A-10’s best scorers, a guy who could make space with a single lethal jab step or a quick crossover and a step-back before burying a three whenever the Minutemen needed it most.

What strikes me about all of this is that despite the fact that he can’t seem to buy a three, and layups and fallaways just won’t seem to fall, Pipkins has still managed to be an all-around effective guard, even sans his best weapon.

Take a look at those two statlines again: 4.0 assists per game last season, 5.3 a night this season. He’s not a “true point guard,” perhaps, but Pipkins has done most of his work this season in the lane, slicing the floor and either finishing himself, or, when that hasn’t worked, finding open shooters.

Carl Pierre earned a lot of the credit for UMass’ incredible comeback win over Providence, and rightfully so — but almost every three Pierre hit in the second half came in transition, with Pipkins driving to the rim, drawing defenders and hitting Pierre for a rhythm three.

Sunday was more of the same. Pierre’s fifth and sixth threes of the night were products of Pipkins’ drive-and-kicks — he kept UMass afloat in the second half, even when his own shots just wouldn’t go.

I’ve seen that “true point guard” thought on Twitter a thousand times, and Matt McCall even echoed it at practice last week; yet somehow, Pipkins is picking up assists at a rate good for third-best in the A-10.

The leap in his rebounding numbers is even more impressive, considering Pipkins stands about 5-foot-8 — he’s listed at an extremely generous 5-foot-11, but told me last February he’s “5-foot-8, maybe 5-foot-9 on a good day.”

He’s the smallest guy on the court, but is pulling down over five rebounds a game, second among Minutemen, and there’s a bit of discrepancy in size between the Pipkins and all 6-foot-11, 310 pounds of Rashaan Holloway, who leads the team. He’s sixth among A-10 guards on the glass, and the five ahead of him have quite a bit of height on him too.

What’s really impressed me about Pipkins this season, aside from his floor generalship and his rebounding prowess — and, by the way, he’s been relentless defensively this season, but there aren’t really stats to cite there — is his ability to get to the line when the shots aren’t falling.

Pipkins took around 4.5 free throws per game last season, but is taking 5.8 a night this year, a near 30 percent increase in his trips to the charity stripe. His nearly six attempts a game is second in the A-10 and he’s hit nearly 80 percent, which has helped salvage scoring nights like at Georgia and Saint Louis — he was 0-for-8 from 3-point land in Athens but went 8-for-11 at the line, before missing all four of his 3-point attempts against the Billikens but hitting eight of his 10 free throws.

It’s been a really weird season for Pipkins. I have no idea what’s up with his 3-point shot. Part of me thinks that perhaps last season was a blip and he’s just regressing to the mean (after all, he only shot about 32 percent from deep as a freshman), but then again, he came out this season and hit 41 percent of his threes in November. But then he hit less than 16 percent in December and just 25 percent in January, and the mystery continues.

Perhaps Pipkins has some nagging injury or illness we don’t know about that’s affecting his jumper, or perhaps it’s a string of bad luck. Maybe last season was an outlier, and this is the kind of shooter he is.

Regardless, without the help of his 3-point shot, Pipkins has managed to be very effective this season as a distributor and as a rebounder, getting to the line and hounding opposing guards defensively, and will certainly earn A-10 First Team All-Conference consideration in March.

And if those 3-pointers start falling on top of that, Pip’s going to be a problem.