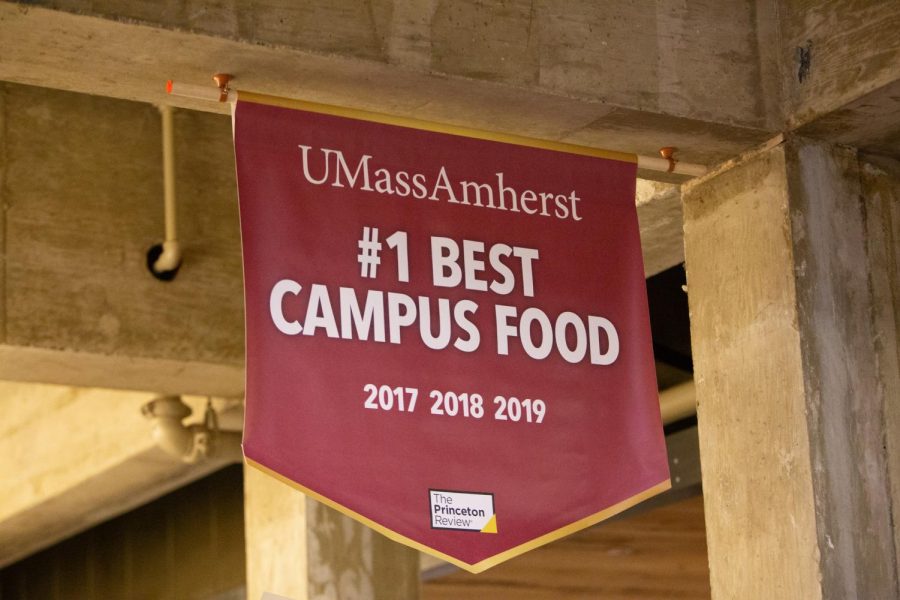 Both parties will gamble on Super Bowl LIII this Sunday where the New England Patriots will face the Los Angeles Rams. According to the wager, if the Patriots win the Super Bowl this year, a member of UCLA’s culinary team will visit UMass to serve Dodger Dogs, Kogi Tacos, tortilla soup and avocado toast. If the Rams win, UCLA will receive a visit from a top UMass chef sponsored by North Coast Seafood of Boston and Blount Fine Foods of Fall River, Mass. to serve New England chowder, Boston cream pie and a clambake.

To strengthen spirit among those dining at Blue Wall before the game, Toong has added “Send the Rams Back to California Rolls” at Wasabi, “Atlanta Bound Americano” at People’s Organic Coffee and a “Beat LA Pizzetta of the Day” at Tavola.

According to the article, both Toong and UCLA Dining Services’ Senior Director Al Ferrone “are looking forward to the competition.” Ferrone grew up on the East Coast and says that he misses some of his favorite foods “such as a great clam bake and a big bowl of chowder.” Ferrone said he and his team “are salivating in anticipation of having this great meal after the Super Bowl” and that “What makes this even more special is knowing that it will be prepared from scratch from the extremely talented culinary team at UMass.” Toong has engaged in similar wagers eight times while maintaining a record of five wins and three losses. He confidently predicts “the Pats will win 28-21.”

In an email, Toong discussed his own plans for Sunday night before and during the Super Bowl: “I will tour the DC’s first with Garett Distefano, our director of UMass Dining to make sure we are ready to serve everyone; and then I will watch the game for sure.”

Toong is hopeful to see the Patriots win and make up for last year’s Super Bowl loss against the Philadelphia Eagles, which he said was “a tough loss – the Eagles played a better game.”

Toong acknowledges however that both wins and losses are bound to happen and that “You move on, just like any business, you need to be consistently at the top of your game to be #1 and look for opportunities to improve.”

He remains hopeful and confident in the Patriots this year, saying that though UMass had to send a chef last year to Pennsylvania State, this year he is “really looking forward to sharing with our students, some Korean Gogi Tacos and Dodger Dogs, and Tortilla Soup with Avocado Toast.”

Some UMass students expressed enjoyment in the wager. Senior computer science major Kyle Ghordino said that he respects the friendly competition and looks forward to experiencing UCLA dining. Ghordino feels conflicted about how he predicts the wager will end, saying “I don’t think that the Patriots’ defense has been that good this year,” and “the Patriots will have a hard time going up against the Rams’ defense.”

Other UMass students feel that the wager inherently puts UMass at a disadvantage regardless of the outcome. Sophomore physics and math major Anshul Bhargava is skeptical that UCLA can offer food as good as the food available at UMass. Bhargava says that he would rather UCLA “fund a lobster dinner or a pantry for us,” adding that “we can cook our own food.”

Bhargava hoped that he will have time off from his research lab to watch the game and, as a Patriots fan, is confident that they will win.

In his email, Toong addressed this type of skepticism, saying, “I know the director Al of UCLA well and really admire their program, and I can just imagine how delicious this ‘win’ will be.”

The campus atmosphere is likely to get passionate during and after the game regardless of the outcome. While the campus is predominantly composed of Patriots fans, there are those who will be rooting for the Rams. Many students on campus, regardless of whom they support, are likely to have a strong investment in the game.

Toong is looking forward to the festivities. “It’s all about having some fun with your friends and cheering for whatever team you support in a responsible and respectful way,” he said. “Have fun, but be safe.”

Bobby Morse can be reached at [email protected]