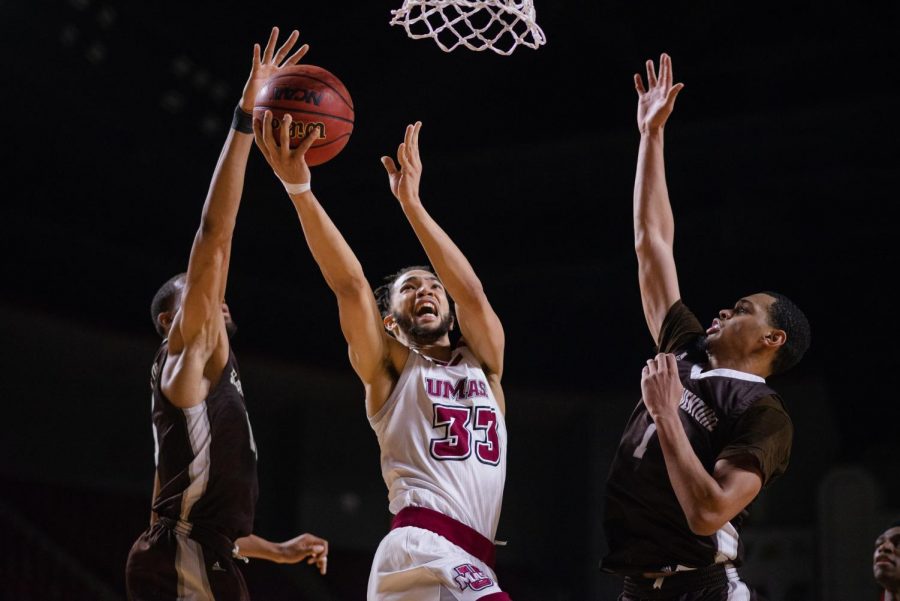 An abysmal second half sent the Massachusetts men’s basketball team to its seventh consecutive defeat, a 65-51 loss at home to St. Bonaventure Wednesday night.

UMass (7-12, 0-6 Atlantic 10) struggled to find offensive rhythm against yet another A-10 opponent, failing to string together points throughout the second half. The Minutemen relied primarily on the mercurial three-point shot of Kieran Hayward to generate offense.

“We never get easy baskets,” McCall said. “Offensive rebounds – we grab them, we bobble them, we miss layups. Everything we get is so earned. It’s move the floor and get Luwane [Pipkins] on a pick-and-roll, or send Carl [Pierre] off a baseline run, or get this. We try to make the right play, and when we make the right play, it doesn’t go in the basket.”

UMass took an eight-point lead late in the first half, but St. Bonaventure (7-12, 3-3 A-10) went on a 10-0 run to take a two-point lead into halftime. The Minutemen tied the game again three minutes into the second half, but the Bonnies pulled away the rest of the way as UMass crumbled.

Even that eight-point lead was more or less a mirage, built on three straight threes from Hayward when no one else could make a shot. Hayward, after making three of his first four from deep, missed five of his last six three-point attempts, finishing the night 4-for-11 from the field and 4-for-10 from three.

The Minutemen struggled in the paint, which drove them to take one three after another and keep feeding the ball to Hayward and Luwane Pipkins outside. UMass finished 10-for-33 from three, only taking 21 shots inside the arc.

“Our identity right now is kind of we live and die with that [three-point shooting], and it’s not working,” McCall said. “There may have been games this year that it worked, maybe it worked for seven games, but it’s not working right now. We need to find ways to put more pressure on the paint, we have to find ways to get to the free throw line more, because defensively, our defense is giving us a chance.”

After a strong start to the game, the UMass defense slowly fell apart down the stretch, giving up 50 points in the final 24 minutes and allowing the Bonnies to stretch the lead to 21 before some meaningless shots fell with the game well out of reach.

While St. Bonaventure got going on offense after halftime, UMass shot itself in the foot with a slew of fouls and turnovers. Two quick fouls on Djery Baptiste around five minutes into the second half proved particularly costly, as UMass was down one of its best defenders for much of the second half.

All told, the Minutemen gave St. Bonaventure 11 free throws, including two on a technical on McCall for yelling at the refs late in the game, and the Bonnies sank 10. UMass also turned the ball over eight times in the second half, which translated to 11 points for St. Bonaventure.

Without anything going right on offense, practically no defensive effort would have been enough to secure a UMass victory. Once St. Bonaventure took its first double-digit lead with 8:23 left in the game, the Minutemen were more or less finished.

“Al Pacino said it best: we’re in hell,” McCall said. “This is not fun, and we got to figure some things out offensively.”

Still winless in the A-10, UMass will get another chance on Sunday against Rhode Island.