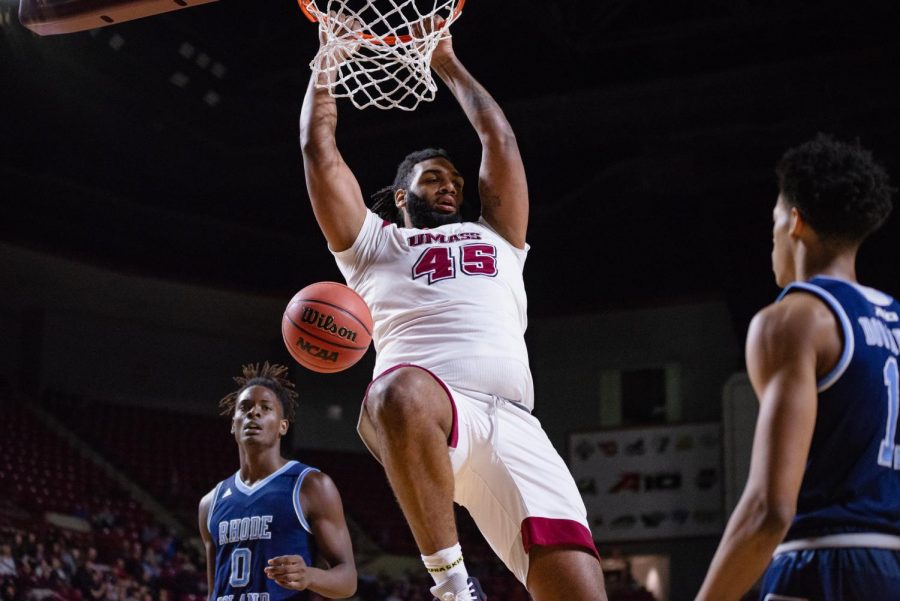 In easily its most complete performance since November, the Massachusetts basketball team raced ahead of Rhode Island late in the first half and never looked back en route to a 77-70 win over Rhode Island Sunday afternoon.

With the win, UMass snapped a seven-game losing streak and earned its first Atlantic 10 win.

“I would say this is a good breakout win for us,” forward Jonathan Laurent said. “Feel like we put pretty much everything together tonight. Made shots, played pretty good defense.”

The Minutemen came to life on offense, eclipsing 70 points for the first time since Dec. 30 against Georgia. Pierre led the way with a season-high 22 points on 70 percent shooting, while Jonathan Laurent and Luwane Pipkins each scored 12.

Pipkins only hit two of 14 shots from the floor, but aggressively pushed the ball down the lane and ended up taking nine free throws. He also finished with nine assists.

“I thought he was terrific,” Coach Matt McCall said. “Forget his shooting percentages in the game. He had nine assists, 12 points, 8-of-9 from the free throw line. Everyone’s running at him, they’re blitzing him, they’re throwing bodies at him, they’re hip-checking him, and he’s getting down the lane and having confidence in his teammates.”

While Pipkins ran the offense, Rashaan Holloway and Djery Baptiste both dominated down low, combining for 17 points on 8-of-9 shooting. UMass finished with 36 points in the paint, after scoring just 16 points inside against St. Bonaventure Wednesday night.

“Those guys were huge down there,” Pierre said. “I don’t really think Rhody had much of an answer for them. Once we got the ball down there to them, it started opening up the floor for us guards to drive, or to get kick-outs for threes, and I think it helped our entire offense.”

The UMass defense held Rhode Island to 25 points in the first half, but had its struggles down the stretch, with 10 fouls in the second half that translated to eight points for the Rams. Rhode Island’s Tyrese Martin and Jeff Dowtin made key shots late to keep the Minutemen from putting the game away.

“I would’ve liked to see us get more stops down the stretch,” McCall said. “We were fouling too much. The clock was stopped when we gave up some threes in some of our rotations. But we got to do a much better job there late in the game. Every game it’s 20-something points in the first half, 40-something in the second. We have to do a much better job there in the second half.”

The defense was supported by a vastly improved offense, where the Minutemen were able to move the ball and shoot more effectively than they had in at least a month. Every time Rhode Island scored, UMass was able to answer quickly and maintain control of the game.

“Multiple guys were touching the ball in a possession,” McCall said. “It wasn’t like running one pick-and-roll and try to get a shot up. That’s how we have to play, and that’s against a team that’s denying, pressuring, hard-hedging pick-and-rolls. The ball was really moving around.”

No longer winless in the A-10, UMass will try to keep the momentum going on the road Wednesday against a struggling La Salle team.