UMass seeks consistent play ahead of clash with Saint Bonaventure

Minutewomen have yet to win three straight games 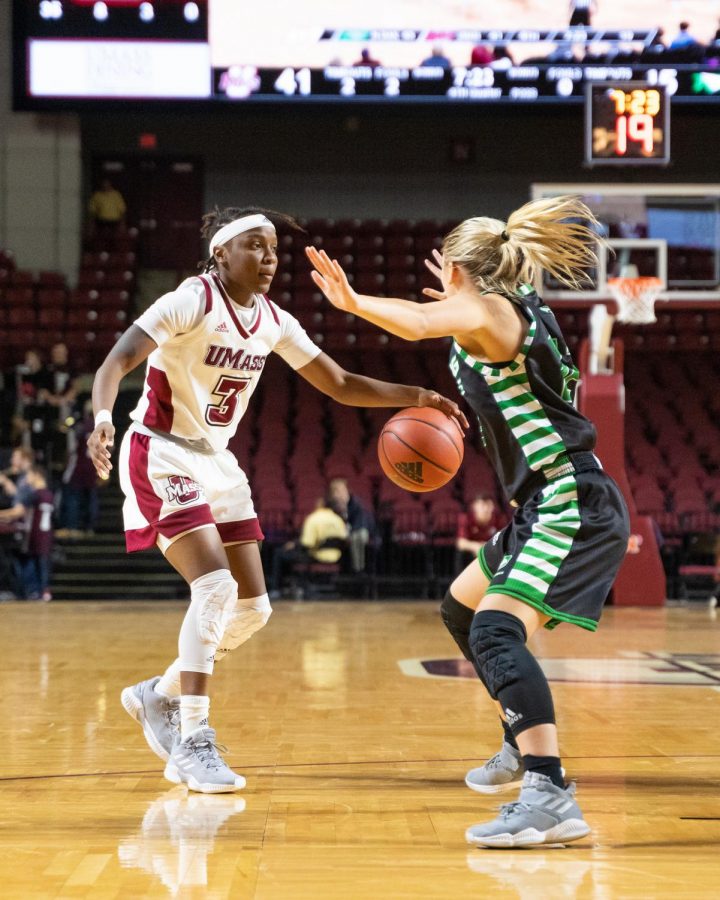 A struggling St. Bonaventure team offers a good chance for the Massachusetts women’s basketball team to find consistency in what has been an inconsistent season heading into the end of Atlantic 10 play.

UMass (11-8, 3-2 A-10)  has struggled to put together a prolonged run of success this season, as the Minutewomen have yet to put together a win streak of more than two games. Stringing together wins at this point in the year, in the middle of the Atlantic 10 schedule, could prove vital for UMass if it is to host a tournament game.

“For this game, we have to stay more focused than ever,” guard Vashnie Perry said. “We have to stay even more confident than we have been before.”

The Minutewomen will match their season-high win streak of two with a win over visiting Saint Bonaventure (4-14, 1-4 A-10) on Saturday. A win could also push them into the upper third of the A-10 standings.

“There’s not much to it,” Perry said. “We just have to believe in ourselves.”

Although UMass has yet to experience a three-game winning streak, they have also been fortunate enough to not go through more than a two-game skid this season.

Their ability to not let one or two losses multiply is one reason they have maintained a winning record. Inconsistency may have plagued the team most of the first half of the season, but it is a problem that the team feels is a thing of the past.

“We had our days,” freshman Destiney Philoxy said of UMass’ inconsistency, “but we haven’t had them recently. We just decided that its time to show everyone in the A-10 that we’re coming strong and no more games are being played.”

The Minutewomen have been plagued by inconsistency all over the floor, but especially its shooting. UMass has not lost a game so far this season in which they managed to crack the 70-point mark, but has only reached that mark in nine of its 19 games.

One reason that Verdi feels the team can finally find that ever-elusive consistency is that his players have finally fallen into set roles on the team.

That starts with Perry, who first earned a spot in the starting lineup against UMass Lowell and in the past two games has put up 13 and 18 points respectively. If Perry can keep her play going, it could help the Minutewomen finding a rhythm on offense.

“The ball isn’t sticking in someone’s hands,” Verdi said in response to why his team will be more consistent moving forward. “We aren’t forcing things, we’re creating things. So, we’re more fluid and structured offensively.”

St. Bonaventure has especially found things difficult on the offensive end of the floor. As a team, they are shooting 36.9 percent from the field and 30.5 percent from behind the arc.

Coming off a quality win over Davidson this past Sunday, the Minutewomen do not intend to overlook the Bonnies.

“We need to play really hard,” said Verdi, “and play together. Those are two things on both sides of the ball.”

When asked if Philoxy thought the Minutewomen would play with more consistency moving forward, she replied: “People are going to realize that we came to play. No more roller coaster rides, just straight.”

The Minutewomen will have their chance to show the rest of the A-10 they came to play at the Mullins Center on Saturday. Tip-off against the Bonnies is set for 2 p.m.