UMass struggles in A-10 opener, falls at home to La Salle 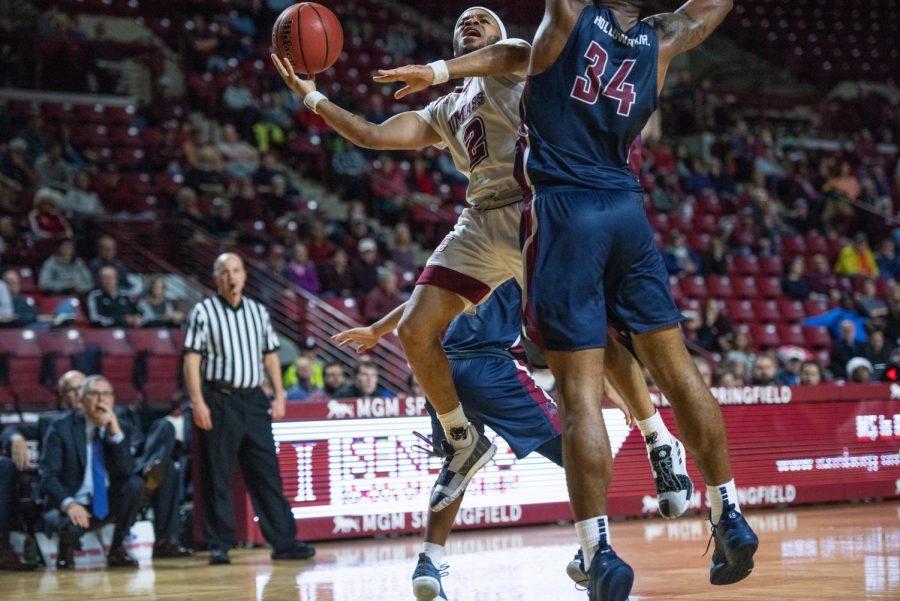 Saturday afternoon was an outing to forget for the Massachusetts men’s basketball team, as the Minutemen opened their Atlantic 10 schedule with a 69-60 home loss against a La Salle team that was 2-10 in non-conference play.

“I think the defensive focus we’ve had coming out of the Georgia game and in practice has really translated out onto the floor, and gave us a chance today,” said UMass coach Matt McCall. “But the offensive end of the floor now is a major, major issue for us. And as a coach, I have to take responsibility and look at what we’re doing and why we’re not better offensively, why we have eight assists and 18 turnovers.”

Luwane Pipkins led the Minutemen with 15 points but really struggled from the field, hitting just 3-of-16 from the floor. Carl Pierre and Jonathan Laurent had 10 each, while Keon Clergeot hit a pair of late threes to bring his total to 13.

A stellar shooting performance from Saul Phiri was all the Explorers (3-10, 1-0 A-10) needed, as the junior guard had 20 points on 4-of-5 from 3-point range, while Pookie Powell added 17, hitting free throw after free throw down the stretch to ice the game.

The Minutemen stumbled early and fell into a quick hole, but a 9-0 run midway through the first half gave them a 21-17 lead. UMass was uncharacteristically stingy on defense, and held La Salle to just 27 points in the first half.

Transfer Djery Baptiste was one of the bright spots for the Minutemen, anchoring the team defensively and blocking five shots while altering plenty more.

“Djery gave us a good lift, he’s such a physical presence when his arms are out wide and he’s defending pick-and-rolls,” McCall said. “He had five blocks in the game, I’d like to see him rebound the ball a little better… Offensively we’ve got to continue working with Djery, on rolls, catching and finishing at the basket, but again he’s only ben practicing since right before the Georgia game.”

UMass went into the half with a 29-27 lead but came out of the break cold, held scoreless through the first 4:40 of the second half.  The Minutemen only shot 29.2 percent from deep on Saturday, a difficult shooting performance across the board.

“To start the second half, we’ve got two wide-open looks from the 3-point line, and the ball was just not going in the basket,” McCall said. “And we’ve got to look at what’s the reason for that. Luwane and Carl continue to struggle shooting the basketball from the perimeter, and I don’t know if it’s fatigue or are we not generating enough good shots for them, so as a head coach, I’ve got to really look at our offense right now and I’ve got to get it corrected.”

The offense continued to stagnate in the second half, and once the Explorers built a lead, they hit their free throws down the stretch and kept UMass from ever climbing back into it in the final minutes.

The only team-wide positive was a strong defensive performance that was better than the scoreline indicated, as La Salle added an extra 11 points in the final minute on free throws alone as the Minutemen were fouling to try and extend the game.

“Our goal is to keep [teams] under 75, and they had like 63 and then they got a technical foul and all that other stuff. But that’s our goal, and I thought we did good on that, just late in possessions and late in the game we need to lock down a lot better.”

“It’d be nice to put a full game together,” McCall said. “I think we’ve only played one complete game all year, and I’d say that’s Southern Illinois, where we played two halves of basketball on both ends of the floor the right way.

I thought our guys were trying to play the right way, outside of the turnovers. Especially in the first half, we were sharing it, we were moving it, we just weren’t making any shots.”

UMass will try and rectify things during a tough road trip this week, heading to Saint Louis on Wednesday before facing Dayton in Ohio on Saturday.