Minutewomen looking to bounce back after loss to struggling St. Bonaventure 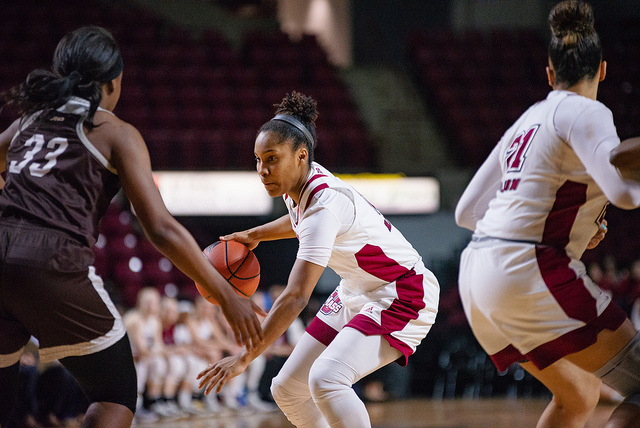 Looking to bounce back, the Massachusetts women’s basketball team will travel to Virginia for a matchup against Atlantic 10-leading VCU on Wednesday.

The Rams (14-6, 6-1 A-10) come into Wednesday’s contest riding a hot streak, winning eight of their past nine games dating back to mid-December. That stretch includes all six of the Rams’ conference wins this season, which propelled them to the top of the A-10 standings.

“We have to be really disciplined and play really, really hard,” coach Tory Verdi said. “They have depth, they have size and they do a great job defensively.”

Despite having such a successful season thus far, VCU lacks the star-studded lineup usually associated with being near-perfect in conference play. The Rams feature just one player averaging double-figures in points, sophomore guard Tera Reed.

Reed is currently averaging 13.1 points and 3.8 rebounds per game. The sophomore has cracked the 20-point mark on three occasions this season, proving herself to be VCU’s top offensive threat.

Having only one scorer in double figures means the Rams’ offense can come from a lot of different places on any given night. The Minutewomen will be forced to defend a well-balanced attack on Wednesday.

“On change of possessions they run, they attack,” Verdi said. “Hopefully we can take away their transition and get them in the half court.”

Rather than beating teams with a prolific offensive attack, the Rams rely on stifling defense to keep opponents off the scoreboard and out of games. VCU currently ranks first in the A-10 in points allowed per game at 49.5, more than seven full points better than second-place Fordham.

“They pressure you,” Verdi said of the Rams’ defense. “So, we’re going to have to limit our turnovers.”

The Minutewomen have a chance to move back over .500 in the A-10 with a win on Wednesday. Although UMass faces a tough test, it has already beaten second-place Davidson on the road this season.

“We have to execute,” Destiney Philoxy said. “If a play breaks down, we just have to keep playing. Do all the little things.”

The Minutewomen know that they must play well in all aspects of their game in order to leave Virginia with a win Wednesday. Specifically, Verdi pointed out the importance of executing their offensive game plan, as well as not getting outrebounded.

One aspect where the Minutewomen feel they have an advantage is three-point shooting. UMass is shooting 34.4 percent from behind the arc while VCU shoots at a 31.2 percent clip. The Rams have also shot only about two-thirds as many threes on the season, attempting 266 to UMass’ 355.

“We’re going to play them for the drive,” Philoxy said, “If they shoot it and they make it, they’re lucky. They’re only making four threes a game.”

The VCU game serves as the first of a two-game road trip for UMass. The Minutewomen have played .500 basketball on the road so far this season, their record sitting at 4-4.

“We have to go down there and be really good to beat them,” Verdi said.

Tip-off Wednesday is set for 6 p.m. in Richmond.