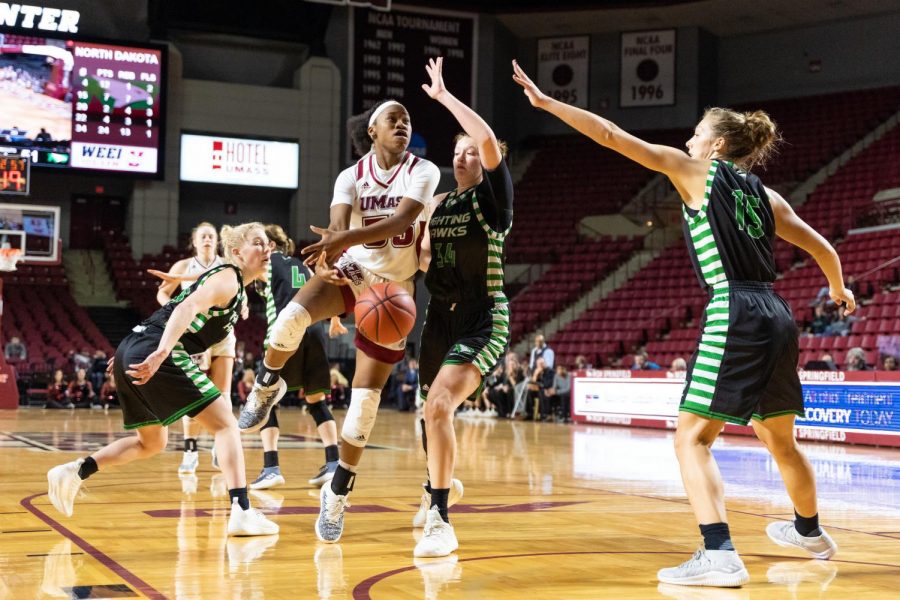 After handing Davidson its first Atlantic 10 loss of the season Sunday, the Massachusetts women’s basketball team will look to continue its winning ways versus St. Bonaventure on Saturday.

Unable to build any sort of consistency in A-10 play so far this season, alternating wins and losses through the first five games, the Minutewomen (11-8, 3-2 A-10) know they must come in with the same mindset from Sunday to have success against the Bonnies (4-14, 1-4 A-10).

“I expect us to come out with great energy, focus and determination from the jump,” said Destiney Philoxy. “That same mindset we had against Marist, against any other team. We got to win from the jump. If we want to win, we’re going to win.”

Much of the UMass success on Sunday can be attributed to their stout defensive effort. The Minutewomen repeatedly altered their defensive sets, confusing the Davidson offense and forcing 15 turnovers in the game. Switching these sets also prevents other teams from utilizing the entirety of the 30 second shot clock.

“It all depends on our opponent,” said Verdi when asked if the team would continue mixing their defensive sets on Saturday. “We felt that we wanted to keep Davidson uncomfortable and a little bit confused and it worked out for us. It’s a scout thing. We like mixing it up. We never want our opponent to feel comfortable and execute offensively.”

“By keeping them a little bit confused on what we’re running defensively, it hurts them because they start their possession late,” continued Verdi. “They start getting their [offense running] with 16, 17 seconds left on the shot clock because they’re trying to figure out what we’re in.”

To stop St. Bonaventure on offense, UMass will have to limit the scoring attack of guards Mckenna Maycock and Deja Francis. The backcourt duo is leading the Bonnies in scoring with 10.4 points per game apiece.

UMass will get a boost from the emergence of guard Vashnie Perry, who has become a standout leader for the Minutewomen since first joining the starting lineup in the Minutewomen’s December 21st loss to UMass Lowell. Perry led UMass with 18 points against Davidson and will get the start against the Bonnies.

Despite the Bonnies’ poor record on the year, Verdi and the Minutewomen aren’t underestimating Saturday’s matchup.

“I know their record doesn’t reflect who they are as a team but they’re right there,” said Verdi. “They beat George Mason at George Mason, and they’ve been right there. A couple of possessions here or there and they win more games. They’re talented so we just have to do a great job of rotating defensively and being in front of the basketball.”

Perry certainly isn’t taking her opportunity in the starting role nor the matchup against St. Bonnies for granted.

The Minutewomen are set to tipoff at 2 p.m. against St. Bonaventure at the Mullins Center on Saturday.