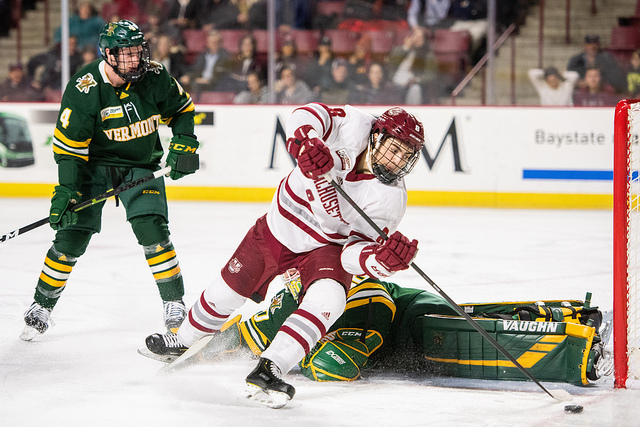 In the first matchup of its 16-game Hockey East Association schedule, the Massachusetts hockey team overcame a slow start and soundly went on to defeat Vermont, 4-1, on Friday at the Mullins Center.

Spurred by a trio of goals in 12:18 and significant contributions from its bottom six forwards, No. 2 UMass (16-3-0, 8-1-0 HEA) found its stride in the second never looked back en route to two points.

Forwards Brett Boeing, Oliver Chau, Jake Gaudet, and Jacob Pritchard each scored in UMass’ 16th win of the season. Chau and Gaudet potted on the power play, while Pritchard ended it with an empty netter.

“It’s always good to win,” UMass coach Greg Carvel said. “Some are better than others. For whatever reason, the team is missing a little bit of a spark that we seemed to have lost at the break. Combined with a lot of sickness going around our team, I just felt that we played well enough to win tonight.”

With that spark missing, Carvel said, it was a major chance for select skaters to step up; and they did.

“Some guys in the bottom of our lineup really helped us tonight,” he said. “I thought Niko [Hildenbrand] was excellent, then we get goals from Boeing, Chau, and Gaudet — guys who haven’t scored a lot this year for us. I’m saying ‘the usual suspects’ [after] a lot of games, but tonight wasn’t the case. I thought we had a lot of guys who we don’t usually talk about that were the guys that made us win tonight.”

John Leonard recorded a pair of assists bringing his career point total to 50 in 52 games.

After both teams were slow out of the gates in the first, UMass found its skates in the second.

Five minutes in, when Bobby Trivigno got things going by accelerating past a pair of defenders and putting a move on Lekkas, Boeing flew into the slot and tapped home a bouncing puck for the lead.

Following Boeing’s fifth of the year and first since Nov. 10, Chau found positioning in front of the net.

With the winger in the slot, Mario Ferraro — who remains goal-less in his sophomore campaign — delivered a crisp pass, which Chau turned into a deke and rifled a shot past Stefanos Lekkas (27 saves).

Gaudet notched his third of the year seven minutes later to amass a three-goal lead in the middle frame.

After Pritchard sent a shot on net from the faceoff dot, Gaudet, alongside a slew of sticks and skates, utilized his 6-foot frame to find room in front of Lekkas, where the puck bounced off his skate and in.

“I didn’t really see the puck,” Gaudet said following the win and his third goal of the year. “ I thought it was kind of an iffy call, they probably could’ve called it either way, but it was nice to get a goal.”

After Liam Coughlin got one back for Vermont and made things interesting at the start of the third period, Matt Murray (25 saves) showed up at the exact moment that UMass needed him the most.

Highlighted by his third-period stops, the sophomore improves to 13-1-0 and boasts a .933 save percentage.

“I think the biggest thing is just increasing my battle [level] both in games and in practices, especially in practices this year,” Murray said. “I was challenged by the coaches to make that next step and I’ve been working towards that and I can see it paying off on games.”

While fighting off an onslaught of winter illnesses and attempting to rediscover the spark that spurred them in the first half, the Minutemen face a tough test when they faceoff with UVM again on Saturday.

“Half the team’s sick,” he said. “I go into the locker room and everybody’s coughing and sneezing. We’re in a little bit of a rut here, but it’s fine. We’ll work out way out of it. We need to be better tomorrow.”

Puck drop for Saturday’s back half at the Mullins Center is set for 7 p.m.