A year after Parkland 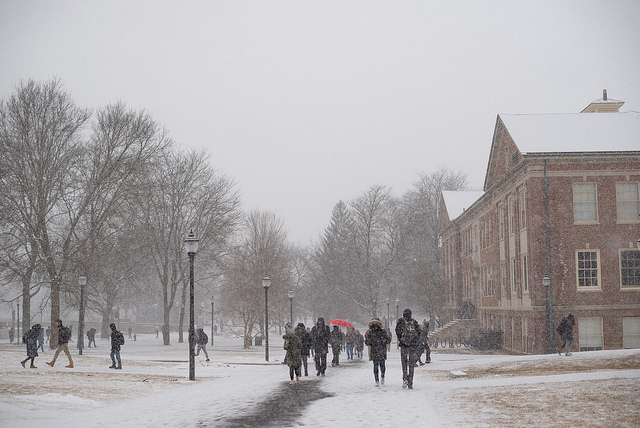 By 2:27 p.m., 31 people lay bleeding throughout the halls and classrooms. Of those people, 17 would die.

It is the great American tragedy – and certainly a story familiar to Americans across the country. The “troubled lone wolf,” ostracized by his peers, takes action and takes lives. School shootings in the United States are such a commonality that they don’t always make the mainstream news cycle. In 2018 alone, there were 23 school shootings resulting in death or injury. In a typical 180-day school year, that translates to a shooting about once every eight days. That should horrify you. Students are being shot at in cold blood in a place which is supposed to be safe for students to learn and develop.

And it’s not just schools. According to the Gun Violence Archive, as of Feb. 19, there have been 43 mass shootings in the United States in 2019. In a developed country, particularly one that touts itself as a powerful state with control over its population, this is shocking. Why do Americans shoot each other so much? The answer is argued by our elected officials in Congress and more frequently by citizens.

When tragedies involving gun violence occur, Second Amendment rights advocates are quick to place blame on mental health issues and mentally-ill people. Anti-gun violence advocates point to the accessibility of automatic weapons. The reality lies somewhere in limbo between these two points of view. Mental health should be considered on a case-by-case basis; gun violence and mental health are not necessarily correlated. The almost weekly cases of young children shooting their parents or themselves with easily accessible weapons are not tales of the failing U.S. mental health support system. They are tragic stories of irresponsible gun ownership.

The blame for mass shootings cannot solely be placed on weapons. Yes, reducing firearms sales would ultimately result in less death by guns, but responsibility must be placed on the people who purchase and use said weapons. Background checks are more than necessary in working toward preventing gun violence. Individuals with a violent past or a history of potentially dangerous mental illness should not be allowed to purchase weapons – and those who do purchase weapons should be required to register their guns and partake in firearm safety classes. The implementation of these measures cannot stop all mass shootings, but they are certainly important steps in working toward preventing gun violence.

I am not of the opinion that firearms sales should be banned in the United States. I believe measures that drastic would not be entirely effective. Americans love their guns, and if gun sales were outlawed, Americans would find ways to make their own guns. These methods would most likely be both illicit and dangerous – think of the market for illegal drugs. Drugs like cocaine are very much illegal in the United States, and yet there is a massive opioid crisis going on. If firearms sales are banned, people will still find ways to make their own weapons, and those weapons will be more likely to do damage. Bump stocks, although now banned, are an example of this trend already occurring – rifles are modified to shoot more rounds faster. This is what allowed the gunman involved in the 2017 Las Vegas shooting to kill 58 people so quickly.

However, I do believe semi-automatic weapons should not be sold on American soil. There is no reason for an average citizen to have access to an AR-15 – the new “weapon of choice” for mass shooters. We have seen them used in Las Vegas, Parkland and most recently, the Pittsburgh synagogue shooting. These weapons are meant for trained soldiers and should remain in their hands.

After the Parkland shootings, we were promised change. A year later, it seems like everything is the same. But there is still hope for progress. The students of Marjory Stoneman Douglas have taken the helm of activism, and their efforts are admirable. Lobbying for gun control was a key factor in the newly-Democrat controlled House of Representatives working to pass legislation which would expand background checks to “nearly all firearms purchases.” This is a step in the right direction. However, if the bill makes it through the House, it will most likely face challenges in the Republican-controlled Senate. In the meantime, Americans will die as a result of gun violence.

I am not anti-gun. I am pro-survival. I am pro-education-without-fear-of-being-shot. I am pro-not-worrying-about-my-little-brother-not-coming-home-from-high-school-alive. Whenever these tragedies happen, we send out thoughts and prayers. We tell ourselves, “never again.” Yet nothing gets done. Thoughts and prayers and retweets of sad infographics do nothing to change gun laws. When is enough going to be enough? When will we as a nation finally move toward gun reform and away from unfathomable violence?