The junior’s confidence has grown 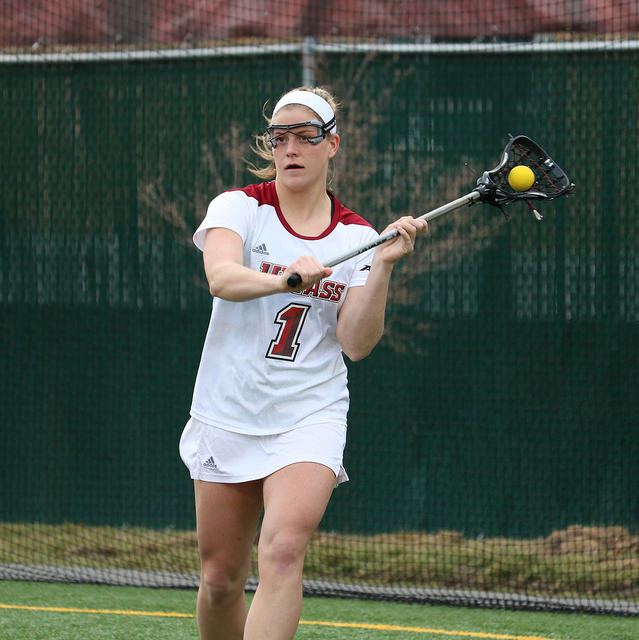 On April 28, 2018, Garber Field hosted Senior Day for the Massachusetts women’s lacrosse team. Nine seniors were honored during a pregame ceremony, preluding what is to be a major leadership overhaul between now and the start of the 2019 season.

Fast forward almost 10 months and you’ll see a brand-new team practicing on the Garber turf. The show-stopping duo of Holly Turner and Hannah Burnett is no longer leading the Minutewomen.

However, a familiar face is now ready to take over at the helm. It’s Kaitlyn Cerasi’s time to shine.

“This is the most confident I’ve seen her since she’s been here,” said head coach Angela McMahon.

Now entering into her junior year, it’s no secret Cerasi took a couple years to break out of her shell.

“I mean, she was pretty quiet,” said McMahon on her first impression of Cerasi. “She really didn’t say a lot.”

That same quietness gave Cerasi the ability to watch and observe for her first couple of years, knowing she would potentially have to prepare for a new role—a more vocal role—down the road.

“She’s not super loud or going to dominate [over others] in any conversation,” McMahon said. “But when it’s time for her to speak, she has no problem with doing so.”

Cerasi scored 69 points for the Minutewomen last year, third in offensive production behind only Turner and Burnett. That effectively makes Cerasi the player to watch this season as UMass looks for someone to fill the space in the scoresheet left by her predecessors.

Fittingly, the once reserved freshman doesn’t feel the need to try and score on every play. Cerasi’s 30 assists last season reinforce the type of player McMahon sees her to be, the ultimate “feeder.”

“She sees the field really well,” McMahon said. “She’s a great teammate; she’s very unselfish. We really try our best to be a team offense and not, necessarily, have that one go-to player.”

If that’s the team mentality McMahon preaches, then Cerasi fits the system to a tee. Often found sunk below the goal line during play, she’s able to dish out quick passes to teammates, much appreciative of her efforts. Just ask redshirt senior, Kiley Anderson, who scored 47 goals for the Minutewomen last season.

“Having Kaitlyn behind [the net] on the left side is one of the best things about our offense,” Anderson said. “She just has such a drive and such a niche to hit the open girl. I think she also has a great balance of knowing when it’s the right time to feed and when it’s time to drive to the cage.”

Cerasi’s participation in all aspects of the Minutewomen offense makes her the most well-rounded attack position on the roster. She had six games last season where she scored at least five points, along with three seven-point games.

“Obviously there’s a range of skill and ability, however, she wants her teammates to be just as successful as her,” McMahon said. “I think she understands her role really well, in that, when she has opportunities, she has a green light all the time. We have full faith and trust in her.”

The kind of player-to-coach connection Cerasi has built with McMahon is one that shouldn’t be taken for granted. McMahon is as competitive as coaches come, winning seven Atlantic 10 titles in her eight years at UMass.

“She checked all the boxes for us,” said McMahon on brining Cerasi to UMass. “As she got older and more confident, you started to hear her speak out more and more.”

Now, McMahon speaks about getting the opportunity to sit down with Cerasi every week to bounce ideas off each other. Player and coach, teaming up in a most symbiotic relationship, willing to routinely go over different strategies and game plans that will hopefully give them the competitive advantage.

A rough time to take over as team leader, Cerasi will try to spark a UMass team that was upset by Richmond in last spring’s A-10 championship. The loss of multiple veteran players on this UMass squad will see Cerasi, with help from Anderson, pulling together a predominantly young team.

“I think we’ve been taking steps all fall, working on our leadership on the attacking end,” Anderson said. “We definitely have a lot of pressure [stepping up as leaders], but we’re really excited to work toward it.”

Cerasi, specifically, looks to work toward filling the large shoes left behind by Turner.

“We had our wings; Holly [Turner] was my wing player,” Cerasi said. “She would just teach me things like the importance of when to drive and when to feed.”

One thing most—if not all—successful teams have is good chemistry. One thing the now-graduated Burnett did so well last year was to keep the mood light. She knew lacrosse was important to every girl on that team, but she believed they should be able to escape that mentality at the end of the day. Cerasi wants to bring that same energy under her reign.

“On game days we’ll do team lunch either before or after games,” Cerasi said. “Before games, we’ll try to hype each other up in the locker-room, play music and everything.”

Even though the turnover on the team is significant this year, Cerasi isn’t worried about problems with the team not meshing. She compared the Minutewomen to one big family, knowing everything about one another, and spending lots of time with each other.

“I think the biggest thing is that we have each other’s back, especially when we’re on the field,” Cerasi said.

For any player to excel in one particular area—leading, shooting, passing—of the game is pretty special, but to have all of them is rare. Cerasi is an example of a player that can do it all, standing out in not just one, but multiple facets of the game.

“Kaitlyn’s one of those people where you can, literally, count on her to work hard every single day,” Anderson said. “She just does everything right.”