Crowd of 3,000 gathers in Southwest after Patriots Super Bowl win

One head injury and two hand injuries reported by UMPD 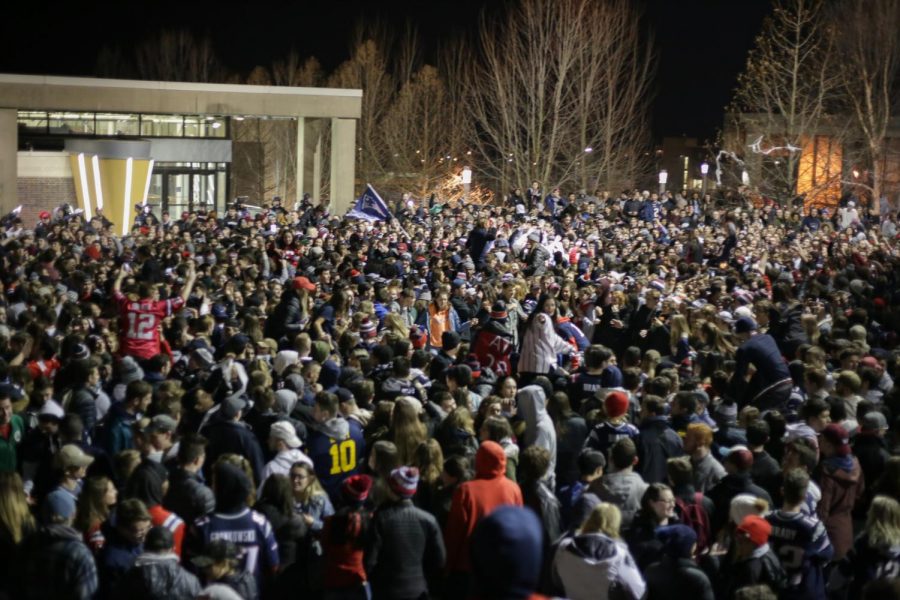 By Abigail Charpentier and Hayley Johnson

A cheering crowd of 3,000 flooded to Southwest Residential Area at the University of Massachusetts after the New England Patriots won Super Bowl LIII 13-3 against the Los Angeles Rams.

No arrests were made following the game, according to Edward Blaguszewski, executive director of strategic communications for UMass News and Media Relations. One head injury and two hand injuries were reported.

The UMass Police Department said the crowd was “exuberant and primarily peaceful,” according to a press release from Blaguszewski.

People began to gather in Southwest in front of Berkshire Dining Commons after the game ended at 10:04 p.m. UMPD officers lined the perimeter of the crowd, intervening when people attempted to climb trees and structures. The crowd peacefully dispersed before 11 p.m., according to Blaguszewski.

A police officer asks a woman to come down from a tree by Berk in Southwest #UMass @MDCollegian pic.twitter.com/gPhti7zPFF

UMass student is searched and detained by UMPD after climbing a tree with a bottle of alcohol. #SuperBowlLlll @MDCollegian pic.twitter.com/uUivauhjc5

After roughly 40 minutes of celebrations police at #UMass begin to disband the crowd and send those celebrating the Patriot’s #SuperBowILIII victory home. @MDCollegian pic.twitter.com/C7fD85DERr

This is the third Super Bowl in a row that the Patriots have played in. Compared to the past two years, it was a calm crowd. Following the Patriots’ 41-33 loss to the Philadelphia Eagles in 2018, UMPD made six arrests and reported 12 medical transportations. Six residence halls on campus also reported $2,685 in property damages after Super Bowl LII.