Offensive coordinator was awarded for Minutemen’s prolific scoring in 2018 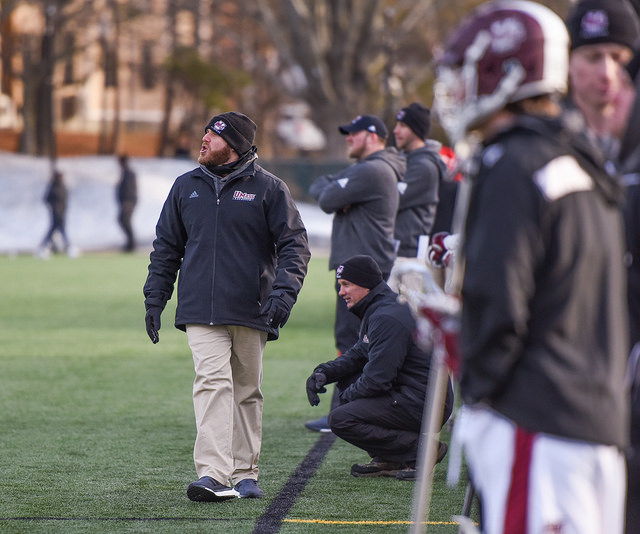 After a 2018 campaign that saw the men’s lacrosse team win their first CAA title and NCAA tournament appearance since 2012, while graduating just six seniors, the Minutemen are poised to repeat as CAA champions and make another run at the NCAA title. Much of the team’s success came from their offense, which was coached by associate head coach Doc Schneider.

Carr has since graduated, along with captain Jake Lisauskas, who notched 23 points as a first-line midfielder. Schneider emphasized that replacing the veteran leadership these two players provided would be crucial for the offense’s success this season.

“If we can make up for losing them and have the same type of leadership, I think we have a chance to be just as good [as last year’s offense] or achieve more,” Schneider said. “So that’s going to be the question mark that we need to be better at moving forward.”

Born and raised in Massapequa, N.Y., Schneider first started playing lacrosse when he was in seventh grade and was a baseball player prior to that.

“A guy in my town, Mr. Romao, tried grabbing a bunch of us to come over and play lacrosse,” Schneider said. “He said that cause I was a third-baseman I should try out goalie, since that means I had good reaction time.

Hesitant at first, Schneider eventually agreed to try out goalie and quickly fell in love with the position and the sport. By the time he reached high school, lacrosse had become a full-time commitment for Schneider and he was excelling in the cage for his high school team. However, he wasn’t a very sought-after recruit and had no Division I offers through his junior year of high school.

It wasn’t until the summer going into his senior year that Schneider got his big break. While playing at the Mid-summer Classic lacrosse tournament at UMass, Schneider’s play in net caught the attention of one of the assistant coaches on the UMass lacrosse team. The same assistant invited him to the Peak 200 All-Star lacrosse camp which was run by head coach Greg Cannella.

Schneider continued to impress at the camp and also showed off his intangibles, which is what Cannella believes set him apart from other players.

“He’s a fiery guy,” Cannella said, “and what always backed that up was that he was very confident in his own ability, extremely hard-working and very diligent in his preparation [as a player].”

Consequently, Cannella offered Schneider a scholarship to play for the Minutemen. Schneider mulled it over, but eventually committed to UMass after no other Division I programs made any offers.

In his inaugural season, the first-year goalie started in all eighteen games, winning thirteen of them and collected the second-most saves in the NCAA with 220. He also helped achieve the best season in the program’s history, as the Minutemen made their first-ever Final Four and National Championship appearance. In addition, Schneider’s fifty saves in the postseason earned him NCAA All-tournament team honors.

The next two seasons, however, turned out to be much more tumultuous for Schneider and the Minutemen. UMass failed to make it back to the NCAA tournament, losing 16 out of 28 games and finishing no better than fourth in their conference over the two seasons. The program was also plagued by off-the-field issues which carried over to the locker room and hampered team chemistry.

By the time Schneider’s senior year rolled around, he and the rest of his senior teammates wanted to “bring the program back to where we all thought it should be,” and restore a sense of pride in the team.

After a mediocre 3-3 start to the 2009 campaign, the team found a groove and won five of their next seven games. This set the Minutemen up for a showdown with favored Rutgers at their home turf for the conference title and trip to the NCAA tournament.

The game turned out to be what Schneider says he remembers the most when playing for UMass. With Rutgers having an early 5-1 advantage, the game looked to becoming a lopsided affair. But UMass battled back and completed the comeback in overtime to win their first conference title since 2005.

Across his four years, Schneider posted a .611 save percentage, second-best in the NCAA during that time, collected 34 wins, made the second-most saves in program history with 753 and earned All New-England team honors each year.

He also achieved a plethora of other accolades during his final campaign. Pulling in All-American honors, the first Minuteman to do so since 1989, ECAC Goalie of the year, UMass Male Athlete of the Year and was a Tewaaraton Award finalist for best lacrosse player in the NCAA.

Schneider’s decorated-collegiate tenure and supreme skill caught the attention of just about every lacrosse team in Major League Lacrosse. Shortly after his last game in a UMass uniform, Schneider declared for the 2009 MLL Collegiate draft. About two weeks later he was chosen with the 13th overall pick by the Toronto National and was the first goalkeeper taken off the board.

In the offseason, Schneider took a job as the defensive coordinator at his alma mater. At first, he tried to continue his MLL career but quickly realized it was no longer feasible.

“I played and it was great,” Schneider said. “But ultimately once I got into coaching I tried playing again and for me it was more of a balance in terms of recruiting. I was all over the place, my family is from Long Island, New York so I was seeing them and then every weekend I was gone. So I just didn’t really necessarily like the schedule of it all and honestly my best time playing lacrosse was at UMass.”

The opportunity to coach alongside Cannella and to mentor future UMass players was also something he felt required the most of his time and effort. Cannella also pointed out that coaching was a natural fit for Schneider after spending his entire lacrosse career in the cage.

“When I think back to Doc as a player, he was almost a coach on the field for us,” Cannella said. “He was in a spot as a goalie, as a leader, where he could control the defense and urge people to play hard and have a sense of urgency. Doc always did that, so I thought [his transition to coaching] was pretty seamless for him.”

After coaching defense for five years and helping develop two All-American defensemen, Schneider stepped down from his role as defensive coordinator to pursue a career opportunity outside of UMass. He later returned to the Minutemen the next season, however, as a volunteer assistant for the offense.

After one year as a volunteer, he took over offensive coordinator duties and has held the position since. This past year, Schneider was recognized by the Intercollegiate Men’s Lacrosse Coaches Association after his offense led the CAA and was top-ten in the NCAA in points, assists, scoring margin and scoring offense.

“I think he gives us a lot of freedom on the offensive end,” said Connolly. “He puts us one system, one offense basically and lets us run our own thing. It gives me a lot of freedom to do I what I want to do and to make my own looks and make my own plays. He puts a lot of trust in me and the other guys which I think is a lot different from other coaches who have a bunch of set offenses, set plays and stuff like that.”

With Schneider returning as the Minutemen’s offense coordinator for the 2019 season, this will now be Schneider’s 14th consecutive year with the program and 10th as a coach.

What Schneider loves most about coaching is being able to mentor players. He described the “togetherness” with these players as the next best thing to being able to suit up and play as a Minutemen during his goalie days over a decade ago.

“As a player what stands out about him is his competitiveness, his consistent energy and his passion for not only the game but his players,” said Lisauskas, who was a four-year letterman for the Minutemen and is now in his first season as a volunteer assistant coach for the program.

“To now be on the other side of that, he instilled those things into me as a player, so now we’re kind of like-minded and it’s pretty cool to have that mentorship, as well as a friendship now.”