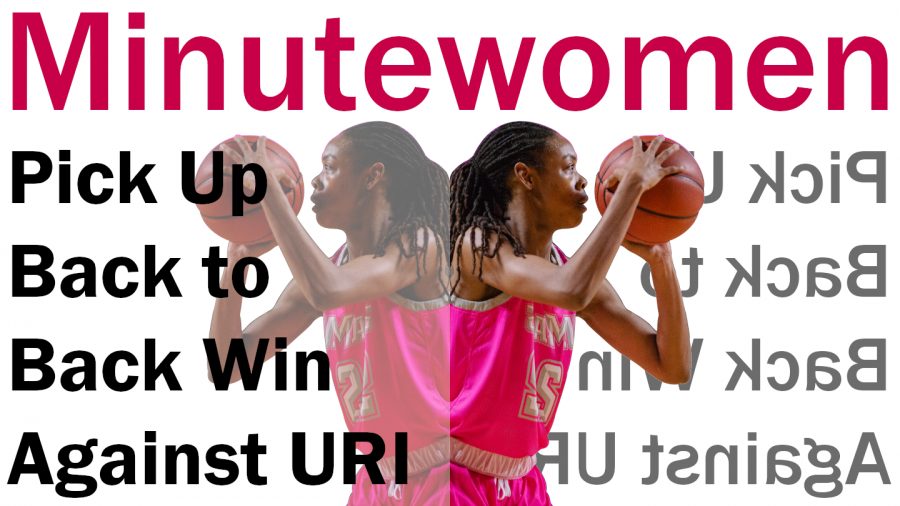 Following a down-to-the-wire victory over Duquesne on Thursday, the Massachusetts women’s basketball team continued to roll its momentum into Sunday’s matchup, earning a 56-34 win over Rhode Island Sunday afternoon at the Mullins Center.

UMass (13-11-0, 5-5-0 Atlantic 10) came out of the gate fiercely on defense, forcing the Rams (7-16-0, 2-9-0 A-10) to turn the ball over nine times in the opening quarter. Highlighted by a Vashnie Perry three-pointer followed by a Perry-drawn charge on the very next possession, the Minutewomen were able to blow open a 20-7 lead to start the game.

“I thought we came out and were trying to do all the right things,” said coach Tory Verdi. “We played really hard. Our defense and our want-to, I thought that was excellent. I thought that we forced them to quit.

“They got frustrated, I thought switching up our defenses hurt them, they were guessing, trying to figure out what we were doing,” he added. “I thought our kids executed our game plan perfectly. It’s just great to see and we forced that team to quit and took advantage of it down the stretch for sure.”

Perry led the scoring attack for the Minutewomen, tallying 11 points off the bench. Led by Hailey Leidel and Bre Hampton-Bey, the UMass starting five were able to rack up 12 steals in the game, with Leidel, Hampton-Bey, Destiney Philoxy and Jessica George all tallying three apiece.

At times, URI looked lost on offense. On multiple possessions, the dominance of the UMass defense forced miscommunication on the Rams’ side of the ball, resulting in 21 turnovers. Amidst its confusion, Rhode Island often passed the ball to unsuspecting teammates, throwing the ball almost directly out of bounds on a few occasions.

Though it struggled offensively at times—finishing a meager 5-for-22 from behind the three-point arc—the hot start from UMass helped it grow a comfortable lead early. Up by 17 at halftime, the Minutewomen knew jumping out to a hot start would mentally defeat the Rams before the final buzzer.

“We just kind of got the lead and ran with it,” said Leidel. “We kind of struggled on offense, just the flow of it and everything, but we knew if we got stops then it wouldn’t have really mattered.

“We just knew if we came out with a fast start too that they would kind of just give up, that was something that was in the scouting report,” she added. “We wanted to hit them really quick and just continue it for the rest of the game.”

The prowess on the defensive side of the ball prevented the Rams from registering a single three-pointer all day, shooting a bleak 0-for-19 from behind the arc.

By the fourth quarter, the game was all but over. Up 44-24 to begin the final frame, the Minutewomen didn’t allow Rhode Island to make a fourth quarter field goal until 2:20 remained, giving way to a blowout 56-34 victory for UMass.

“I didn’t think at any point in time we let up,” said Verdi. “We continued to push and execute on both sides of the ball and didn’t fall into their trap. We didn’t fall into that lull. For whatever reason they quit and we just had to continue to play basketball and I thought our kids did a great job of that.”

“It’s one of the best [wins of the season],” added Jessica George. “I think everybody came out with great enthusiasm, great intensity. We were all very energetic before the game. It showed very well on the court, it was a great win.”

With the season nearing its climax, back-to-back wins have the Minutewomen hitting their stride at the right time. Verdi has been preaching all season that when the team plays for the entire 40 minutes, they can play their best basketball. Leidel sees Verdi’s wish coming to fruition.

“I think the last two games we were pretty consistent the full 40 [minutes],” said Leidel. “Even our practices have gone really well too, we haven’t had those dips that we sometimes do. I mean that was one of our focuses so it’s good to see that growth.”

The Minutewomen will head to Philadelphia to take on St. Joseph’s on Wednesday. Tipoff is set for 7 p.m.