Kasich expressed the importance of bipartisan work and collaboration 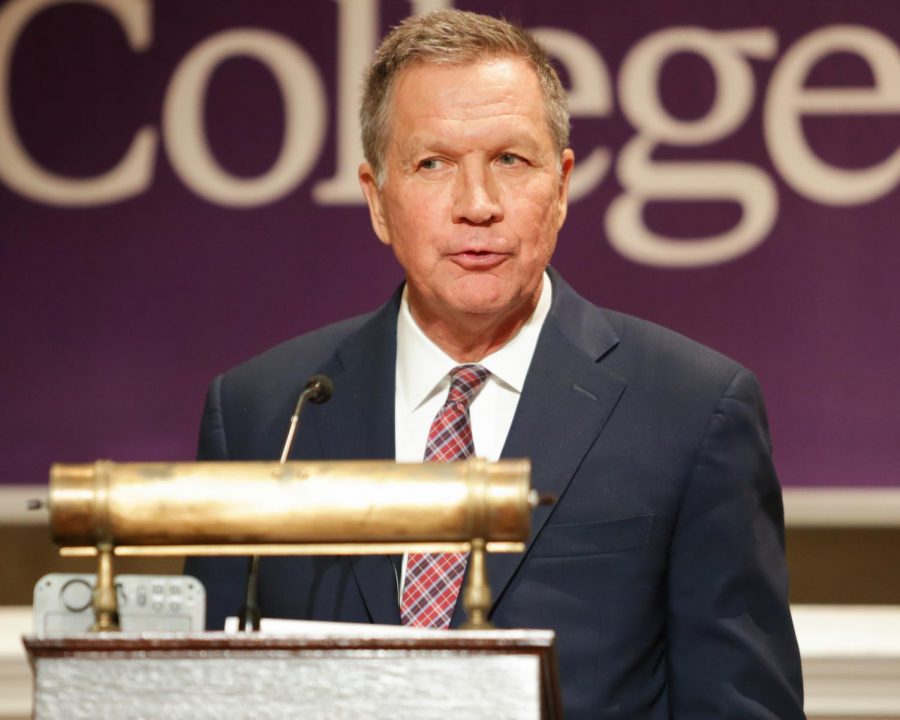 On Thursday night, Amherst College hosted John Kasich, former governor of Ohio and Republican presidential candidate, at the Johnson Chapel to speak to students and the Amherst community about his personal journey through politics.

Kasich, a member of the Republican party, served as the governor for two terms and as a member of the United States House of Representatives for 18 years. Amherst College Board of Trustees Chairman Andrew Nussbaum introduced Kasich, saying that the former governor has interests and pursuits in common with current and future graduates of the college.

The talk stretched beyond discussing policy issues, as Kasich focused on pushing his audience to take chances, work together and commit to bettering the future of our country. He stressed to the audience that changing the world can start from just improving one life.

“Why don’t we change the world where we live? Why don’t we figure out what we can do to live a life a little bigger than ourselves?” Kasich asked. “Let it start right here in this precious town and let it spread across the nation.”

Taking a personal tone, Kasich started his talk by telling a story from his freshman year of college. Through coming in contact with his university president, he was able to get a letter delivered to then-President Richard Nixon, who later invited him to the Oval Office for a short one-on-one meeting. Of this, Kasich reflected, “Ask until they tell you ‘no’…You never know. Dreams come true. Amazing things can happen.”

Speaking on his experience in politics, Kasich asserted to the audience, “Don’t ever let anyone make you into a victim, because you control your destiny and you can’t be bitter or angry when things don’t go your way.”

Later in the talk, Kasich attempted to motivate listeners by encouraging them to focus on improving the communities around them and building their personal relationships, rather than arguing about the politics of the federal government, asking, “Does it really matter what the president of the U.S. does?”

During the question and answer portion of the talk, the former governor received pushbacks from students in the audience. Rogelio Oliva, an Amherst College senior studying biology and environmental studies, asked Kasich to acknowledge the privilege in his statement, saying that “the transgender community, immigrants, women, people of color, are routinely harmed by the decisions of the national government.”

Oliva also noted that Kasich’s home state has a large population of incarcerated individuals and advocated for justice in the country’s prison system.

Kasich responded by citing some of Ohio’s prison reform projects that work to keep recidivism rates low within the state.

“Really my point was to engage him in a conversation, so I wasn’t too concerned with what he was going to say. I do think that he was able to have a very good response to my question,” said Oliva afterward.

Junior sociology major Samantha Schriger asked Kasich about his thoughts on climate change, also mentioning in her question the Republican party’s lack of acknowledgement and action on the issue.

“The Republican Party is my vehicle, not my master. I don’t have to defend what these other people are doing” Kasich responded. He also spoke about his personal history of fighting for the environment, even encouraging Schriger by saying, “stick with your concern about the environment because it’s important and we can’t lose it.”

Afterward, Schriger expressed some disappointment with his response, “what I felt is that he latched onto a statement that I made about the Republican party…and so instead of answering my question about what we should do… he just said that he doesn’t want to be lumped into the party.”

Visiting McCloy professor in the Amherst College history department Mark Jacobson reflected on the student questioning period, saying, “What I took away as a professor is that it was made clear to me what the student priorities are on campus.”

Another point stressed by Kasich was the importance of bipartisan work and collaboration from different sides of the political spectrum, something also touched on by Beneski during the lecture introduction, saying “at Amherst College we enjoy learning from a broad range of perspectives.”

“One of the biggest problems we have today is that we are unwilling to put ourselves in someone else’ shoes…slow down, talk to people,” said Kasich. He added, “keep your mind open.”

At the end of the event, Jacobson commented, “I think it is critical that [students] are exposed to seeing senior political leaders, whether you agree with them or not.” He furthered, “[Kasich] was trying to say that any individual can make a disproportionate impact. That was wonderful and that’s what [students] should take away from this.”

Editor’s note: An earlier version of this article incorrectly named Ted Beneski as the Amherst College Board of Trustees Chairman.