UMass hockey with three games remaining in the regular season 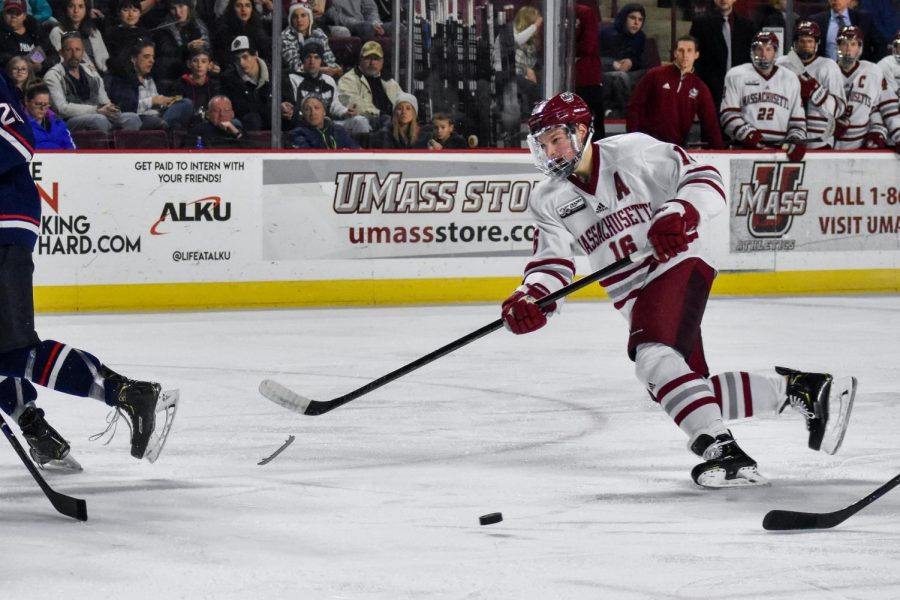 I’m back answering your mailbag questions on the Massachusetts hockey team after a two-month long hiatus. At this point in late February, No. 2 UMass has secured the most wins in a season in program history and clinched home-ice advantage for the first round of the Hockey East Playoffs.

Three regular season games remain before the Minutemen hope to embark on an extended postseason run. Without further ado, let’s get started!

Question: @MatthewParent1 asked, “How has Bobby Kaiser’s injury impacted the team? I know there’s a fair amount of shuffling on the lines all the time, but he seemed to be hitting a stride and establishing some consistency up until the injury.”

Answer: I agree, I think Kaiser was beginning to find his game at the college level before he suffered a shoulder injury against UConn on Nov. 30. Prior to that, Kaiser scored in two of the previous three games and was starting to make his presence felt on that fourth line.

To answer the question, in the grand scheme of things, I don’t think his absence has really impacted UMass in any significant way. Offensively, the Minutemen are very top-heavy with Jacob Pritchard, Cale Makar, Mitchell Chaffee and John Leonard all contributing 30-plus points, so it’s not like Kaiser was a significant source of offense that suddenly had to be replaced.

Kaiser’s size and strength came in handy for an otherwise small-ish Minutemen team and I think that’s what UMass has missed the most from No. 11 being gone. At 6-foot-2 and 192 pounds, Kaiser could throw his body around and cause problems, especially along the walls in the attacking zone.

Coach Greg Carvel has shuffled the bottom two forward lines all season and he mentioned Kaiser when talking about why he moves those bottom six guys in and out of the lineup so much this past week after practice. Carvel said he’s looking for guys to compete hard on the third and fourth lines and with Kaiser not available, the pool to choose from has shrunk a bit.

A: Well, early last week it was revealed that UMass will be traveling to Colorado to face Denver for a two-game series next season. Carvel then announced on Twitter that the Pioneers will be returning the favor for a two-game set in Amherst the following year.

As far as other non-conference teams, you would have to imagine there will be at least a couple ECAC teams mixed in. For some reason I feel like Union will be back on the schedule next season after the two teams met twice last year with both games being held in Schenectady. Quinnipiac wouldn’t shock me either as both games this year were battles. Brown could be a possibility as well with former volunteer assistant James Marcou serving as an assistant coach for the Bears, and I’ll throw Clarkson in there too just because I think it would be an intriguing matchup for the Minutemen.

AIC will probably be back on the schedule since the Yellow Jackets are on the rise and serve as the only other Division I team in Western Mass. Look for other Atlantic Hockey teams like Holy Cross, Army or Bentley to be featured also.

After that it gets tricky because teams in the NCHC, WCHA and Big 10 are all far away so it’s more of a matter of what coaches have a familiarity with one another to schedule such games. Associate head coach Ben Barr held the same position at Western Michigan before coming to UMass, so that could very well spark the two teams seeing one another at some point.

Personally, I would love to see traditional powers like Minnesota, Michigan, Wisconsin or North Dakota come to Amherst. With the Minutemen making their case as a nationally-competitive squad, playing teams that have ruled the college hockey world would be a cool sight to see, in my opinion.

Q: @jillflanders asked, “[Could you] explain the whole Hobey Baker voting? Since this is another first for UMass, the fan vote is not the whole enchilada. From most national hockey writers I’ve read, Cale Makar is the front runner. By a lot.

A: I wasn’t exactly sure how this worked either until I did some research.

According to the Hobey Baker website: “The selection process for the award is in three parts. First, the head coaches of NCAA Division I schools nominate the top three players in their league and the top three players in the nation. College hockey fans can also vote online at this time — and fan voting can be an important factor in the balloting outcome. Price Waterhouse Coopers tabulates the votes and the top 10 candidates are announced.”

After this, the “Hobey Hat Trick” — the three finalists — are selected by a 27-member committee made up of media members, coaches and scouts.

Then, the winner is announced during the Frozen Four.

Q: @sonofLargeMark asked, “If you had your druthers, [is UMass] going to Manchester or Providence for the first round of the tournament?

A: Every week for the past month or so USCHO.com has released a bracketology piece that breaks down which teams would make the NCAA tournament and where they would play in the regional round.

In every post that I’ve seen, UMass has been slotted in the Northeast Region in Manchester. I honestly don’t have a complete understanding of how the placement works but from what I’ve read, it has to do with distance the prospective team would have to travel.

There’s still a lot of hockey to be played and nothing is final just yet, but I think the competition among the regions is just as, if not more important than where the games are actually played.