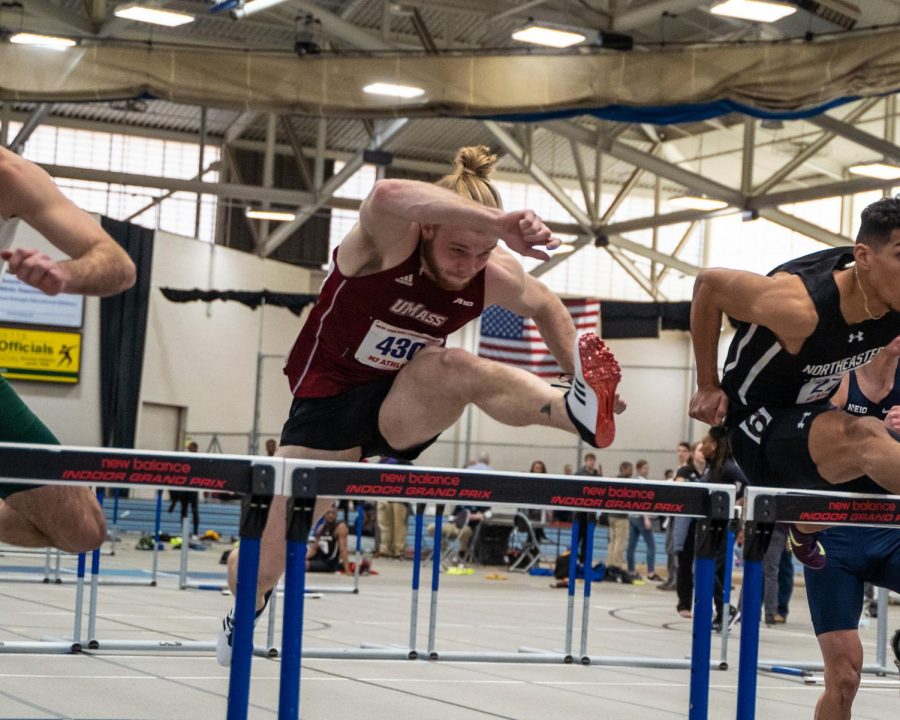 This past weekend, the Massachusetts track and field teams concluded their indoor campaigns with the pinnacle of their season, competing at the Atlantic 10 championships in Fairfax, Va. The Minutewomen finished third overall and the men placed sixth.

Earlier this season, women’s head coach Julie LaFreniere said she expected Jada Harris and Emilie Cowan to “dominate” the A-10 championships, and Harris and Cowan proved her right.

Harris doubled-up by winning the 60 meter hurdles and high jump. Her mark of 8.45 in the hurdles tied the A-10 women’s record and broke her own school record in the event, while her jump of 5 feet, 8 inches tied a season best. Teammate Samantha Thompson cleared 5 feet, 5 inches to earn a bronze medal.

Cowan continued her dominance in the 500 meter, winning the event with a 1:13.01 split and also ran the second leg for the 4×400 team that finished fifth.

Also earning gold was senior Bridget Deveau who repeated as A-10 champion in the pentathlon and also broke her own school record with 3,869 points. Sophomore Kira Kopec took home bronze with 3,495 points, while classmate Emma Jones earned seventh.

In the 1,000 meter, freshmen Alexina Hurley and Colette O’Leary collected fourth- and eighth-place respectively, in addition to each helping the 4×800 team to a sixth-place finish.

Other notable performances for the Minutewomen included Danielle Notarfrancesco, who earned a silver medal in shot put after a toss of 44 feet, five inches, and fellow sophomore Lauren LaDere, who threw for fourth place with a mark of 43 feet, seven inches.

For the men’s team, juniors Jonathan Collins and Mason Lord were the top performers at the A-10s. Collins earned his second straight A-10 heptathlon gold medal after finishing with 5,137 points, while Lord broke the program’s pole vault record after clearing 16 feet, 1.3 inches for a first-place finish as well.

Head coach David Jackson emphasized Collins’ and Lord’s preparation prior to the championships as a key factor for their success.

“My job as a coach at these meets is to sit back and help them where they need,” Jackson said. “The work’s already been done, I can’t really change anything or give them any sort of newfound wisdom amidst the competition. So that was all [Lord and Collins], I was just supporting cast for them.”

On the track, Michael Cuthbert (22.07 seconds) and Jordan Howard (22.32 seconds) collected points in the 200 meter with fourth- and seventh-place finishes. Howard also placed fifth in the 60 meter dash with a 6.99 second mark.

The distance medley, 4×400 and 4×800 relay teams all raced well, finishing at sixth, seventh and fifth in their respective events.

With both teams not competing at the IC4A championships this season, the indoor season is officially over. Each squad will return to competition until the outdoor season begins in late March.