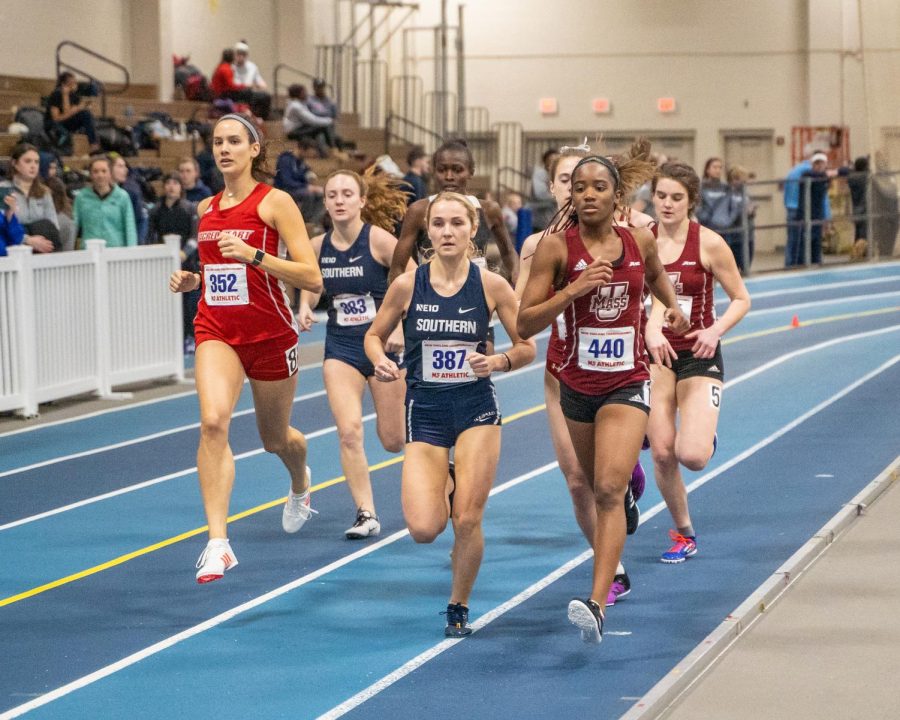 With the Atlantic 10 championships just two weeks away, this weekend was the last time for the Massachusetts men’s and women’s track and field teams to post solid results. Led by juniors Michael Cuthbert and Jada Harris, each squad was able to do just that.

Cuthbert broke the UMass 200-meter record, which had stood since 1998, with a 21.44 mark and fifth-place finish at the David Hemery Valentine Invitational. Meanwhile, Jada Harris won the 60-meter dash and 60-meter hurdles in 7.90 and 8.61 seconds at the University of Rhode Island Coaches Tribute meet.

Harris’s victories were just two of four for the Minutewomen at the Coaches Tribute meet. Danielle Notarfrancesco won the shotput event after the sophomore threw for a season-best of 46 feet, 11.75 inches. Lauren LaDere placed fifth in the same event with a 42 feet, 4.75-inch toss.

Ivan Nyemeck secured the women’s final first-place finish in the triple jump with a leap of 36 feet, 11.5 inches, while Emily McDonald placed fourth with a jump of 36 feet, 3 inches.

In addition to Cuthbert’s record day at the Valentine Invitation, the Minutemen at URI were able to post good results in their final competition until the A-10s – especially the upperclassman.

“I think overall we have a lot of guys, who are either juniors or seniors that should be out there [at A-10’s] at the front of the pack, it’s just a matter of us competing when it comes time to compete,” said coach David Jackson when asked on who he thinks could have a great performance at the conferences.

For field events, Evan Burton won the weight throw after tossing a personal record of 57 feet, 9.5 inches. The result is also the fourth-best throw of all-time in program history. Burton also placed eighth in shotput, while Costen O’Brien earned fifth in weight throw after a 52-foot heave.

Rounding out the field events for the men was Myles McDermott in long jump and Nathan Adeyemi in triple jump, with each senior earning second-place for their efforts.

Each team will now wait until Saturday to compete at the A-10 Championships in Fairfax, Virginia where George Mason will host. Events will start at 9 a.m. and will continue throughout the weekend.

Sean Richardson can be reached by email at [email protected].